What a scorcher! So far June has been a bit of a washout in Scotland, but the very first weekend in June was hot hot hot! There was not a cloud in the sky for Steven & Janey’s wedding day.

My lovely couple met around 5 and a half years ago via a mutual friend. Such was the attraction that Janey, a Glasgow girl at heart made the move through to Stenhousemuir to be with her love. The pair settled in together with their much-loved pooch, Cooper.

Steven proposed on Janey’s birthday. In fact, he was so keen to pop the question he jumped straight out of bed that morning and got down on one knee. Janey at this point was none the wiser, she thought that Steven had lost something and was rooting around on the floor for it. Meanwhile, Cooper was running around the room with a pair of Janey’s knickers!! Once she realised what was going on – it was quite the lovely surprise!

So Hot, Must Hydrate!

As I arrived at my usual parking spot for Falkirk Registrar’s Office I caught a glimpse of grey tartan kilt heading into Behind the Wall (a well-known watering hole in the vicinity). The sun was at its peak in the sky and it was pushing over 20 degrees (heatwave time in Scotland).

Steven, his best man Brian and the rest of the parched guests made it out just before Janey arrived. 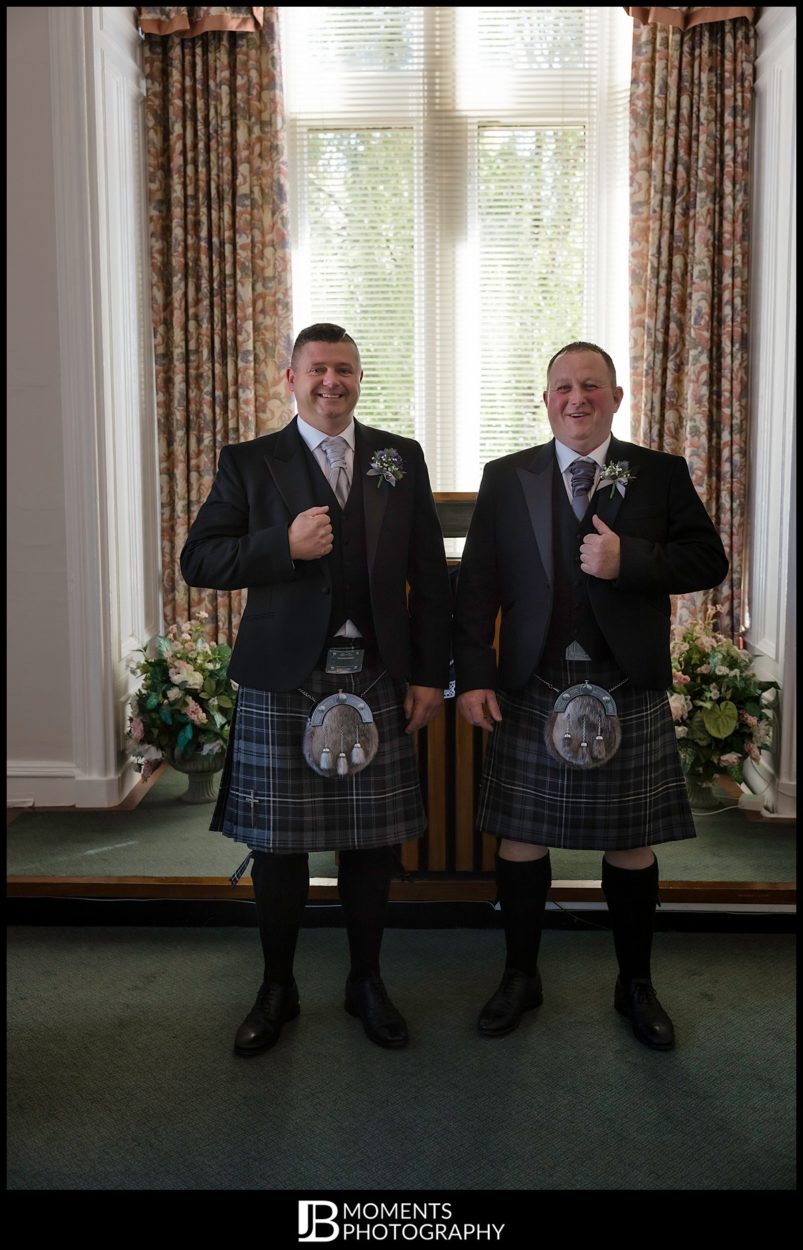 Looking and feeling much better having rehydrated. 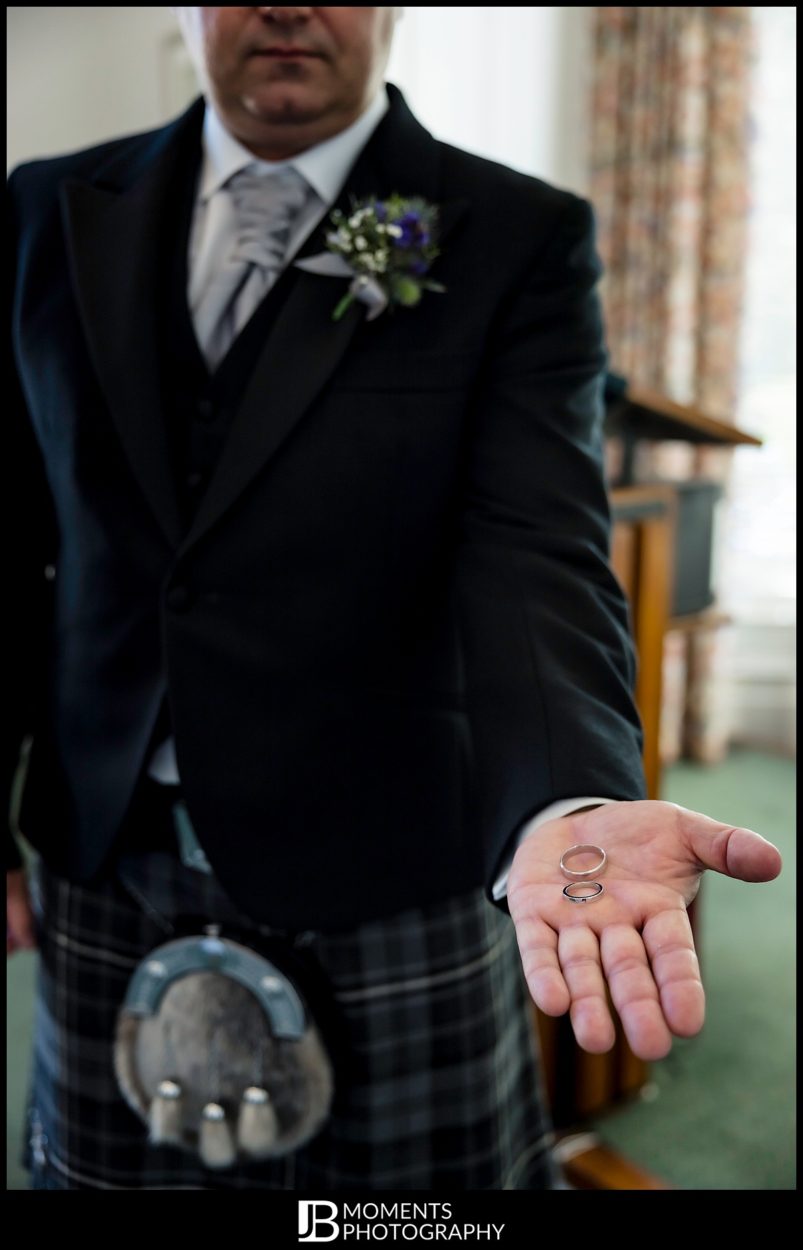 Having both been married before, my couple were keen to get to the husband and wife bit. 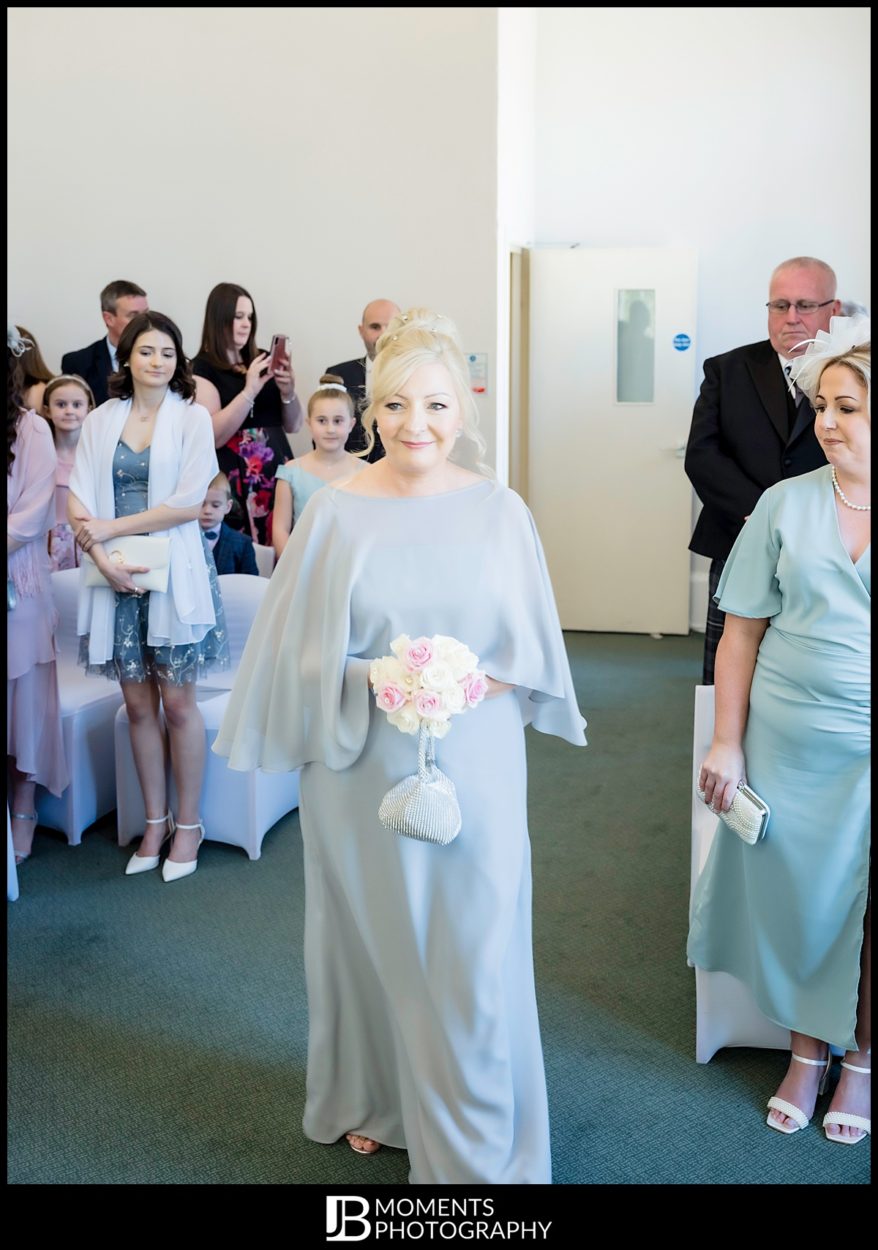 And Janey’s Dad looked so proud to walk his beautiful daughter to his new son-in-law. 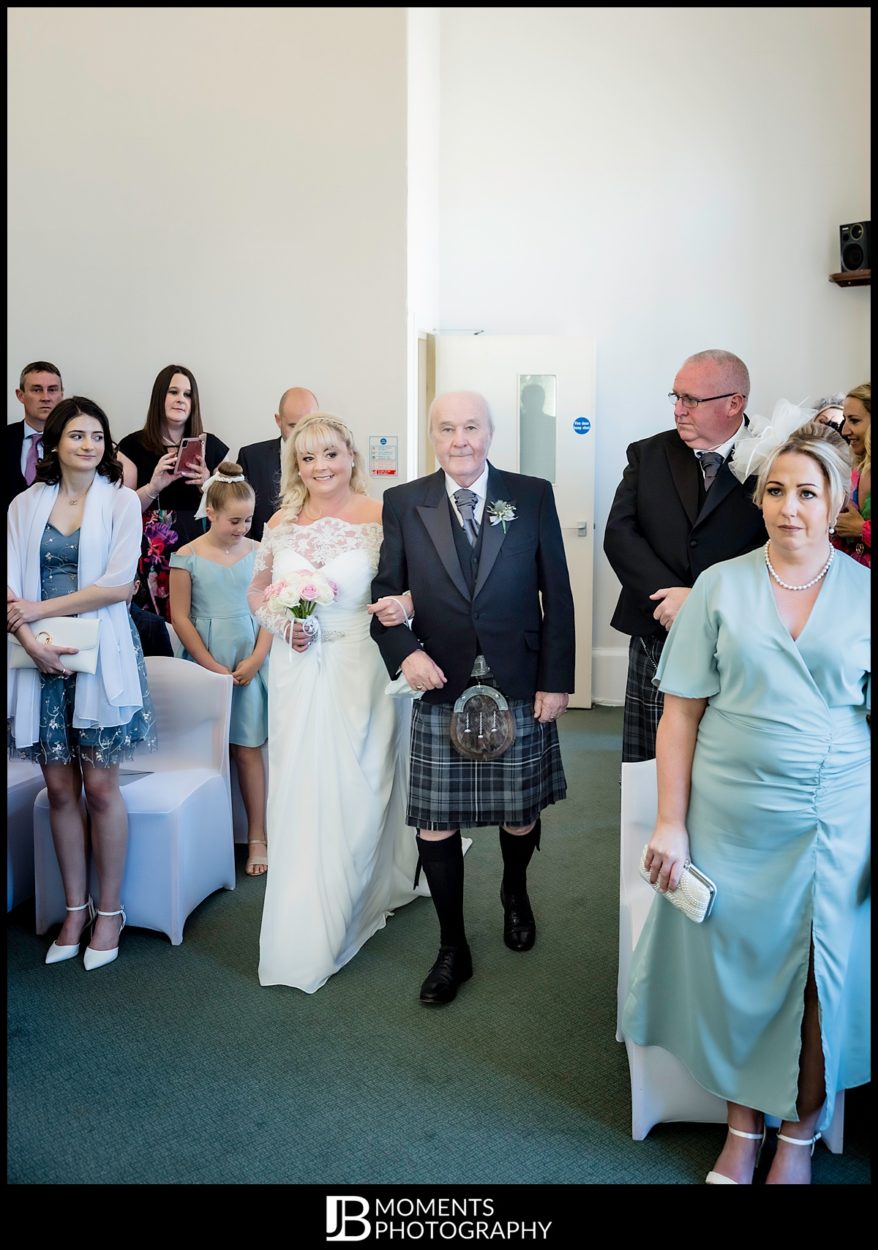 And Janey and Steven…well they were just all smiles for each other. 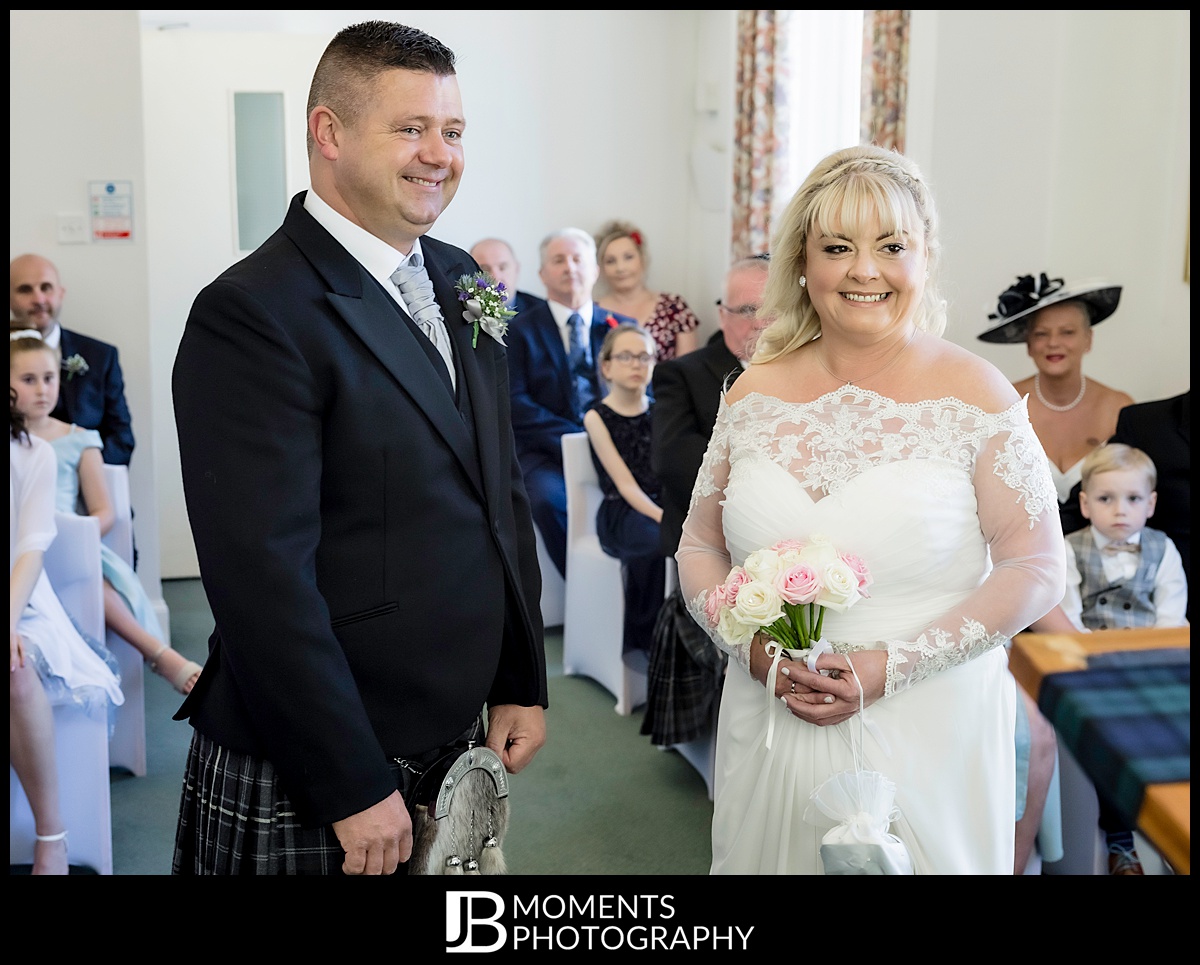 I love this moment right at the end of the wedding ceremony. It gives me all the heart eyes looking at it.

Now as much as nobody wants rain on the wedding day, full bright sun also presents its own problems for your wedding photographer. With no cloud cover, people can be squinting into the sun and end up with really harsh shadows under their eyes.

Not to worry, we were in one of Falkirk’s nicest parks and parks have an abundance of trees! I managed to herd all the guests of the minibusses and under a tree. 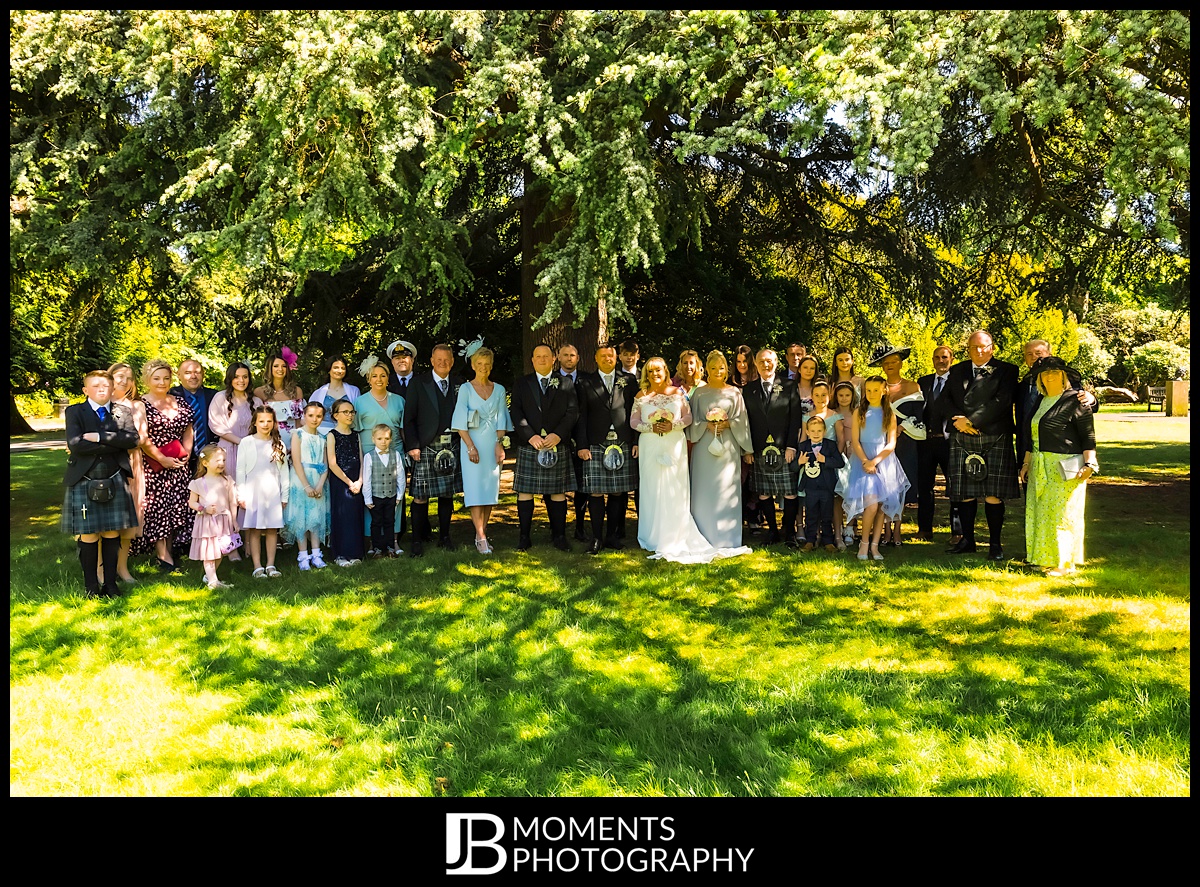 What a well turned out group! They were a very cooperative bunch to organise into the various formal images my couple wanted.

Some of my personal highlights include the bride’s brother in his service uniform. 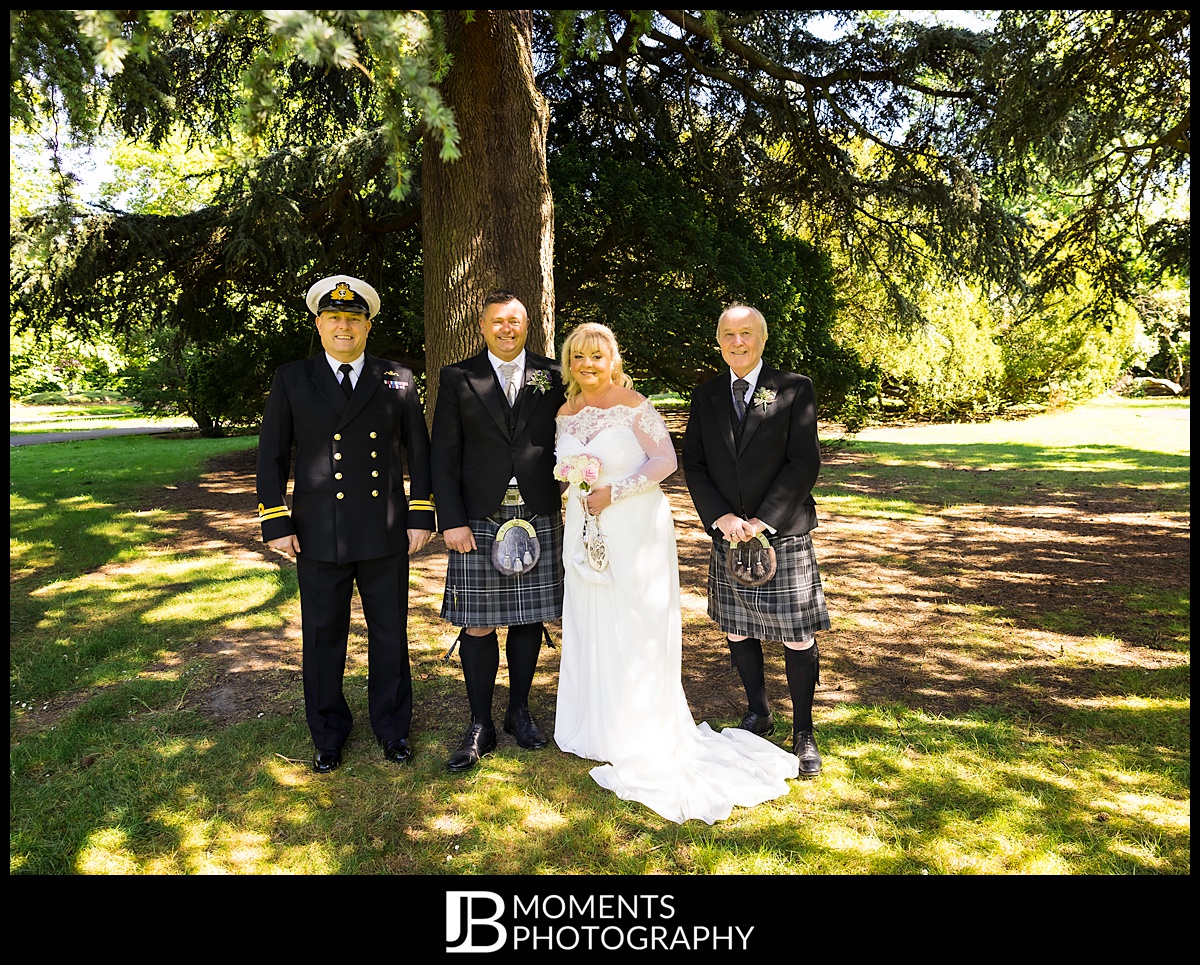 And the groom’s gorgeous 18-year-old twins. 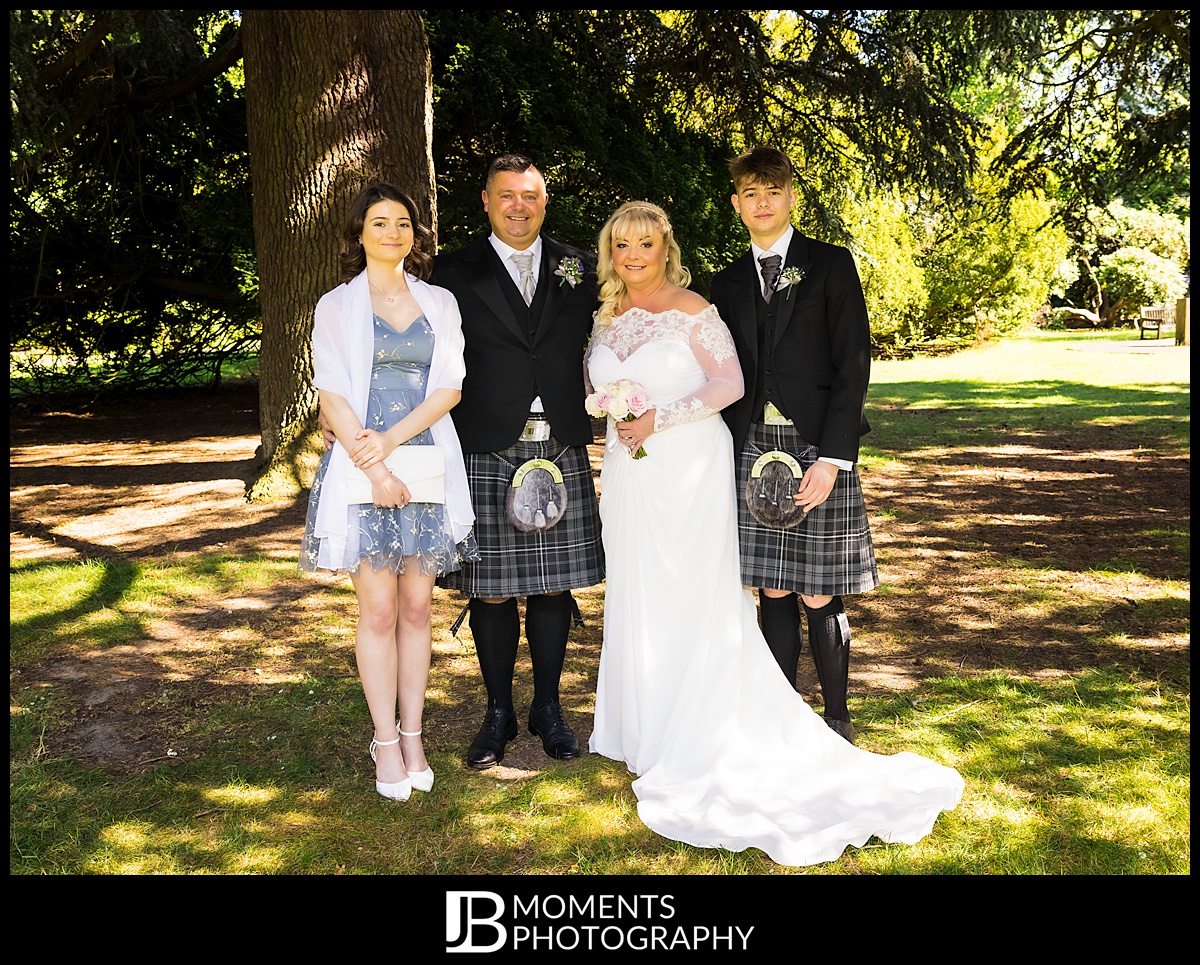 And my new favourite thing… 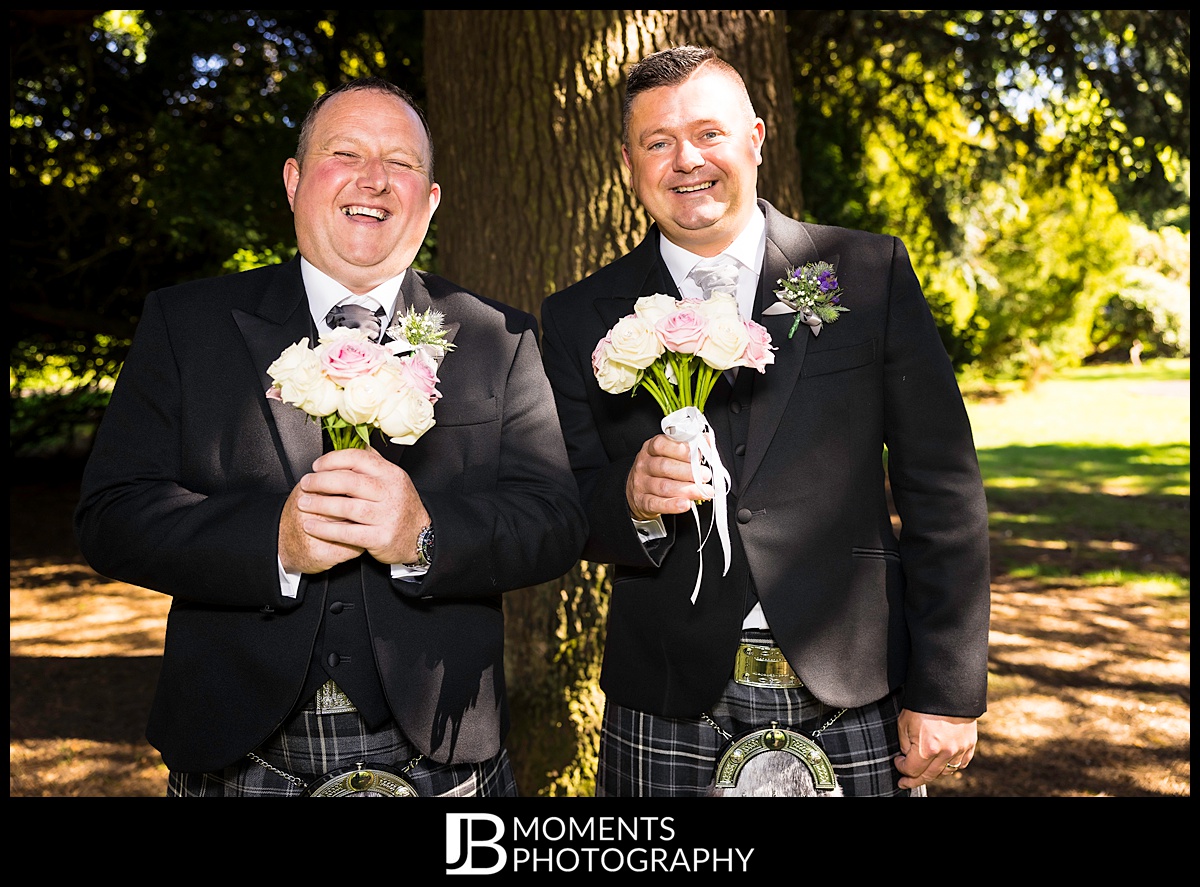 The guys with the wedding bouquets. Don’t ask me to explain it, I can’t!

Just The Two Of You (and me)

Once the rest of the guests were on their way to the wedding reception I was able to wander around the park with my couple to get some images for them. 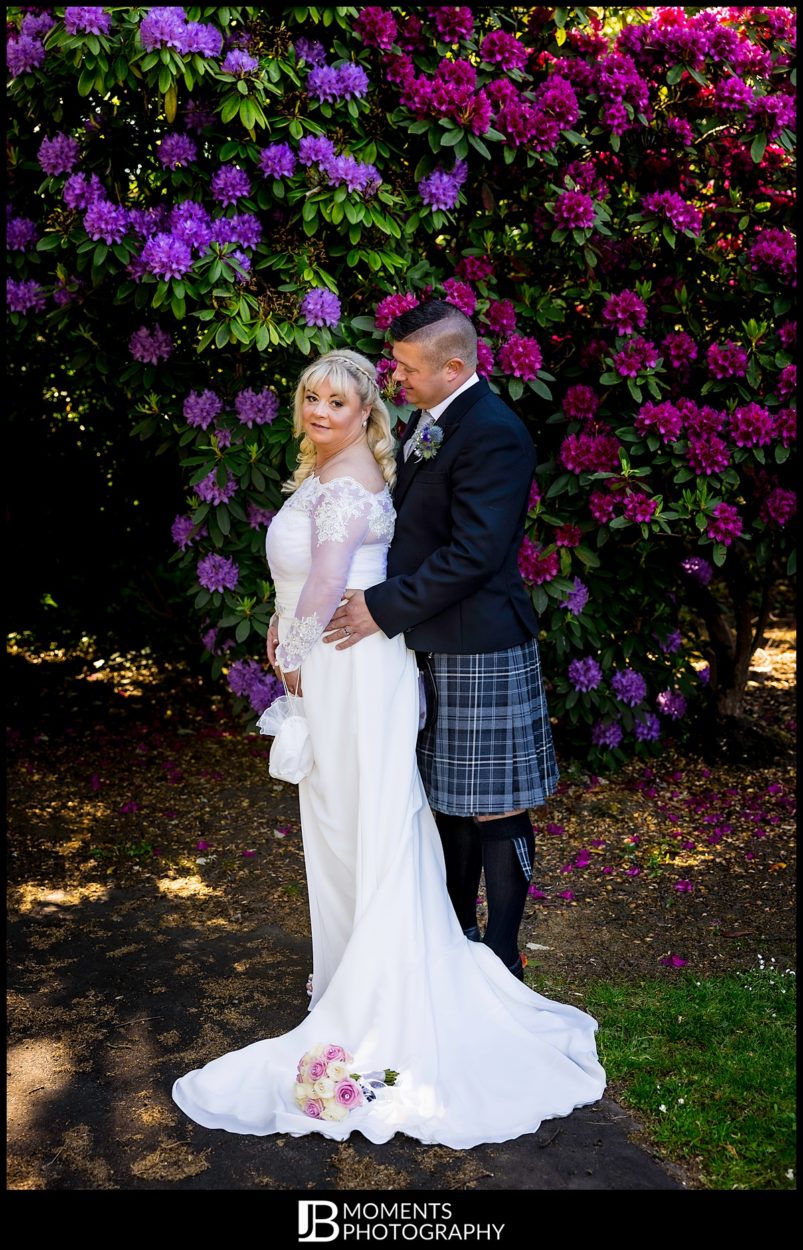 The flowers in the park were putting on a beautiful display and worked as a lovely backdrop for my couple. 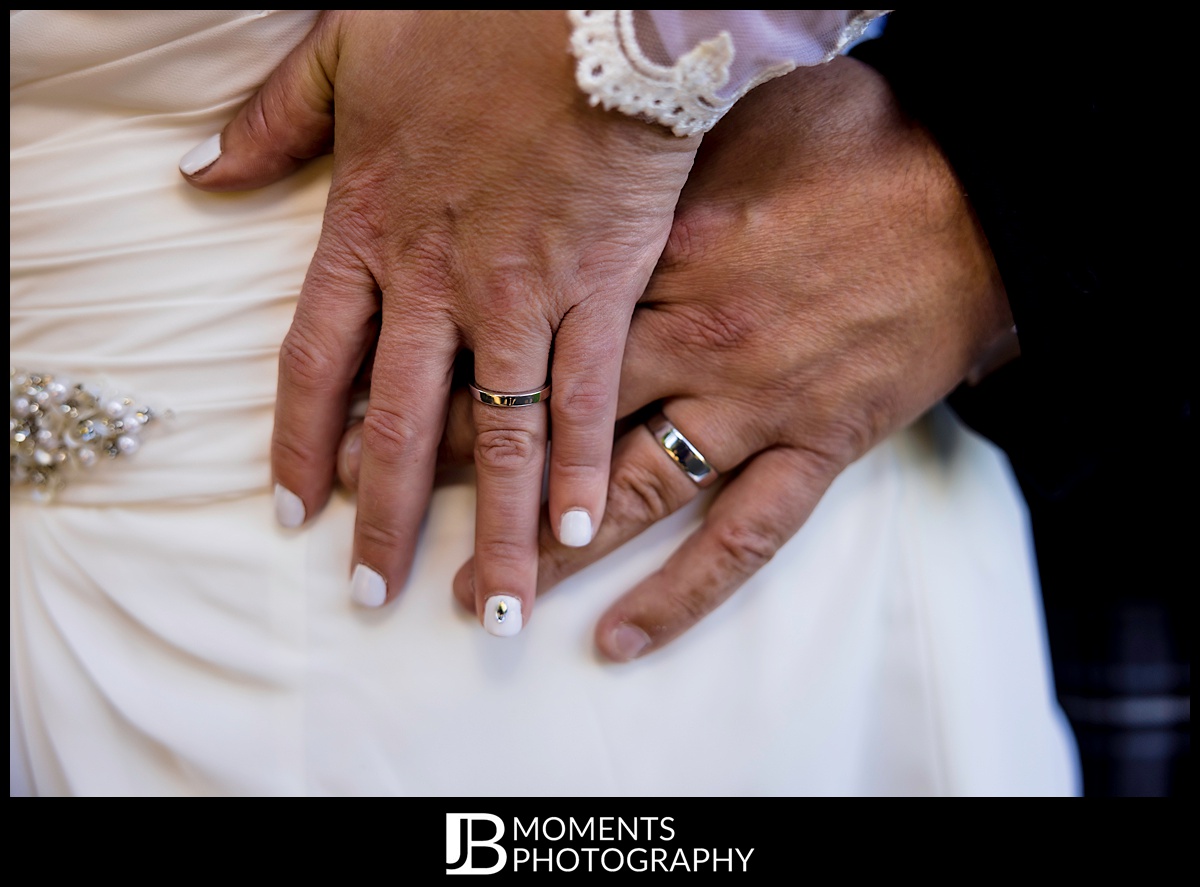 Janey’s wedding ring had been made from her parent’s wedding bands. It was a gorgeous way to keep them close to her so I wanted to document that. 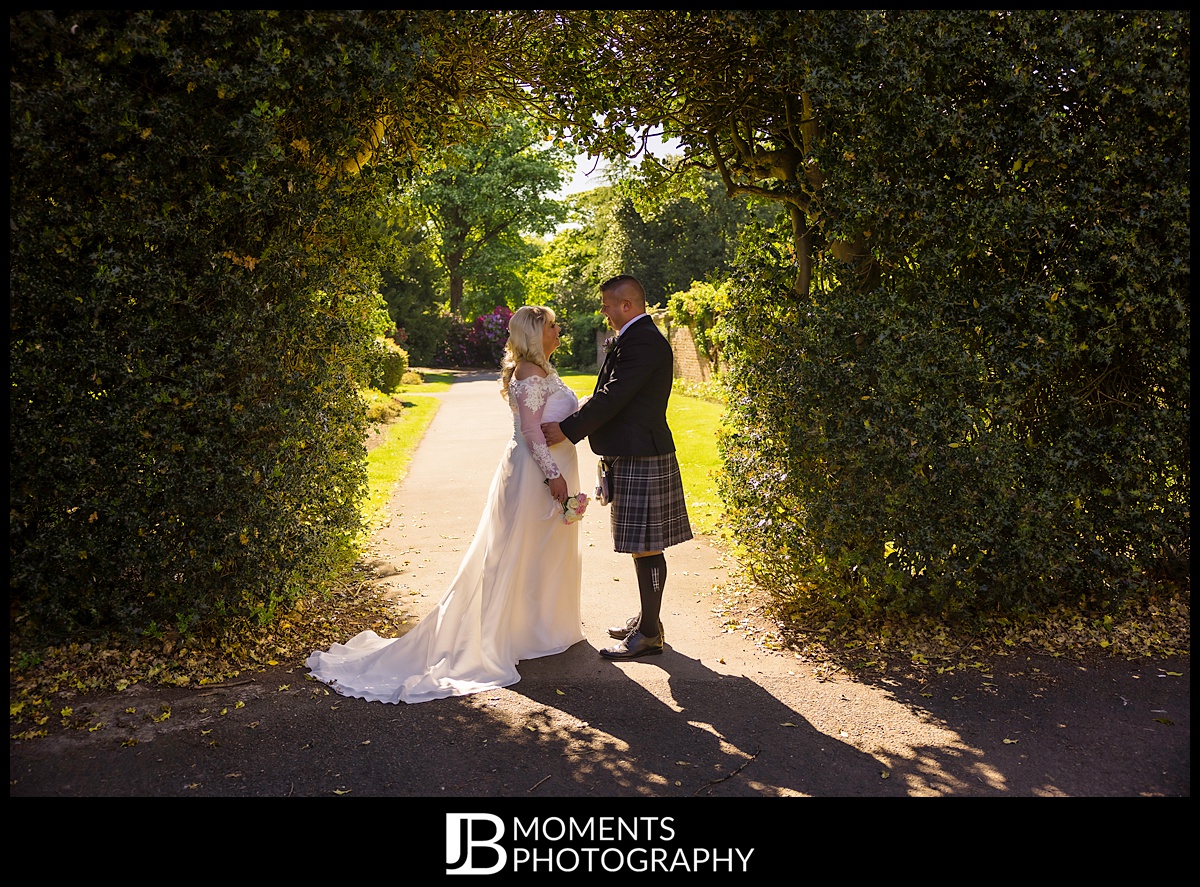 My favourite spot in the park looks nothing when you are there. A hedge cut archway to a path and directly behind me a derelict building. But my camera and I see something altogether more magical. I love this image.

All too soon my time with this lovely couple was up. The sun was still high in the sky and everybody was in need of some more hydration. Plus the new Mr and Mrs had a party to get to. 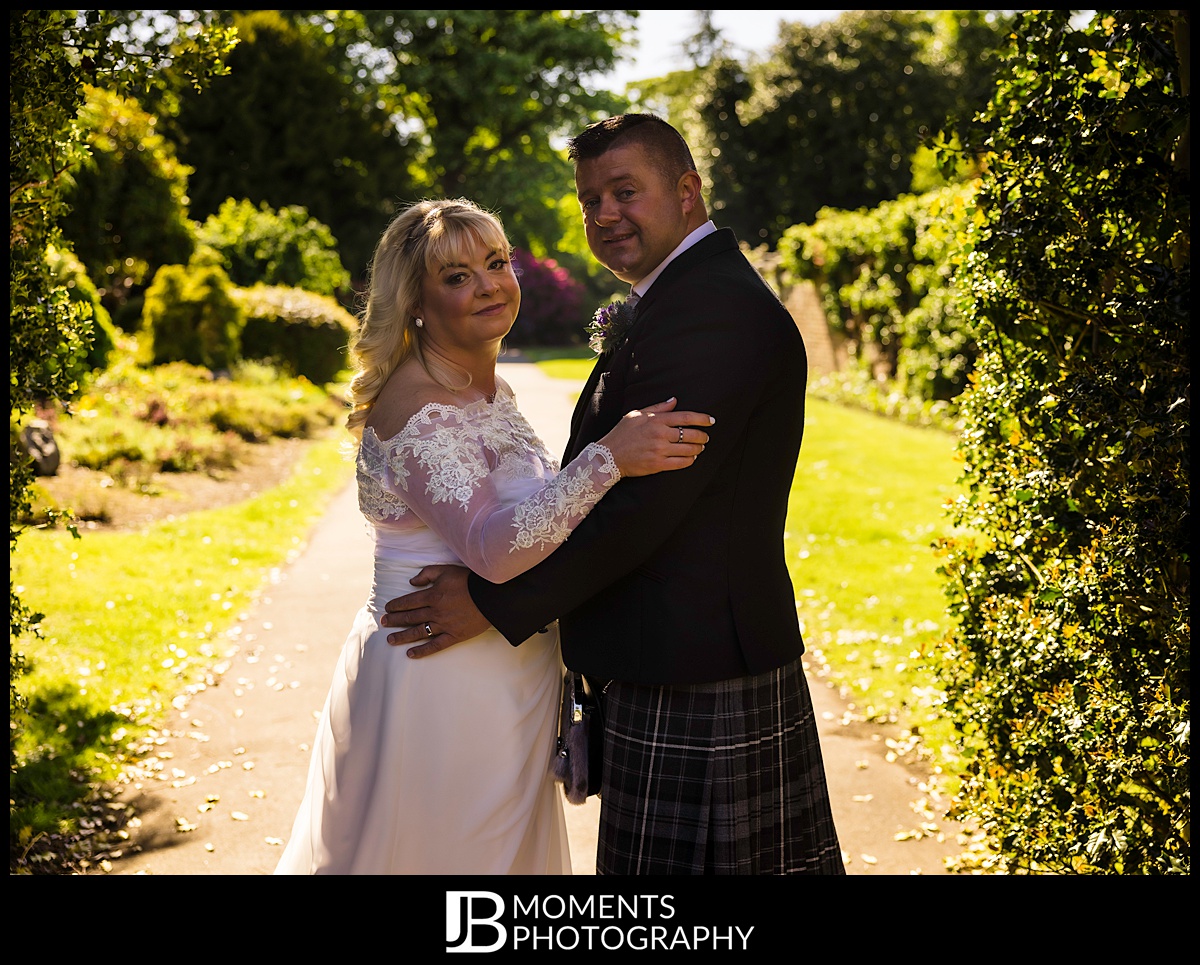