“Haters gonna hate, but here are the only words you need for them. Sashay, away.” – RuPaul, Drag Race

Anyone who knows me knows that I bang on with annoying regularity about how much I fricken love my job! But it’s true because no two days are the same and a lot of the people I meet start out as clients and end up as friends.

So, on the 1st of November, I find myself cooing with baby Alex in the studio in the morning. And meeting up with one of my fave wedding couples Neil and Raymond in the afternoon to capture their very own drag transformation!

I noticed Neil had posted on Facebook looking for a good makeup artist as Raymond had finally convinced him to go out one night in full drag. I happen to know THE best makeup artist Carla Haley. She does all the makeup for my Boudoir Sessions and is a regular makeup artist for TV and film. Neil messaged me to say they had gone with my recommendation and how amazing Carla was and we chatted back and forth about the planned drag transformation. It sounded FABULOUS!!

I thought you were never going to ask!!

Finally, Neil asked me if I would be free to capture their transformation. Urm, hell yes I would! I mean, I’d only been keeping that afternoon free, just in case…

If you are going to do it, do it right

These guys don’t do anything by half. The amount of planning and prep that had gone into this night was incredible. I wanted to capture them before they started getting ready so I could show a proper before and after. 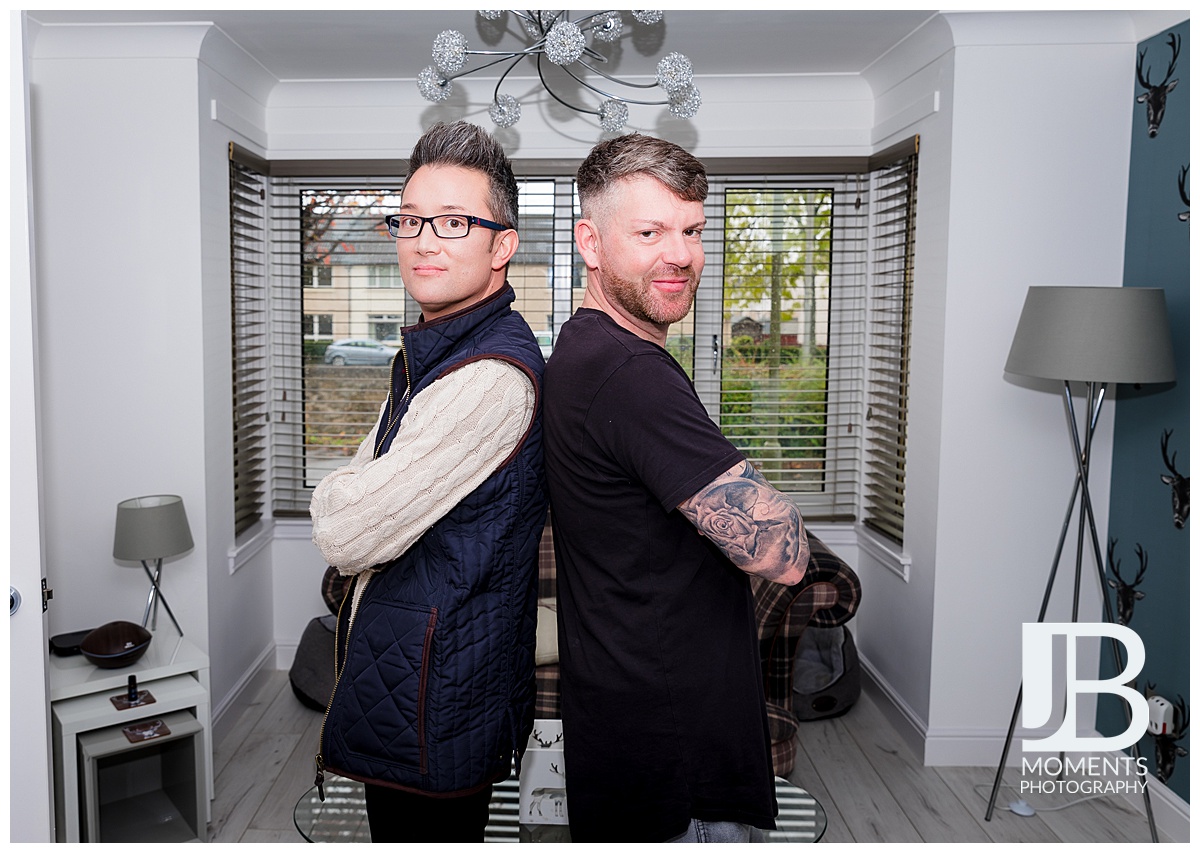 This was at 1 o’clock in the afternoon. It was going to take them another 8 hours along with their friend, Ashleigh to transform into their alter egos (whose names I can’t share on here as this is a family-friendly blog!!). The level of dedication was mind-blowing!

It was great to see Carla again and as she set up her tools, the guys had the same amount of makeup again!!

The best part about a night out clubbing is always the getting ready with your girlfriends part. And that’s what this felt like. 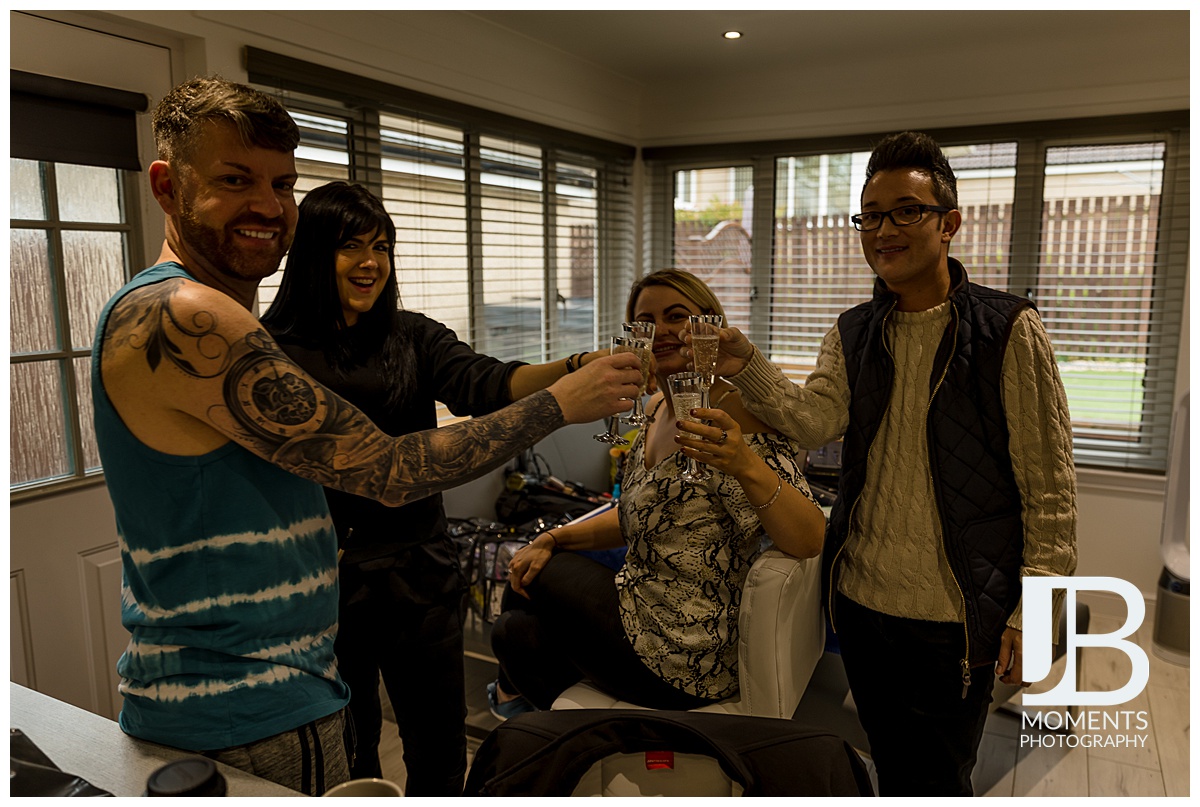 Once Ashleigh was in the make-up chair I left for a while to come back later on. As I left Raymond was glueing his eyebrows out the way. Yes, you read that correctly. Men’s eyebrows are lower than women’s so they are glued up and covered with foundation so that new ones can be painted on higher up the face. The things you learn!

What a difference a few hours makes

I arrived back to find Raymond and Ashleigh fully made up and Neil just about to get in the chair having ‘glittered’ his beard. 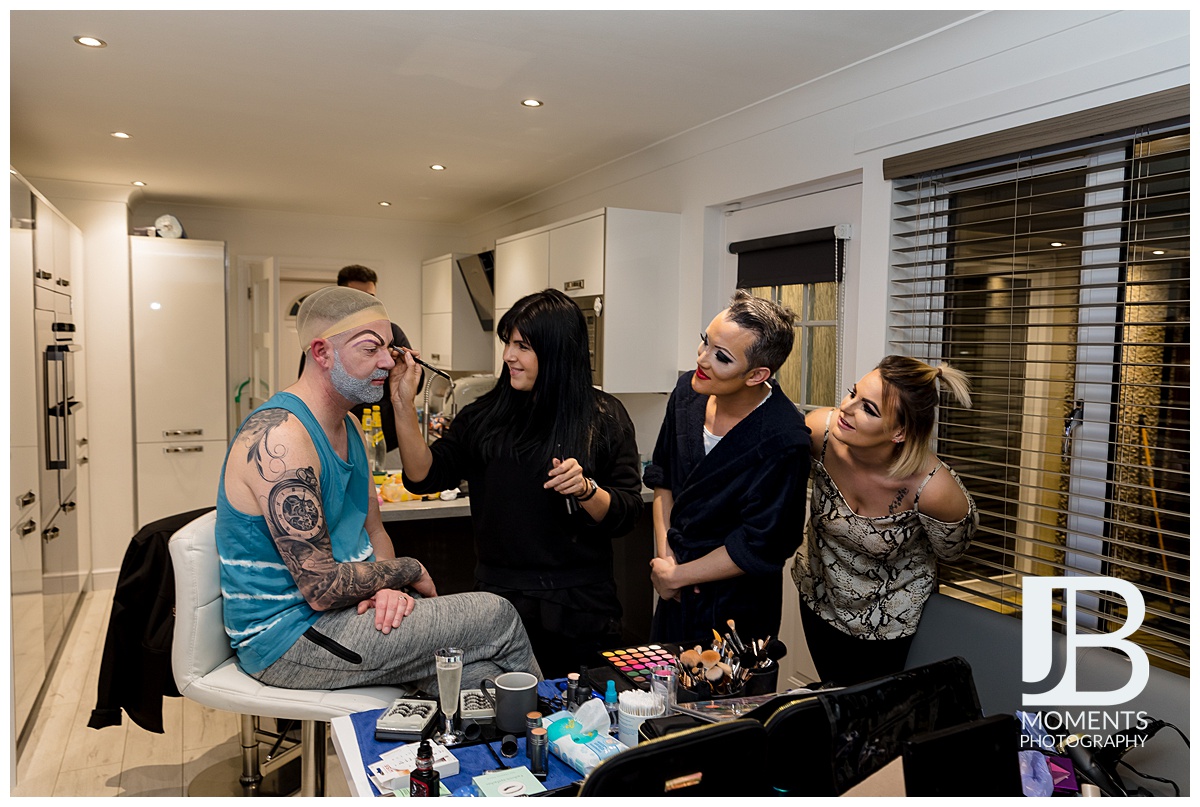 I love this picture of everybody watching over Carla’s shoulder as she works her magic.

It was wig time and the transformation was almost complete.

Raymond had gone for quite a demure outfit and looked beautiful. A lot like his gorgeous sister actually! It’s amazing how his mannerisms became more feminine as he slipped into character. 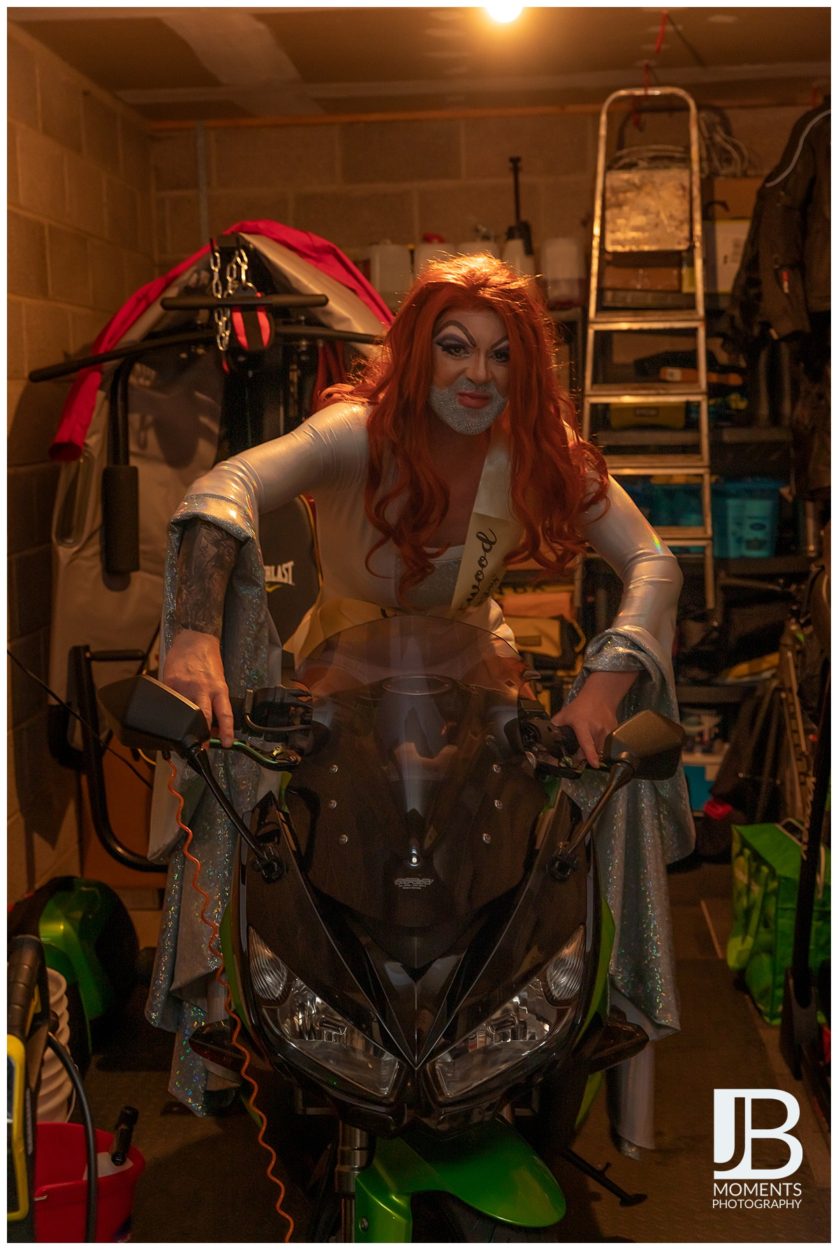 Neil, on the other hand, had gone all out drag queen and was totally rocking it. With a long red wig and thigh-high kinky boots, he looked amazing. Neil is a petrol head and I knew he had a motorbike in his garage. To my amazement, he managed to get on it for me for a picture. I might enter it into this years Pirelli calendar! Watch this space!

I said attention to detail. They even had special bum and thigh pads on to make their figures appear more womanly. Well, I had to capture that! 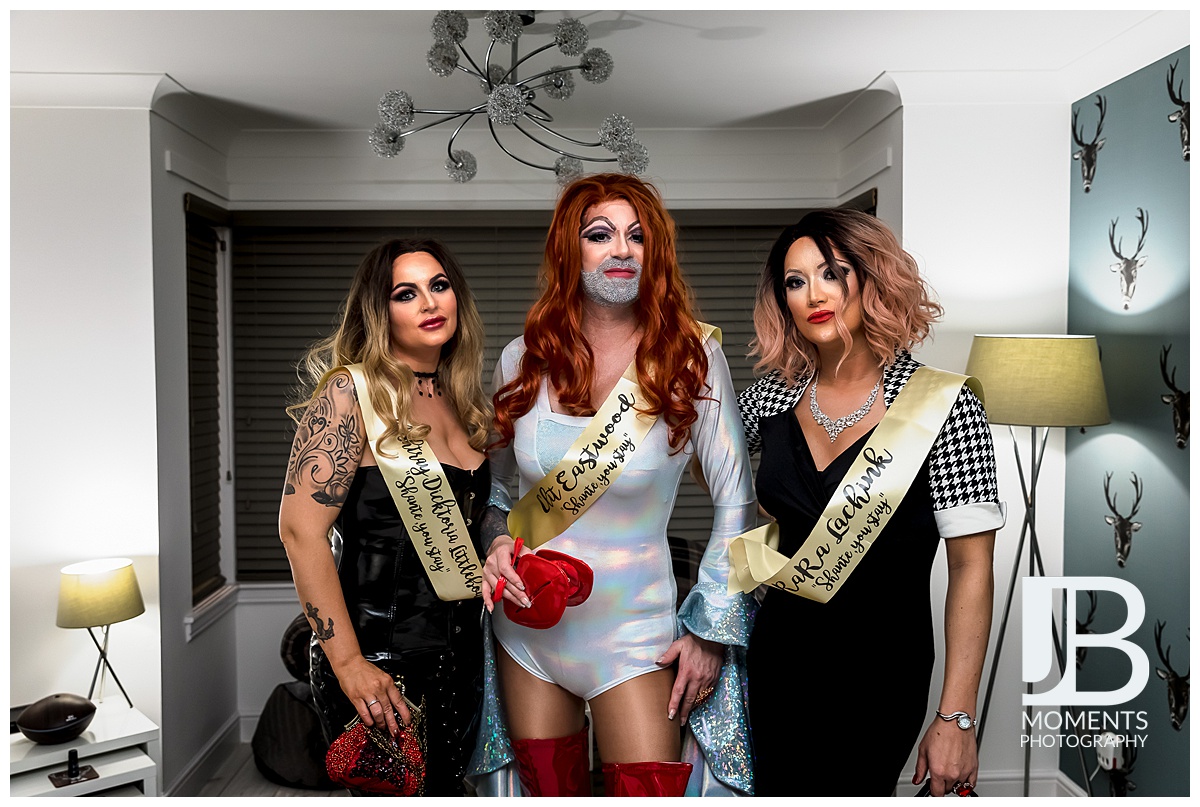 I mean, look at these three hotties. I had great fun teaching Neil and Raymond how to pose like women to ‘pop’ their curves and accentuate their feminine ways.

I think you’ll agree – what an incredible transformation. 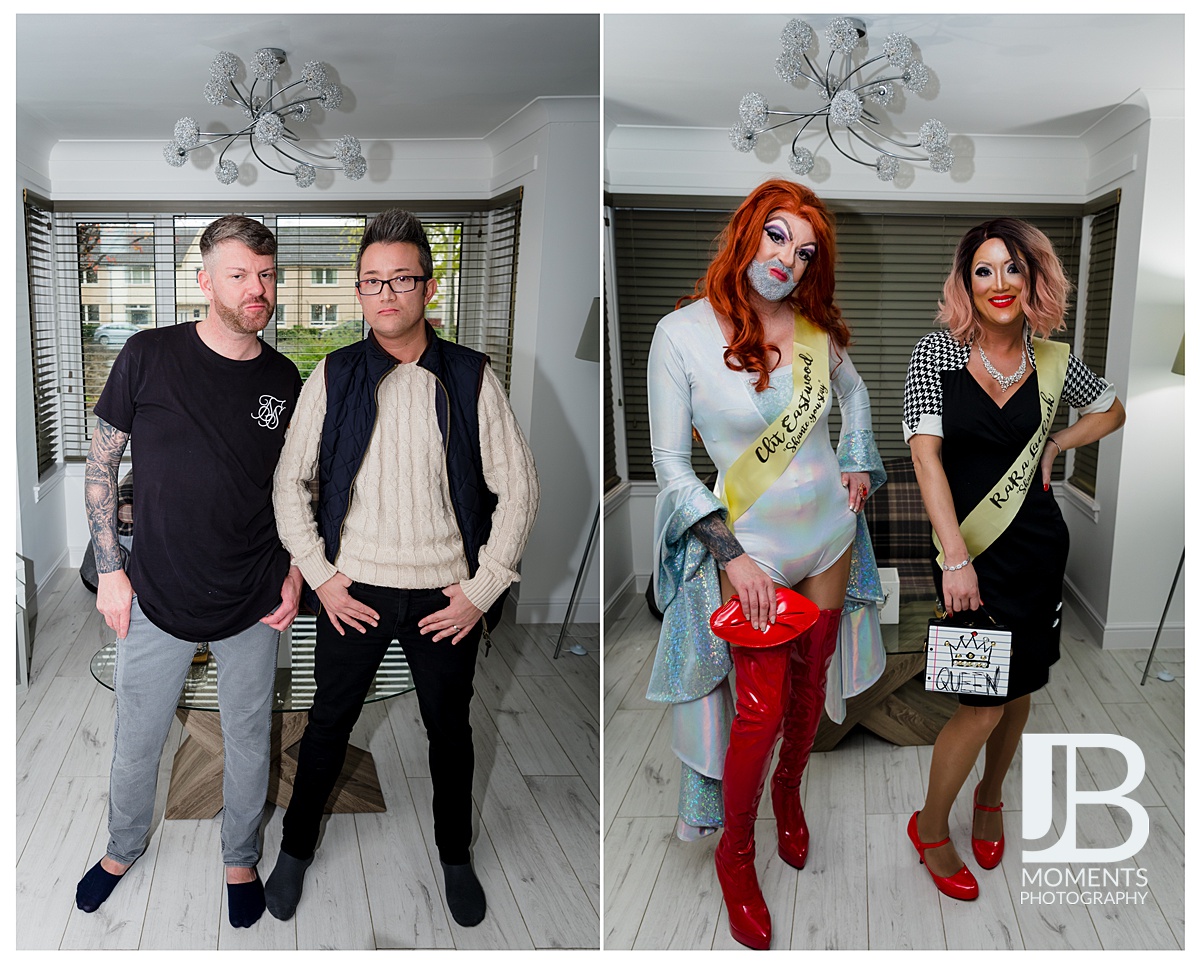 I mean it should be illegal to have this much fun whilst working!!

From the social media feeds, it looks like an amazing night was had by all in Glasgow. Somehow they managed to keep those heels on all night and dance! Although Neil’s blisters the next day looks like he had to have suffered for his art. But beauty comes at a price!