“Where does the family start? It starts with a young man falling in love with a girl – no superior alternative has yet been found.” – Winston Churchill

About three and a half years ago David, an Army recruitment officer, was posted to a job in England. Whilst there he used a well-known dating app and he and Carly had a memorable first date in a local pub. Not long after he was posted somewhere else for a month but they agreed to meet up again when he returned and the rest, as they say, is history!

By the time David got posted back to Scotland, he and Carly were inseparable so they set up house together. Then a few days before Christmas they were getting ready to go out and David surprised Carly by going down on one knee and proposing. 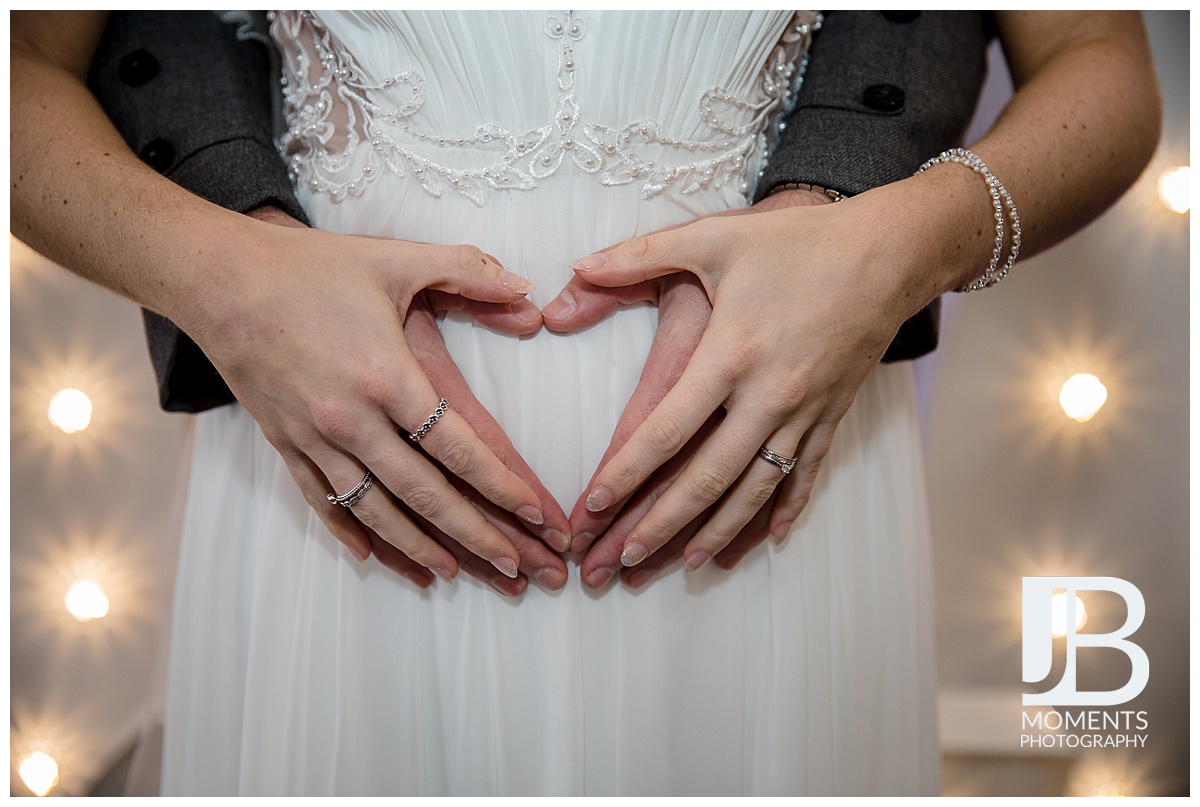 To complete this perfect love story they are expecting their first baby next year. I’m not sure that they could’ve given each other a greater wedding gift.

A trip to the museum

Carly and David chose Low Parks Museum in Hamilton for their ceremony. 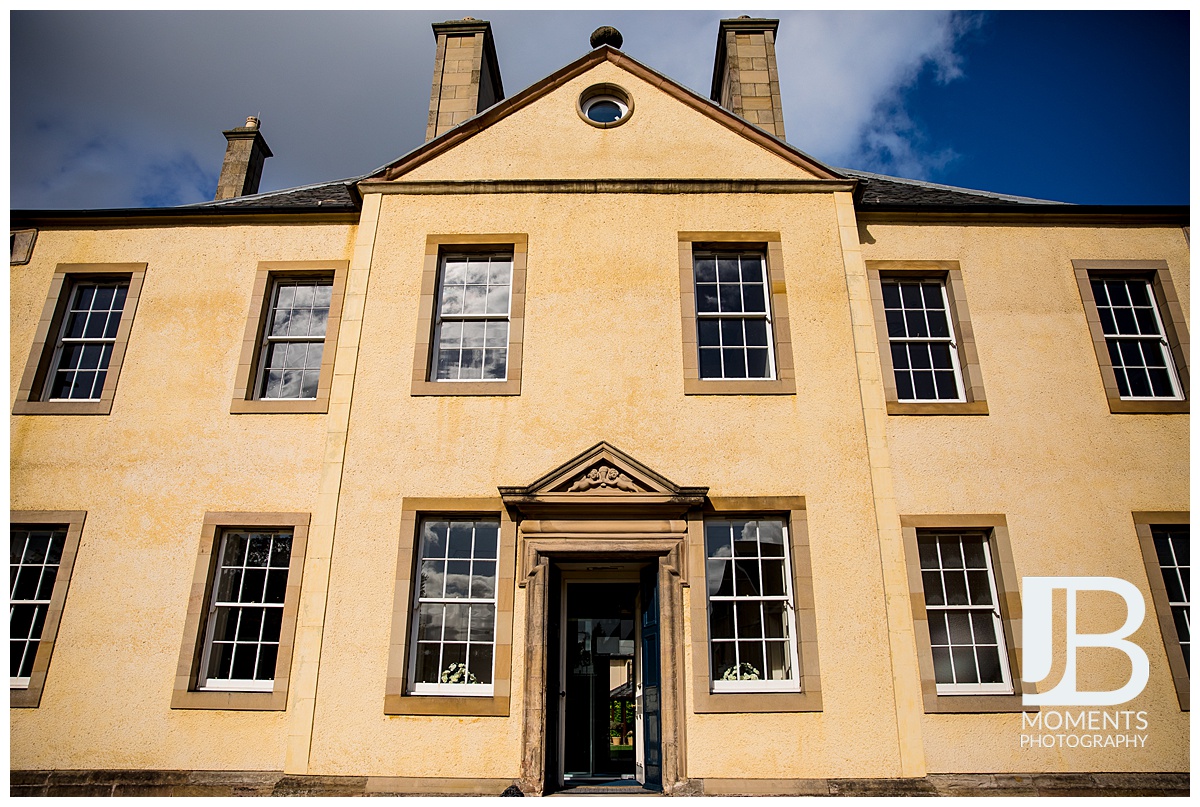 Inside the Assembly Room was a complete hidden gem. Carly and David admitted they only found out about it after they attended another wedding there.

Hip to be a Groom 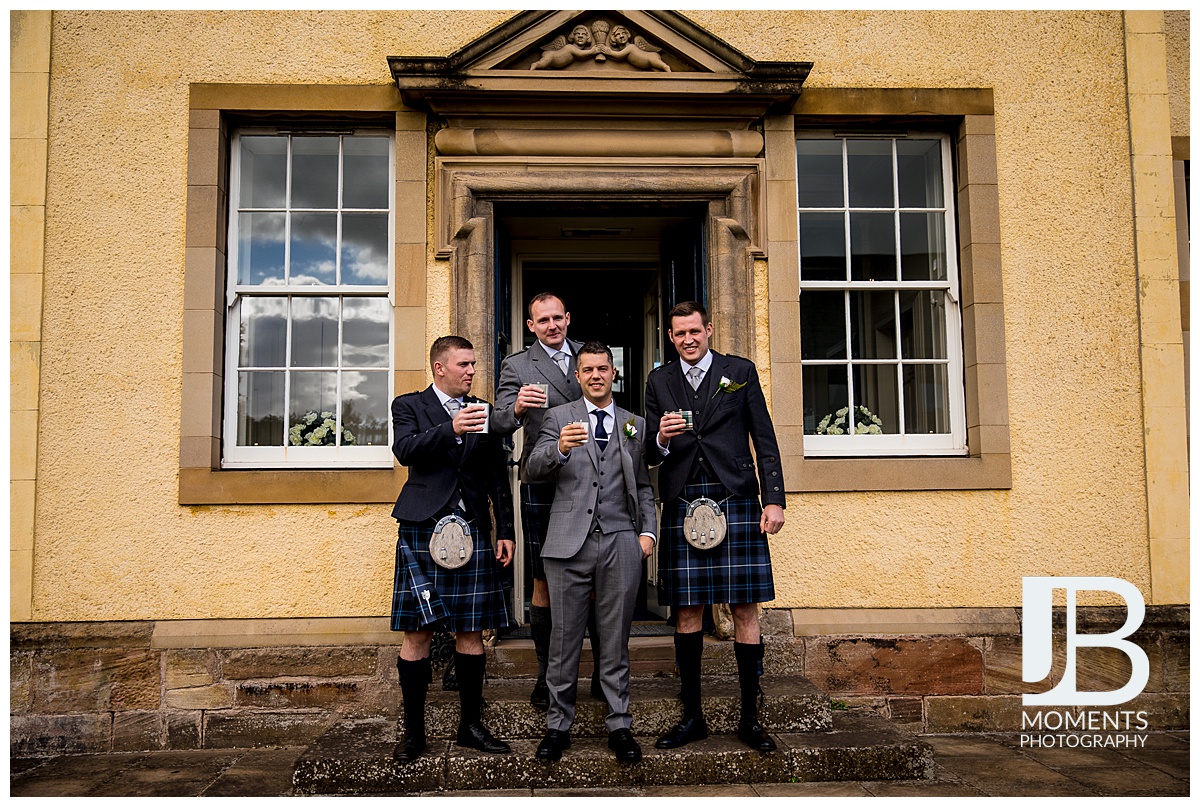 Being a military man David was very good at taking orders. So every time I asked him and his best men to take a swig from their hipflasks for a photo he obliged 😉

After a week of gales and rain, storm Ali had abated and the sun was shining. So much so that it was hard to get all the guests inside before the bride arrived. All wanting that last little bit of vitamin D!

Eventually, the venue staff and the best men got them all seated and the piper, the registrar and I waited for the bride to arrive with her super proud dad. 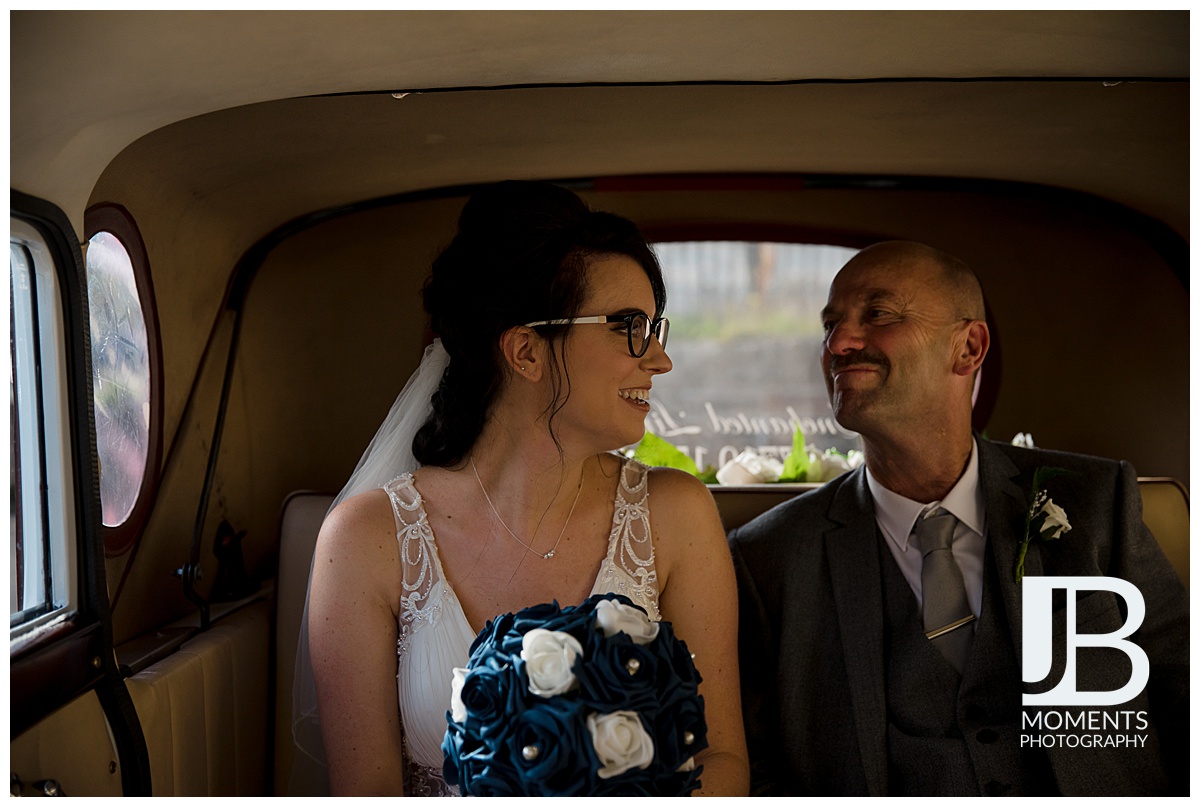 Carly looked beautiful, she was absolutely glowing and couldn’t stop smiling as she headed down the aisle to her Dave. 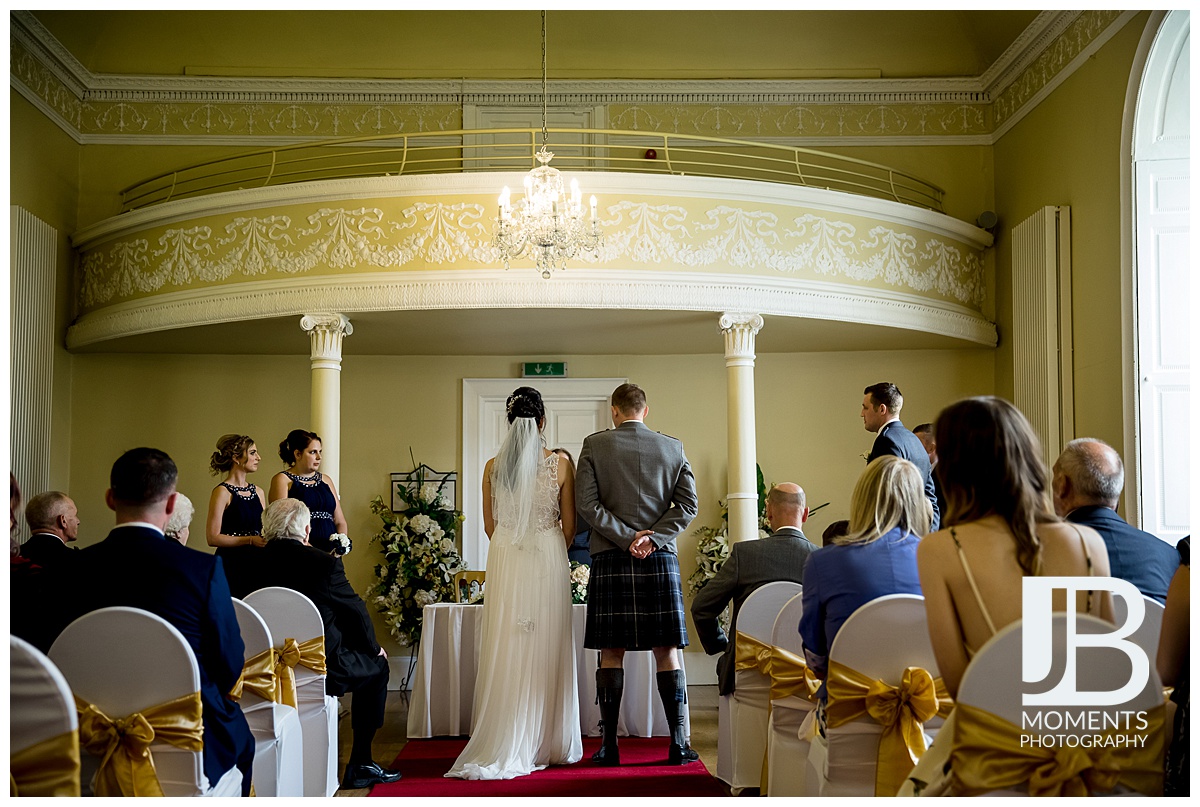 Carly and David’s vows rang out loud and clear and then, just like that, they were husband and wife.

Best of all for me I then had a captive group before the coach picked up all the wedding party and took them to the reception venue. Greatest scenario EVER for a wedding photographer as all too often getting group shots of the whole party is like herding cats once they discover the bar! 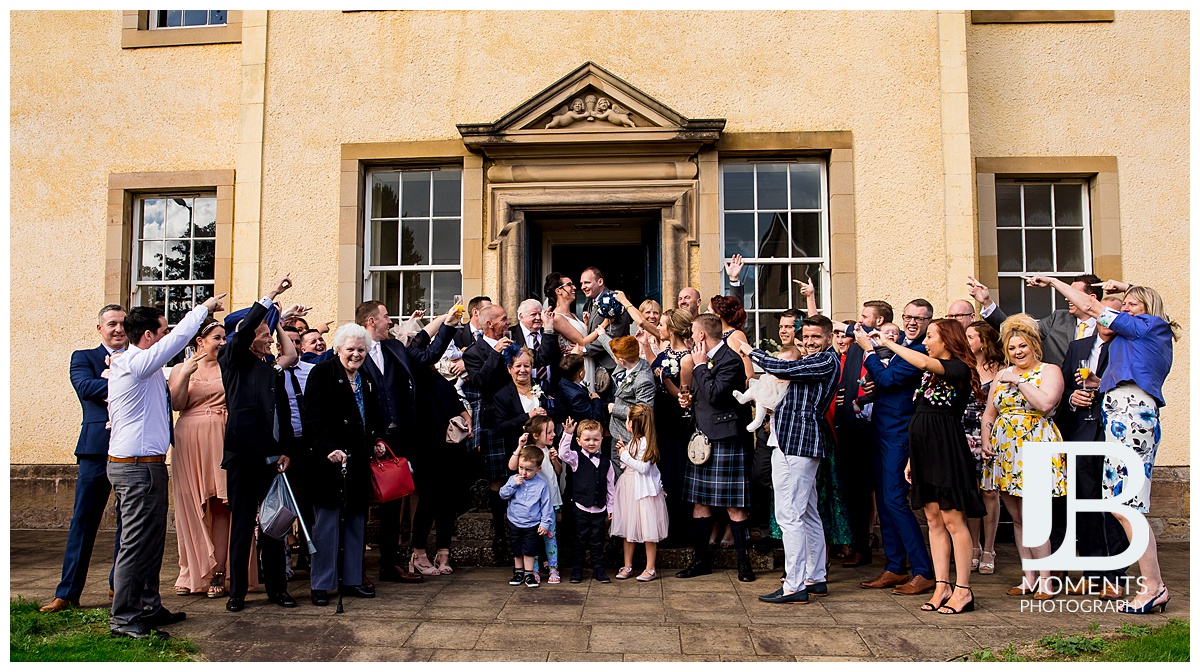 Whilst the rest of the guests travelled to the reception in a luxury coach the bride and groom had this beautiful machine from Enchanted Limousines. 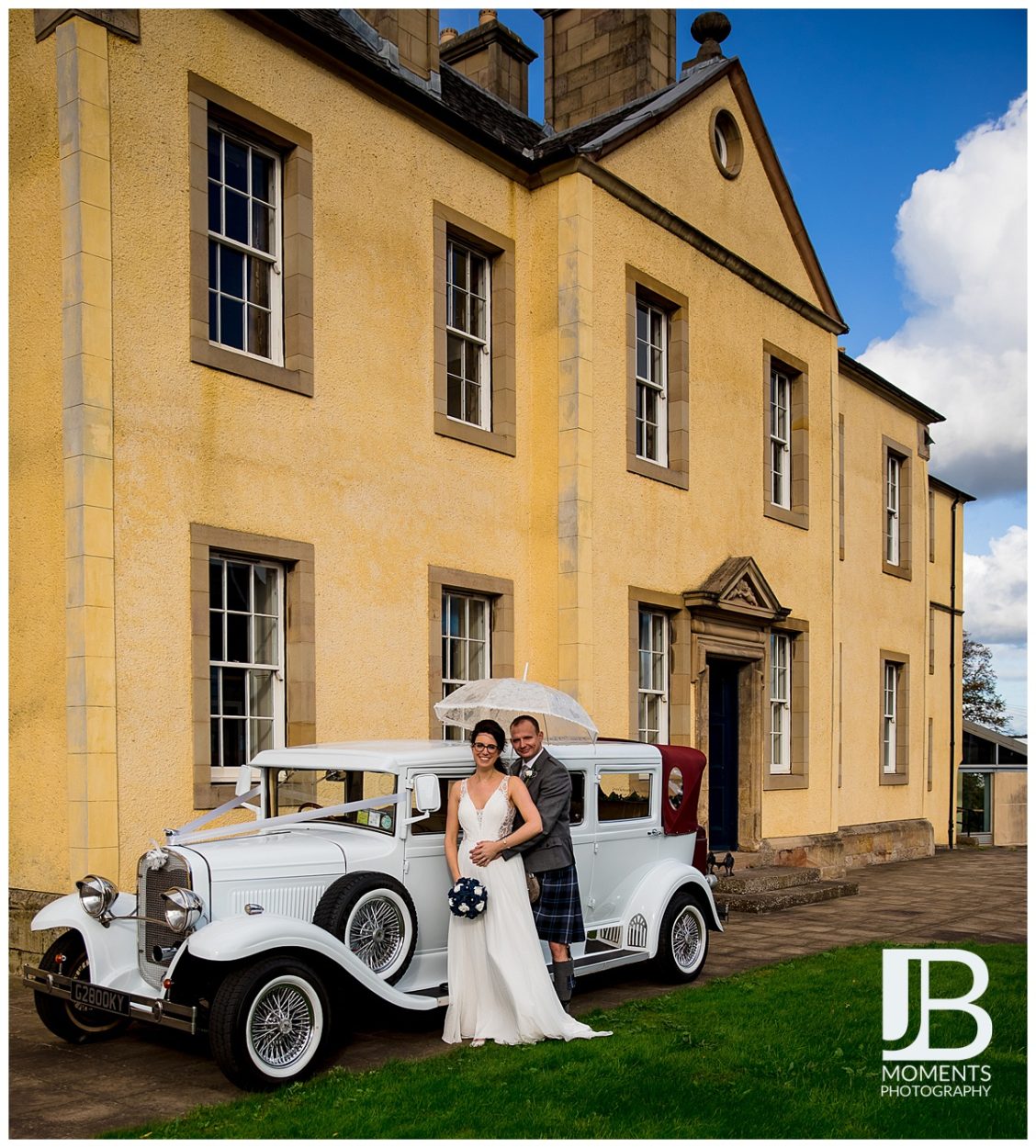 People that know me well know that I can be a tad inappropriate at times. But never at a clients wedding. I try my utmost to be as professional as possible. This time it wasn’t even my fault (honest guv). At the AlonA Hotel in Motherwell Carly and David had hired the LED lights of their initials. All was going well with the formal photos until I innocently asked someone to put their hands on the D (for David!!) and people started sniggering…Once I realised my faux pas everything I said sounded unintentionally smutty! 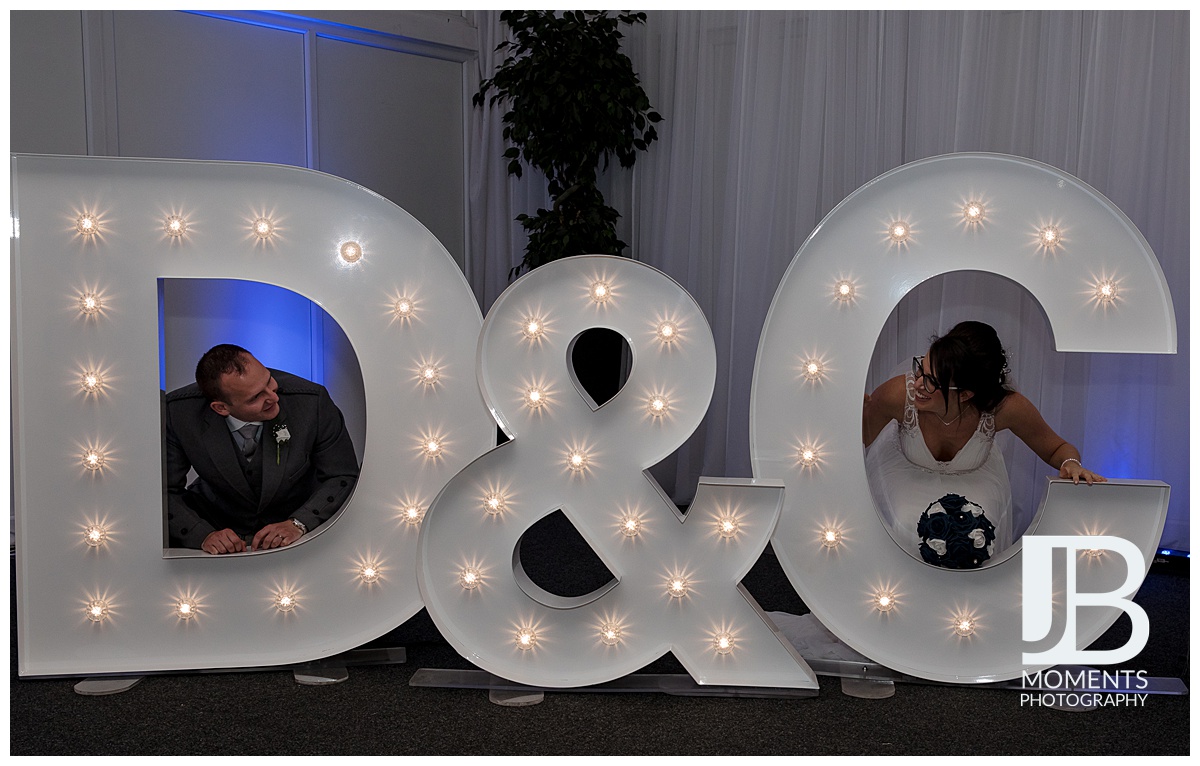 Soon it was time for the meal and speeches and it was David’s best men that stole the show. His childhood friend went first and shared a story about a parachuting hamster that nobody could quite believe. 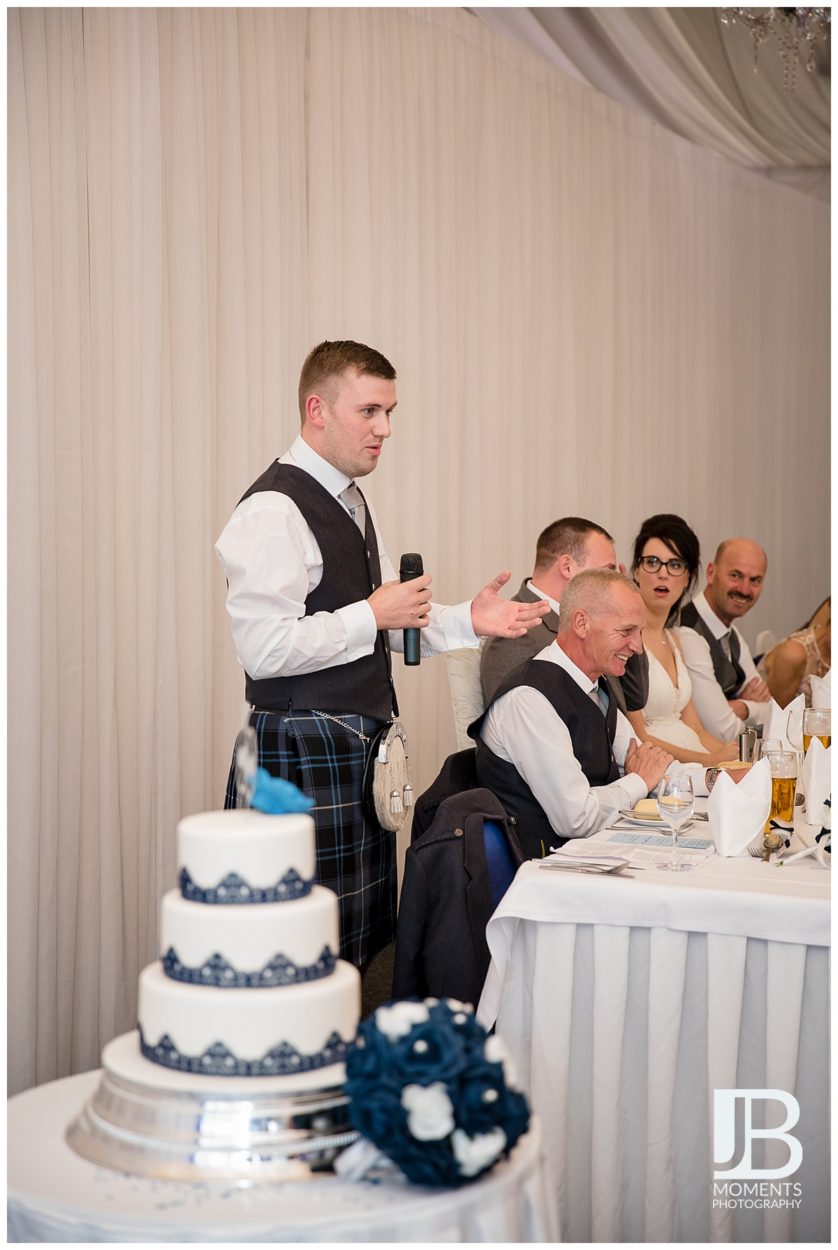 Judging by the bride’s face she’d never heard this story either!!

The other best man hinted to even more scandalous stories but as the audience contained kids and grandparents he couldn’t share any of them. He did, however, angle for some of Carly’s mum’s legendary lasagne!

Time to get the party started

As always, once the cake was cut and the first dance danced it was time for me to leave the new Mr & Mrs Hamilton to party the night away with their fantastic family and friends. 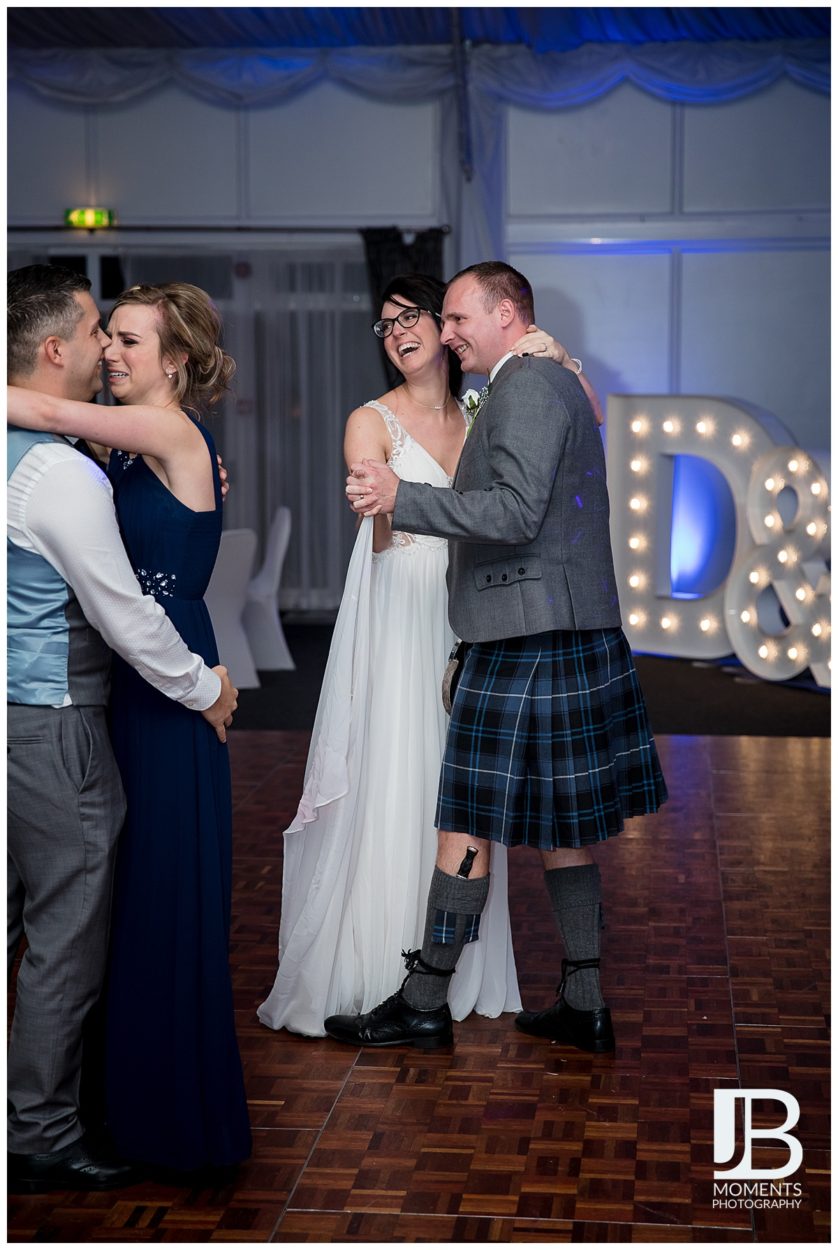 Congratulations to the most gorgeous pair and I look forward to shooting baby Hamilton when he or she arrives.