Motorsport on his mind

For as long as I can remember my husband, Mr JB has been on a mission to combine my love of photography with his love of motorsport. And for as long as I can remember I have resisted. I just didn’t think it would be my thing…I like photographing people, especially people in love and little people. Cars going around a track…nah not so much (unless I was getting to photograph Lewis Hamilton, with his top off….what? A girl can dream can’t she?).

Gradually he has been chipping away at my resistance. First with a Car Photography Course at Brooklands Museum as a Christmas gift. Then with some gentle naging. Finally what sealed the deal was getting me a media pass at the 2019 Bo’ness Revival and the promise that I would be paired up with an experienced motorsport photographer to learn how to capture cars at speed.

Born to Lose –  Live to Win

You see Mr JB races his own car in the Hill Climb. His 1978 Corvette Stingray nicknamed Lemmy. I suspect that is why he is so keen for me to capture the events. 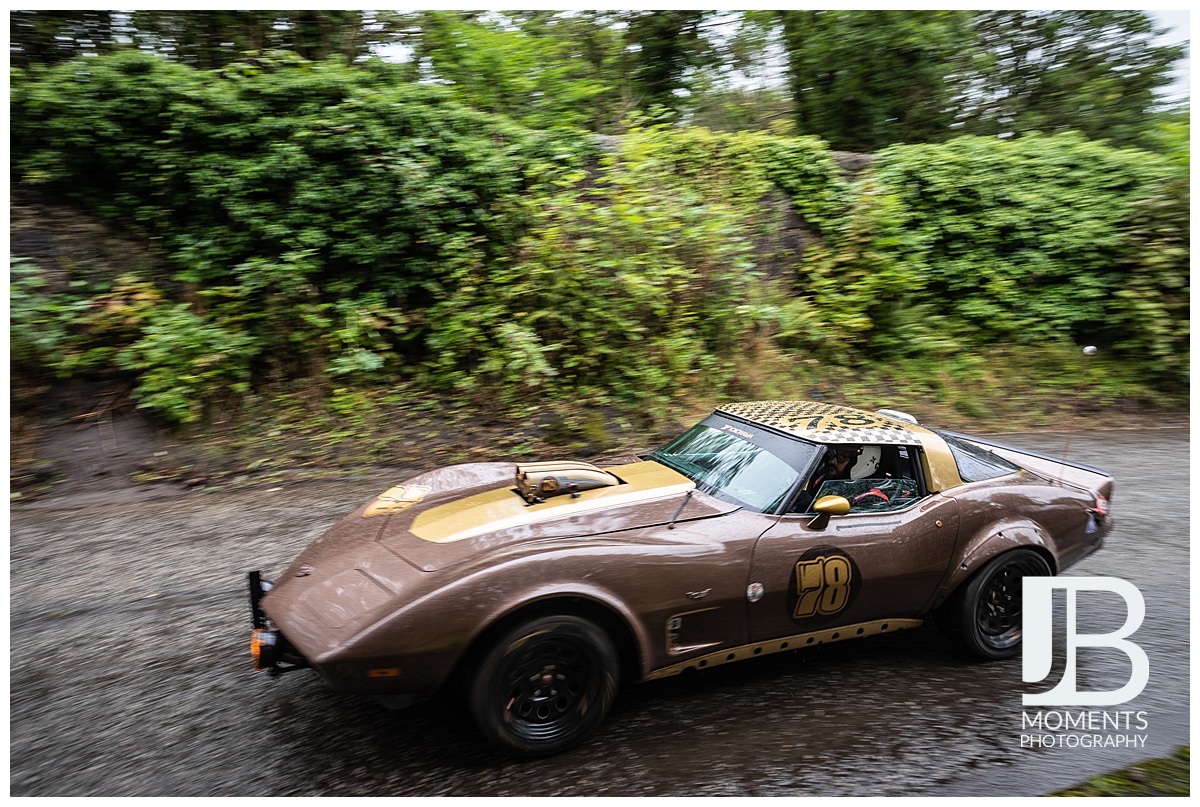 Here he is just starting his first practise run on day 1.

All the gear – any idea?

What is a Hill Climb you might ask? A Hill Climb or Hill Sprint as they are sometimes known are timed drives up a dedicated track. You battle for the fastest time in your class not against each other. So instead of racing it is about the skill and precision of the driver. Bo’ness was established as a hill climb in 1932 and was Scotland’s first dedicated race venue but at some point was closed down. It was revived in 2007 and remains a much loved motorsport event in Scotland ever since.

I arrived with Mr JB early Saturday morning for my media briefing where I got my media pass and tabard allowing me access to areas of the track the spectators couldn’t go. Mr JB went with the other competitors for their driver briefing and the paddock was full of anticipation and excitement. 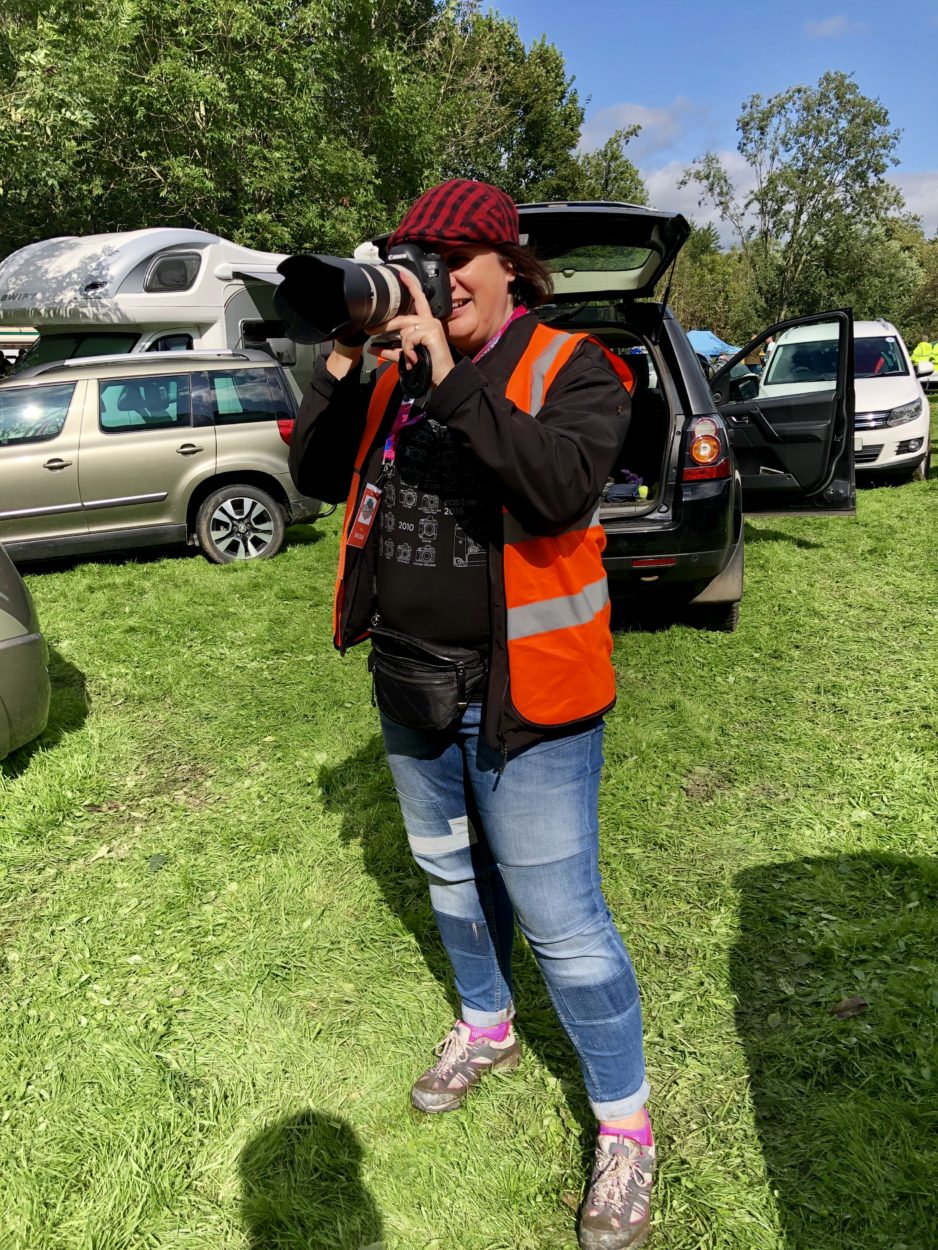 I was paired with the photographer Margaret Lothian who had been photographing at Bo’ness for many years. And we decided to start off in the paddock.

As well as anticipation and excitement in the paddock there was lots and lots of rain and mud. 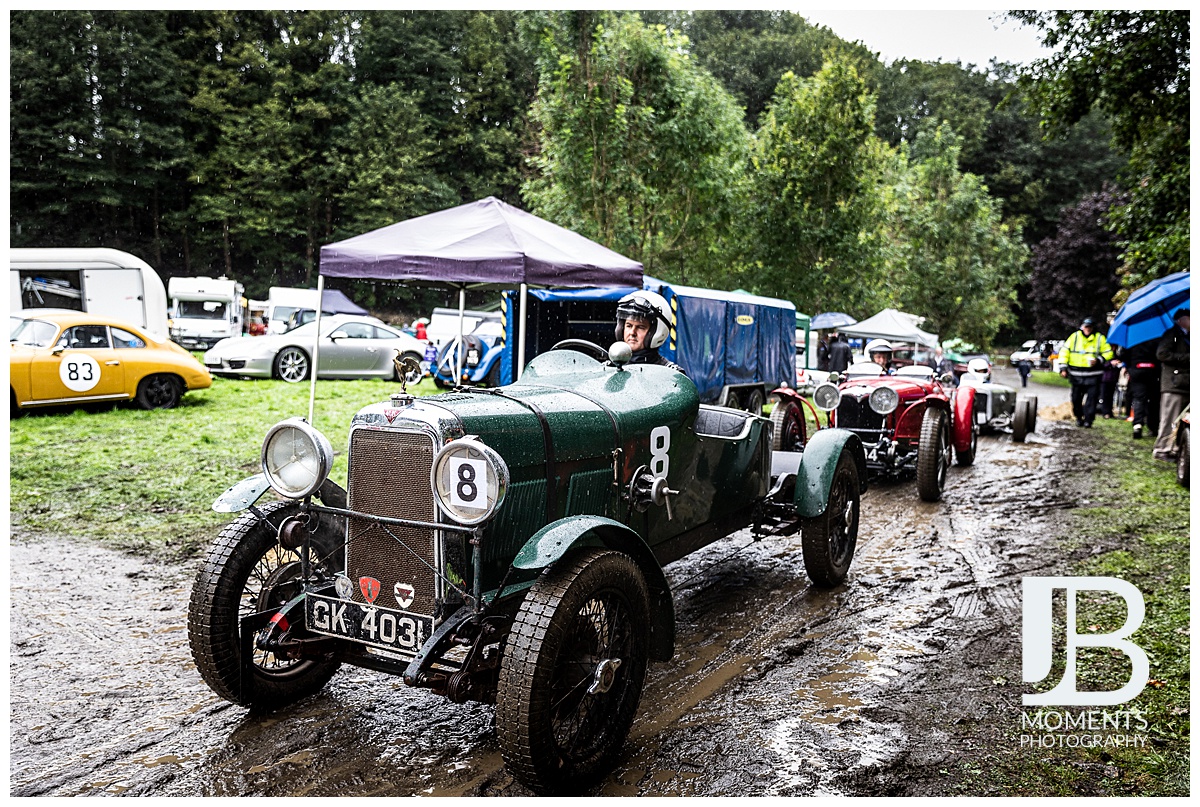 Modern 4x4s were getting stuck in some parts so how these guys got these vintage motors up to the start line I have no idea.

It made for some interesting modifications…

After capturing some of these beautifully restored motors coming off the start line Margaret   was suitably impressed with my panning technique (*puffs chest out in pride*). So we went to another of her favourite spots, the first corner, the dreaded hairpin. 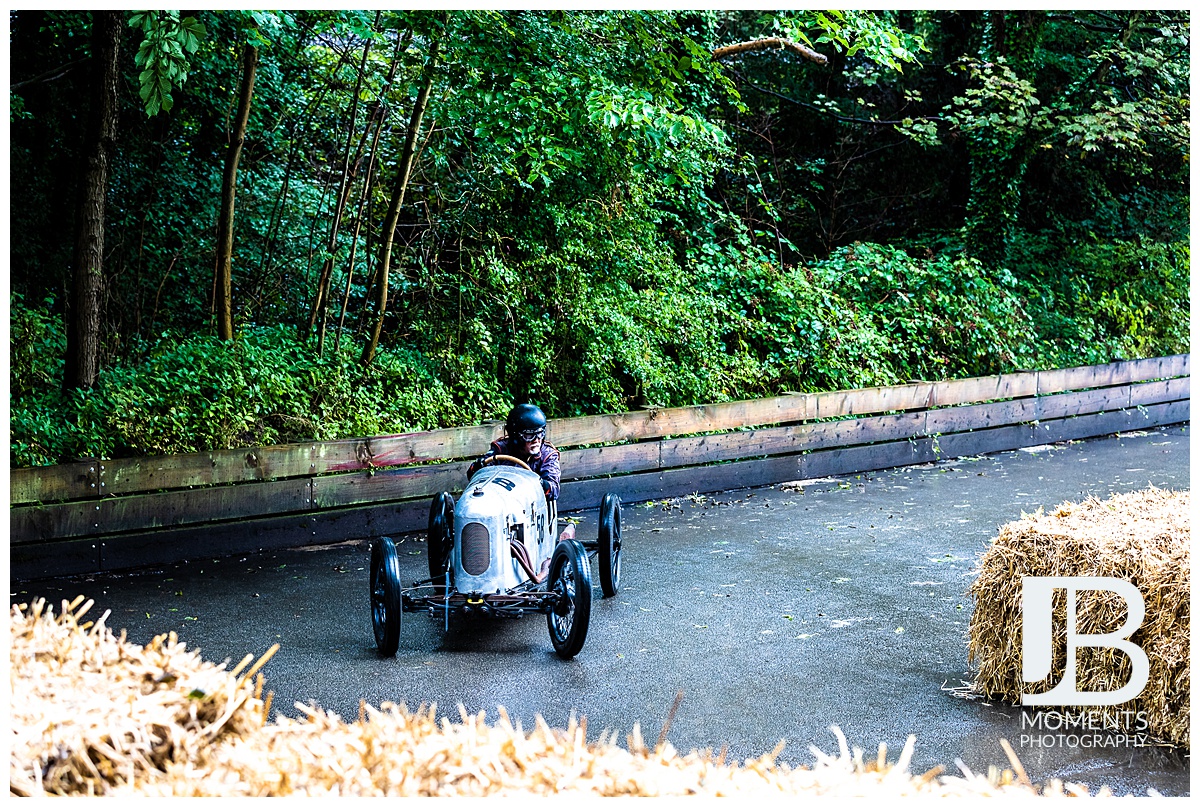 The cars have to almost come to a stop to get around this corner and is a real test for the drivers.

Margaret was ready to move again and this time we went to her favourite spot on the track. 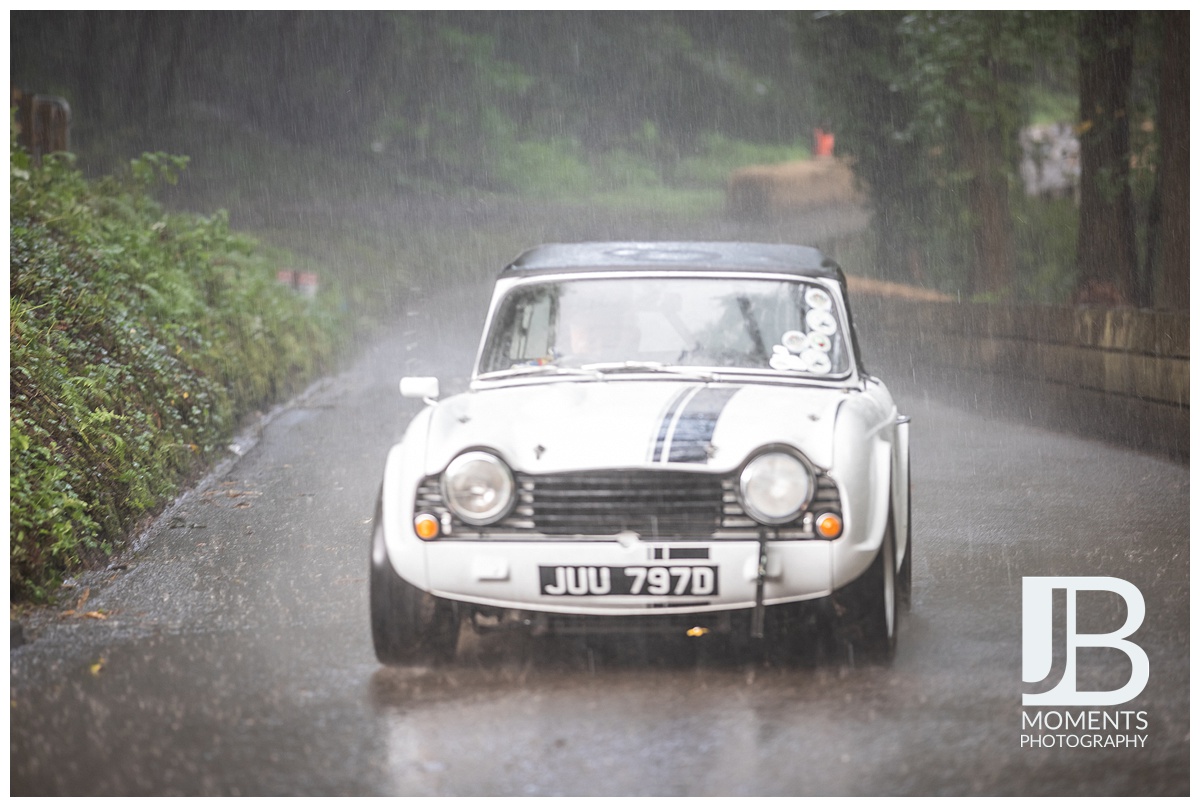 We were stood at the Marshall point half way up the hill and as we got there the heavens opened as you can see from the shot above.

Whilst it made it all the more tricky for the drivers it made for some fantastic images. After a while Margaret and I were joined by another photographer who shoots freelance. His work is often used in national newspapers and the like. So for the three of us to be swapping tips and techniques…I was living my best life (despite getting heavily rained on as the trees offered little cover). 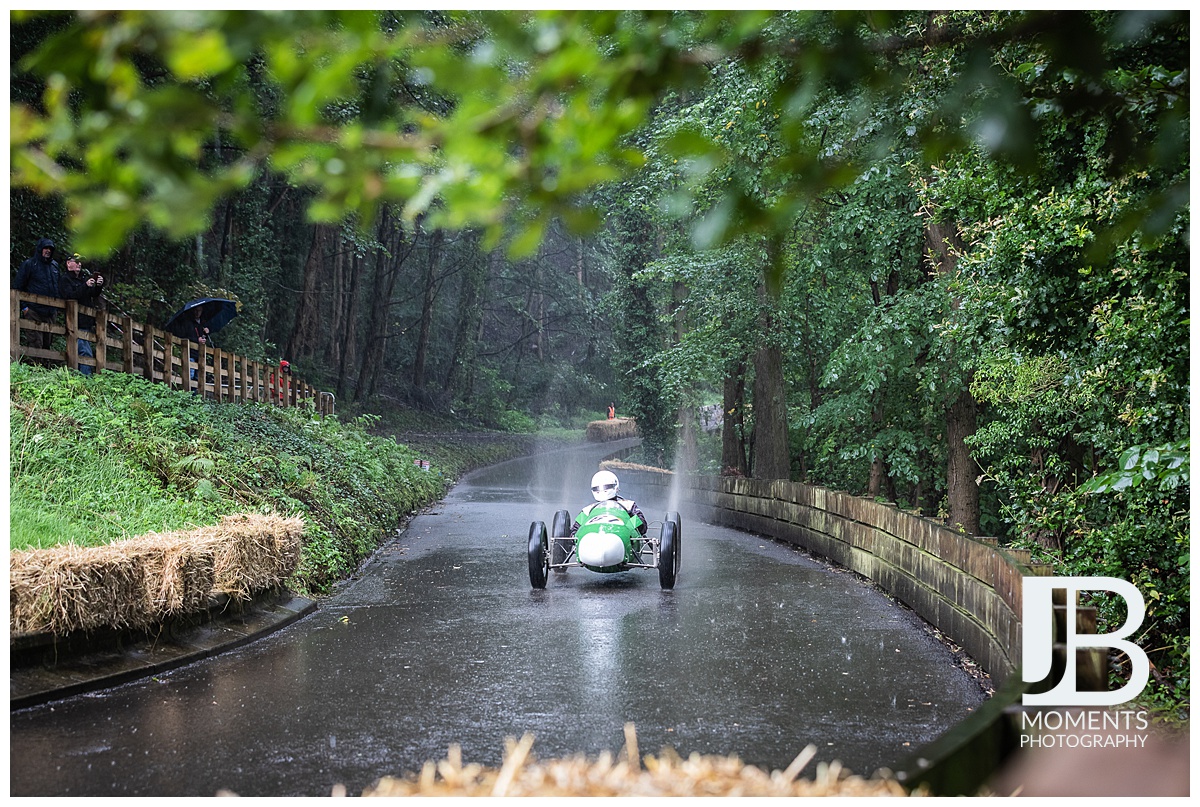 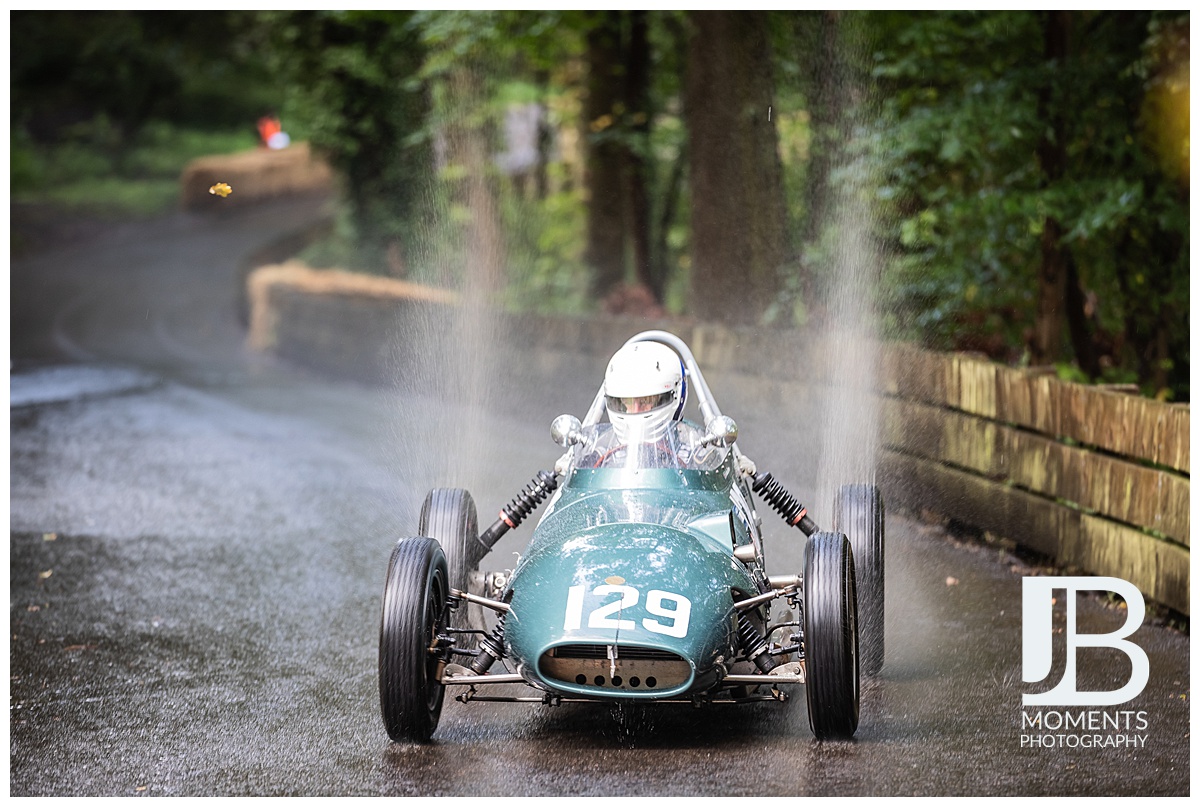 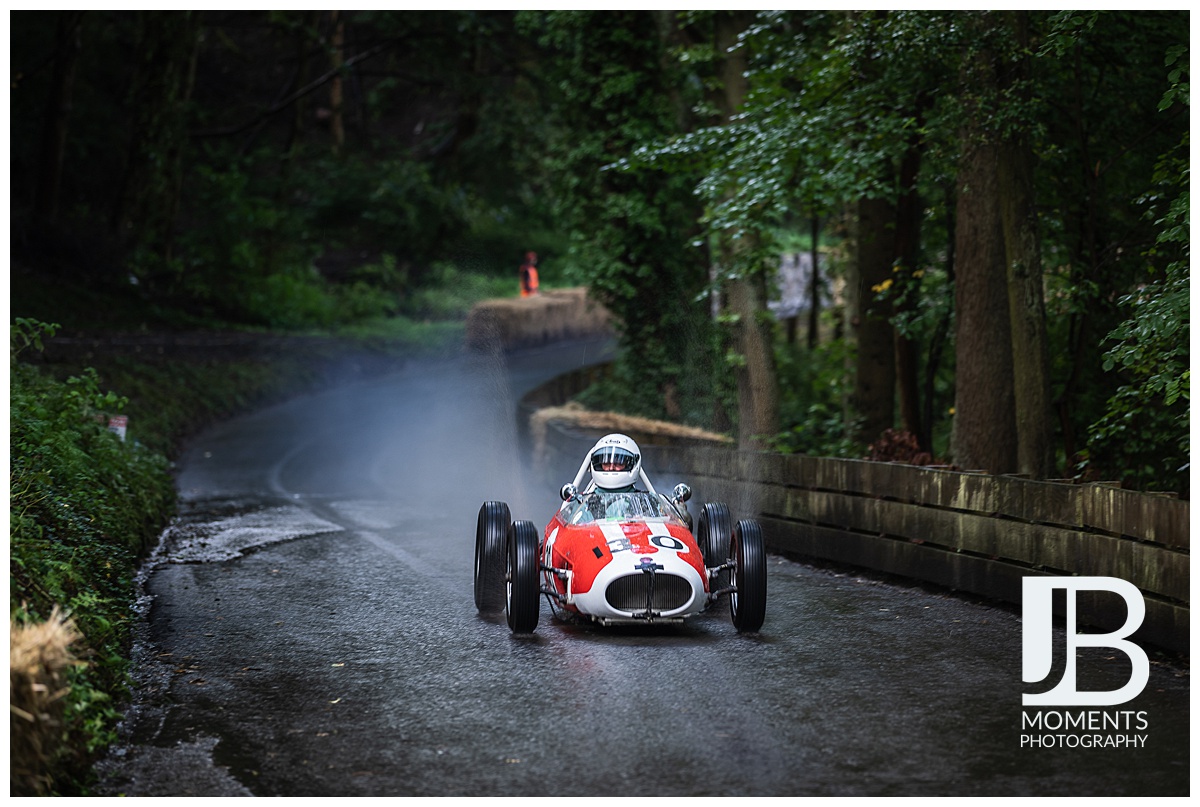 Whilst I shot all of the classes the old single seaters and vintage cars were definitely my favourite (sorry Mr JB)!

After lunch the rain had mercifully stopped and the sun even popped out to say hello. We headed up to the courtyard area and after getting in trouble with the clerk of the course for standing on some hay bales (*whoops*) it was great to see another different aspect of the course. 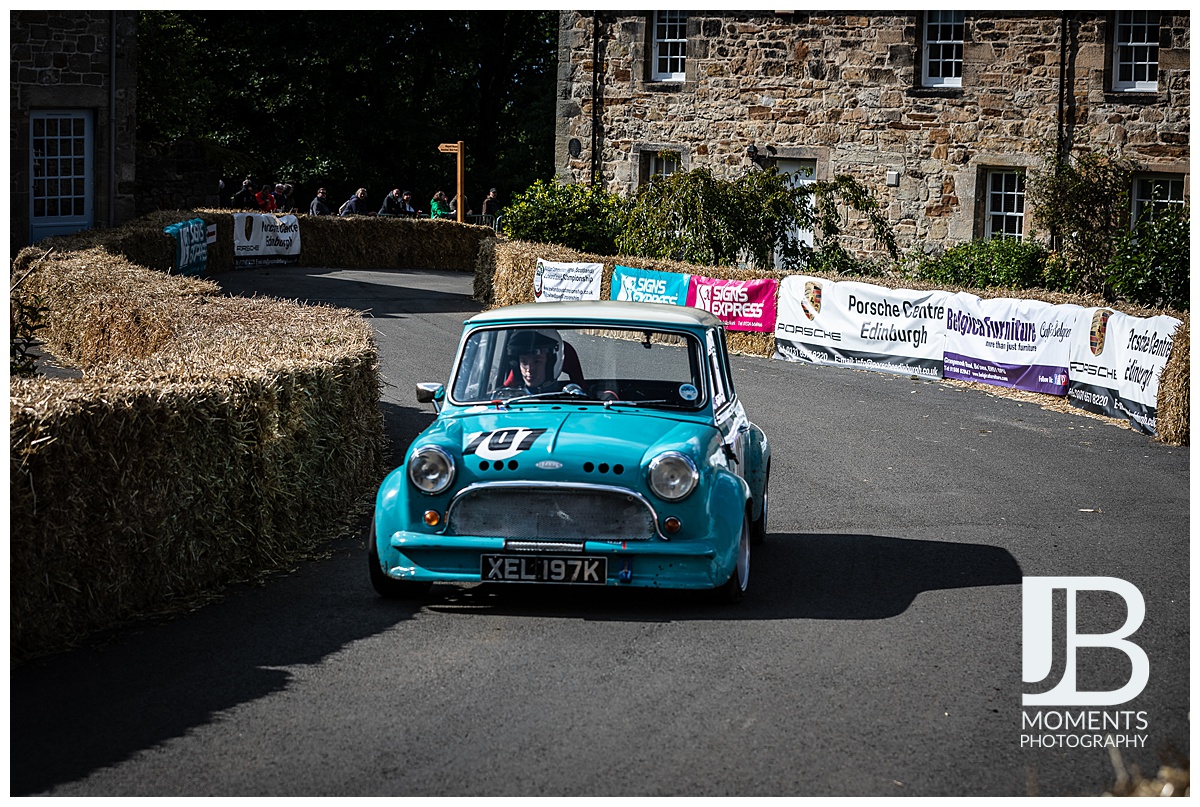 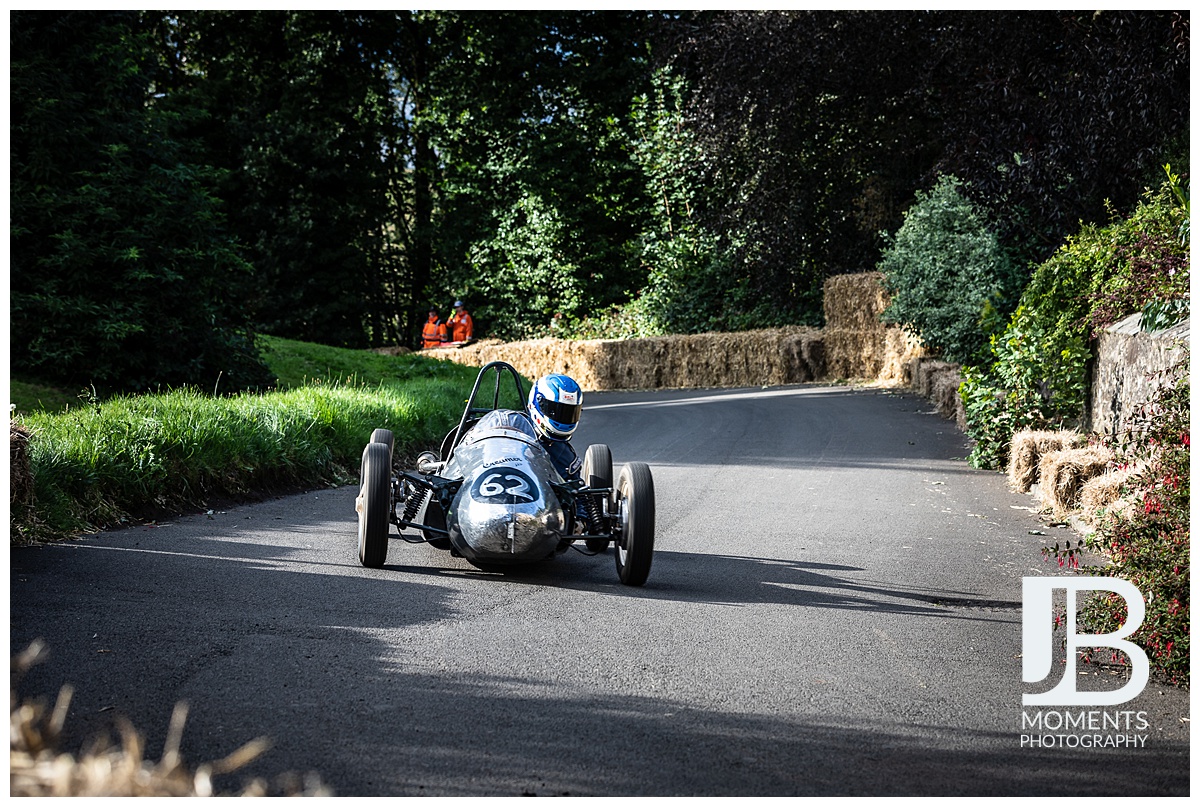 Unfortunately not all cars make it back down in one piece… 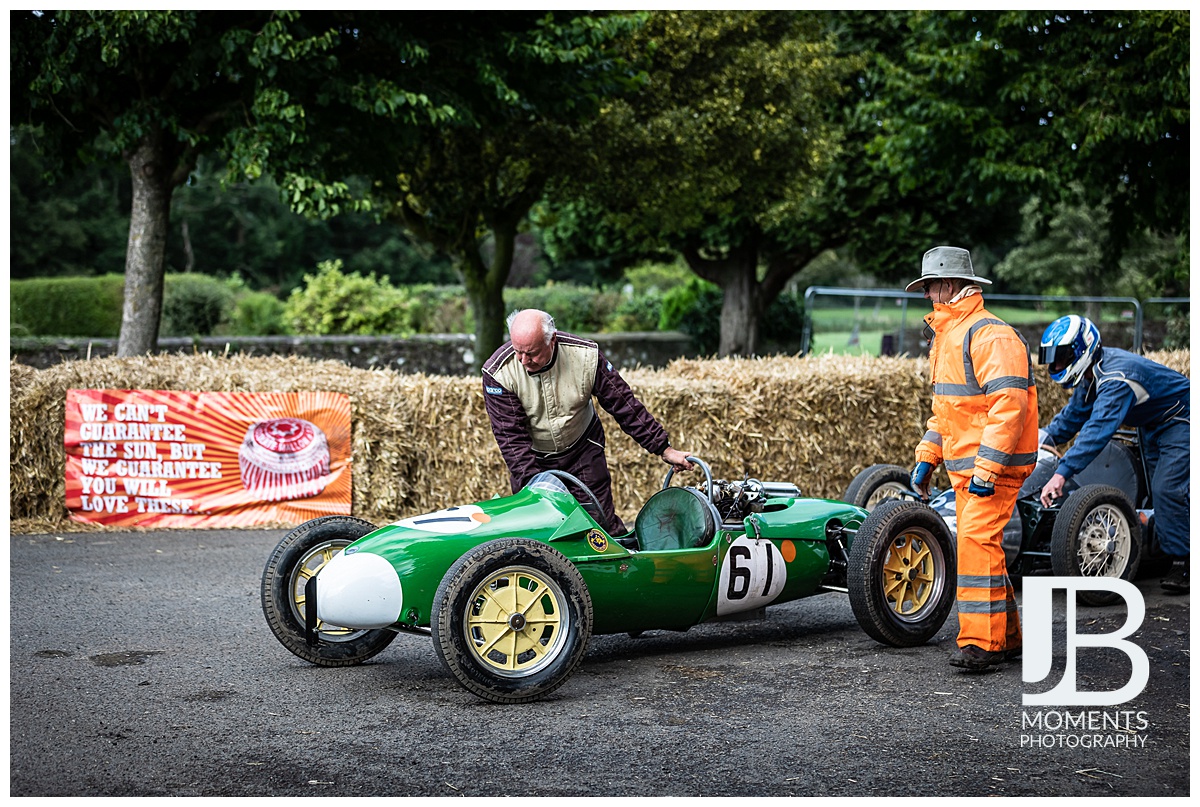 That’s racing for you.

The technique I was most keen to perfect was panning. The basic idea behind panning as a technique is that you pan your camera along in time with the moving subject and end up getting a relatively sharp subject but a blurred background. This gives the shot a feeling of movement and speed. Without this on sideways shots in motorsport the car looks like it isn’t moving.

I hadn’t really tried it much before but soon got the hang of it and was quite happy with my results for a motorsport newbie. 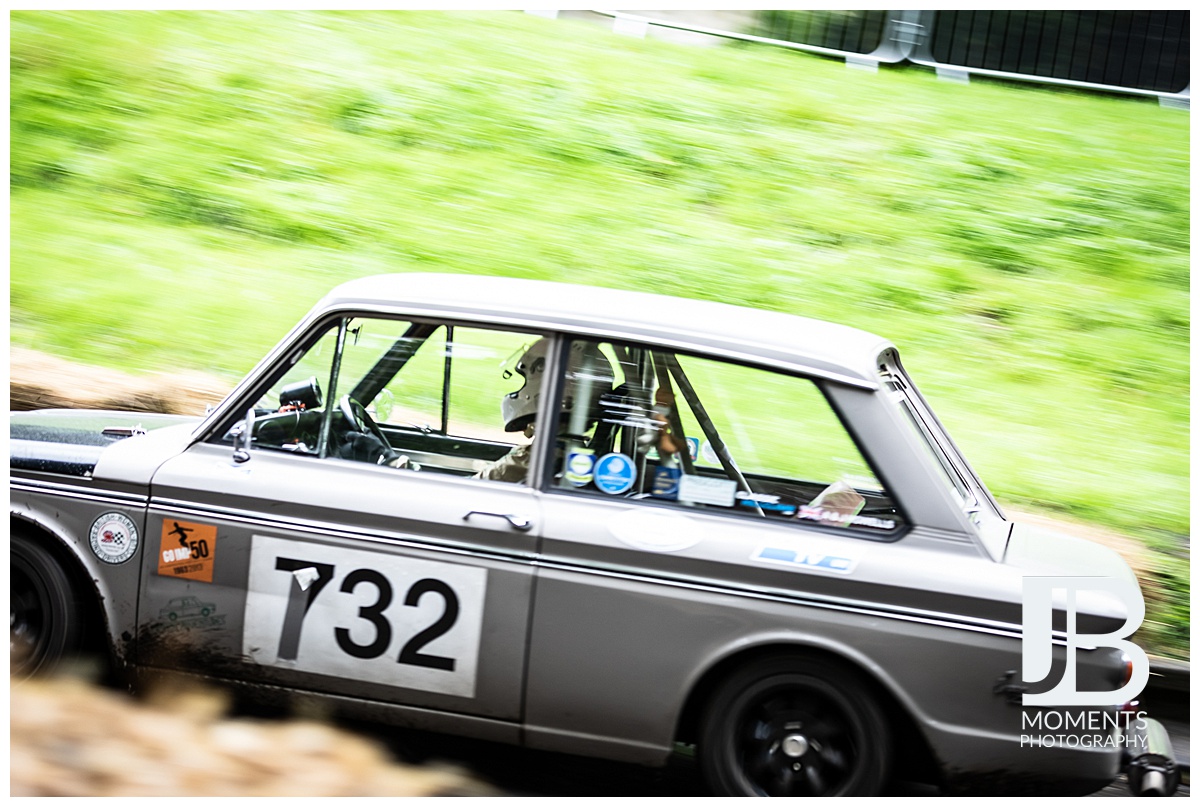 Hill Climbs are a great way to get into Motorsport. The paddock is a right mix of race teams with mechanics and sponsors through to hobbyist drivers like Mr JB who turn up in their car as a one man band. But there is a real sense of camaraderie. Everyone is friendly and willing to help, lend a tool or give advice. It is also a great place to start motorsport photography and you get brilliant trackside access.

I thoroughly enjoyed meeting all the professional motorsport photographers and talking gear and techniques with them. I hope to do more events but only if I’m not booked for my first loves…weddings and babies.