“To plant a garden is to believe in tomorrow”

When Mr JB and I lived in Edinburgh we had a flat with no garden. As the Royal Botanic Gardens were a stone’s throw from where we lived they were a beautiful respite in a bustling city, a place to walk on a Sunday morning and feed the fat squirrels, somewhere we would joke was our ‘backyard’. They are a magical place that we have very fond memories of. Hence, I was delighted when Pamela and James booked me to photograph their wedding there.

James and Pamela met in a bar in Edinburgh whilst out with their respective friends. Pamela wasn’t too keen on giving James her mobile number so the cunning devil stole it! Three years later and James proposed in Greece which Pamela said was just in time as she thought it was never going to happen. The proposal itself took two attempts as the first time Pamela thought James was trying to steal her Panini!!

James is Scottish and Pamela is Italian and when I went to her room at the Inverleith Hotel to capture some of the bridal prep I had my wedding umbrellas with me, just in case. I was greeted at the door by two gorgeous, very animated Italian ladies that were clearly very excited about something! When Pamela realised I was completely confused she translated that they were very happy that I had brought wedding umbrellas as it looked overcast and they were thinking they might have to go out and buy some! As it turned out we didn’t need them – but you never know in Scotland…. 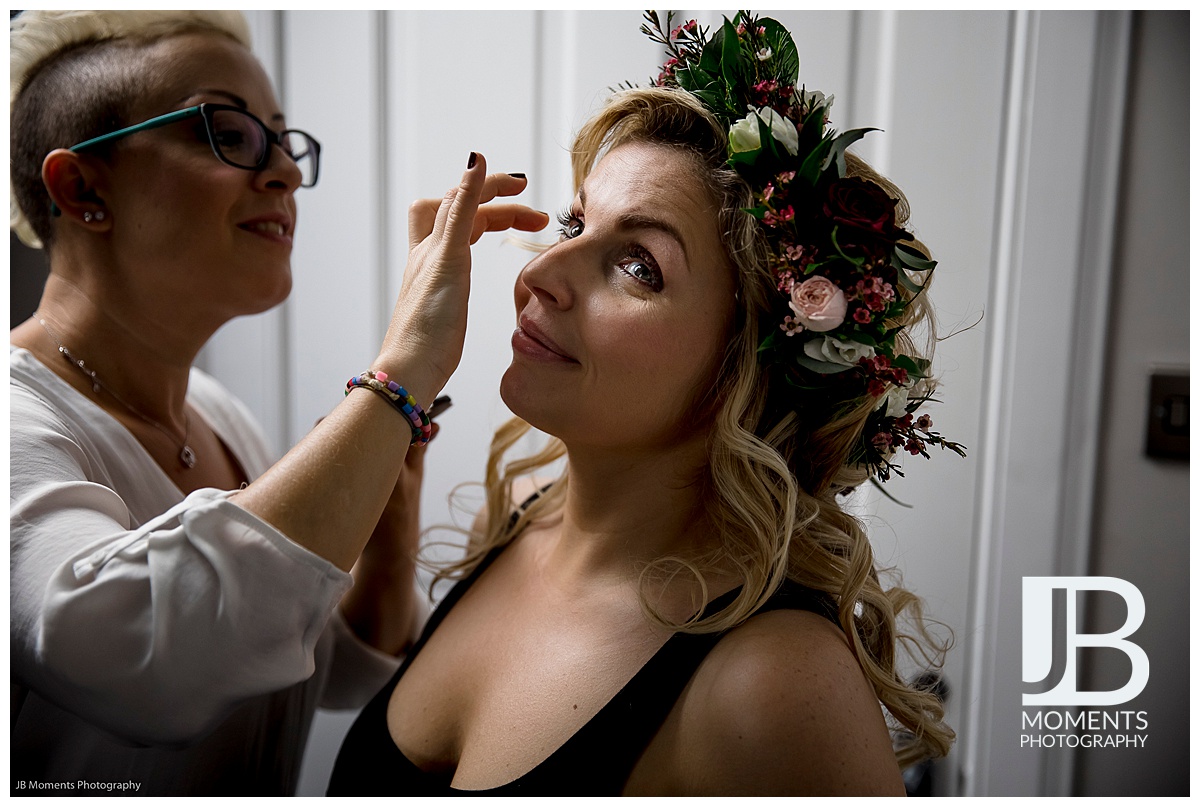 Pamela looked absolutely radiant. As they had chosen the garden venue she had gone with a stunning floral crown in her hair and the overall effect once she had her dress on was off an ethereal goddess. James was a very lucky guy.

I left Pamela in her maids’ good hands to get to the Caledonian Hall, the wedding venue they had chosen inside the Gardens. Pamela and James picked the venue as they too love coming to the Gardens in their downtime and once they realised they could get married there nowhere else came close for consideration. 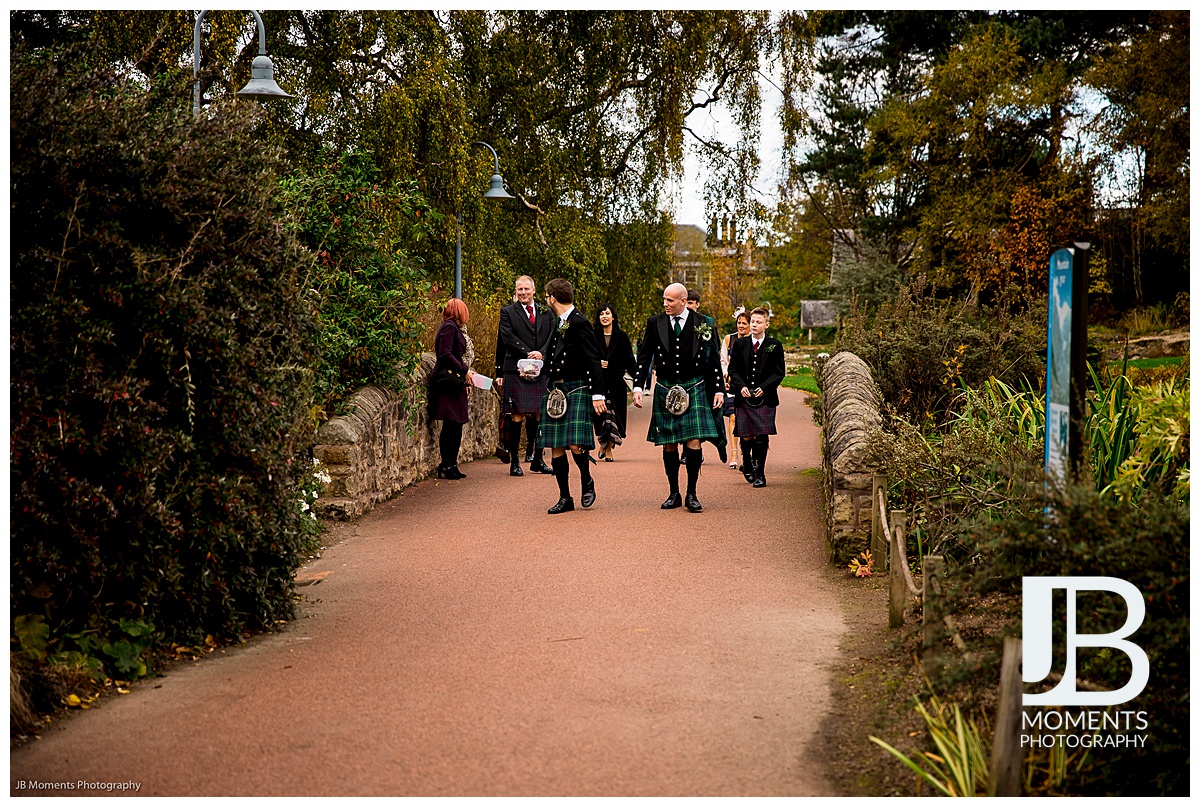 The Groom and his Best Man arrived resplendent in Stewart Tartan. As the guests arrived they were played in by Davie Christie on his violin.

As half the guests were Italian the service was conducted by the registrar and one of the couples friends who is an interpreter for a living. She also interpreted the two readings the couples had chosen and all the speeches. I think it all sounded more romantic in Italian. 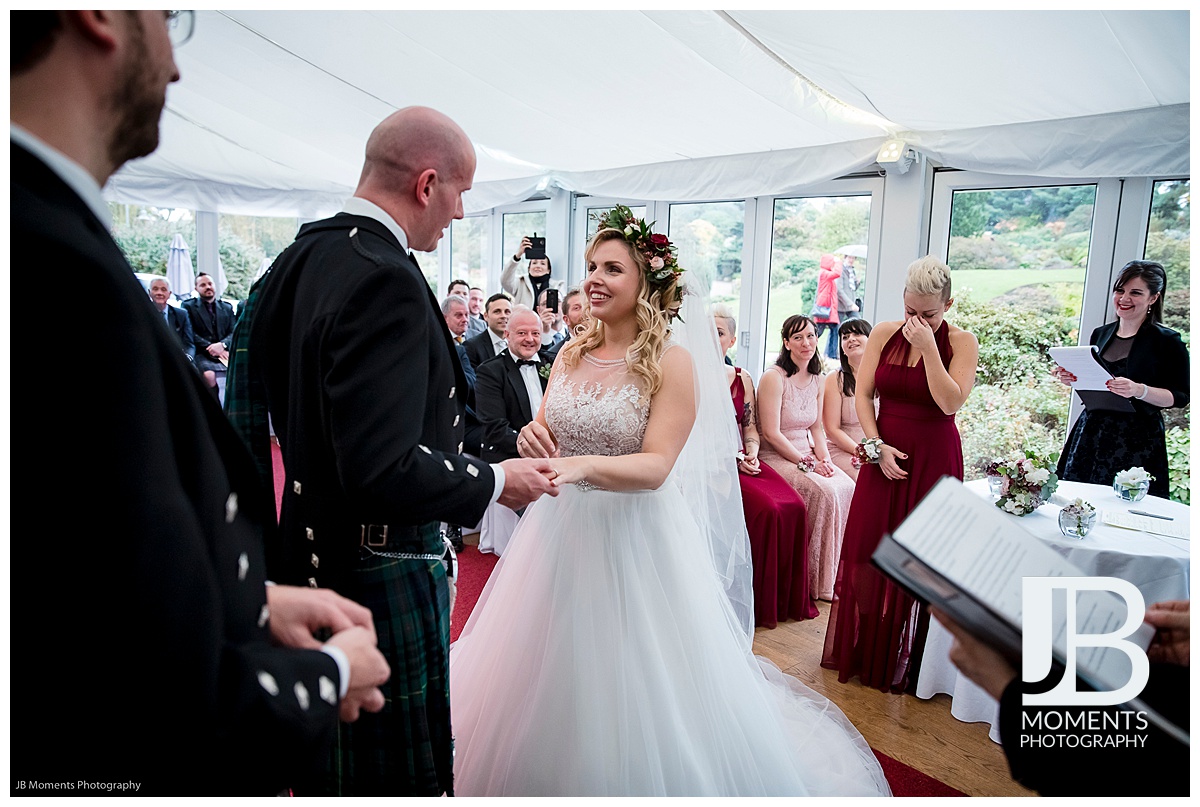 James also spoke some of his vows and his speech in Italian which was a lovely touch.

The gardens looked so beautiful in all their autumnal splendour. The new Mr and Mrs Stewart were so photogenic. I could have spent hours walking them around the garden taking pictures. In fact, I nearly broke my own rules which are to get the couple back to their party and guests as soon as possible. 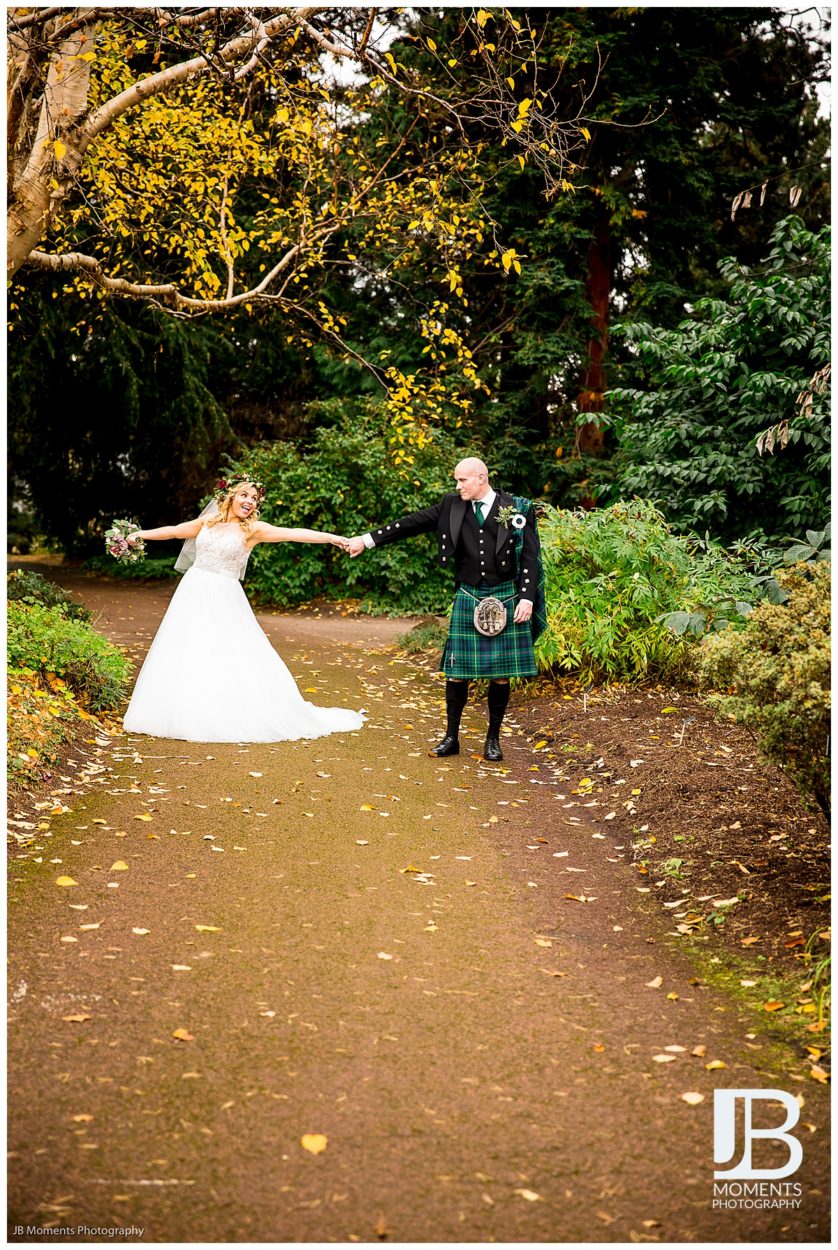 Their favourite parts of the Gardens included the Rock Garden and the Chinese Garden. I made sure we got lots of great pictures in those places. 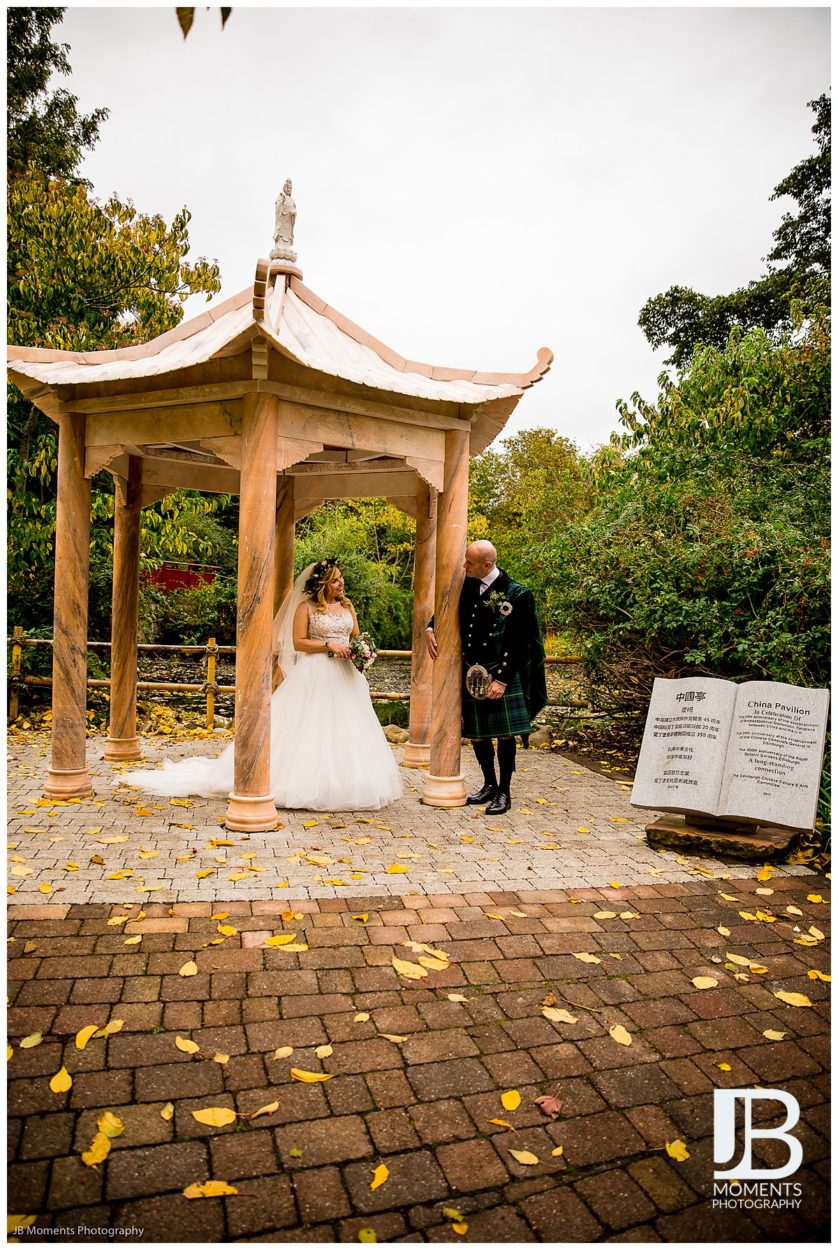 Confetti? Who needs it!

Due to strict conservation rules, the guests weren’t allowed to throw confetti in the gardens. But who needs confetti when you have leaves! 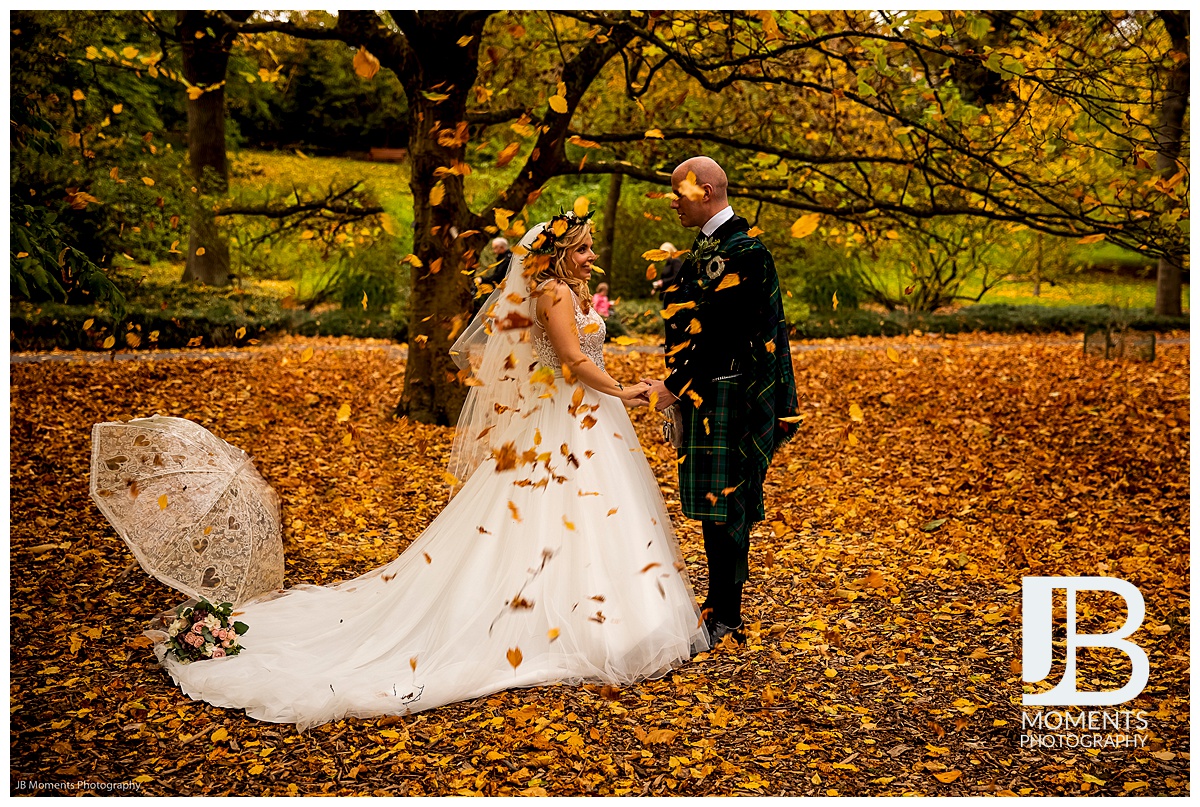 The couple had chosen Alice in Wonderland characters for their seating plan and with glass candelabras, lots of flowers and a naked wedding cake the Caledonian Hall looked absolutely magical. 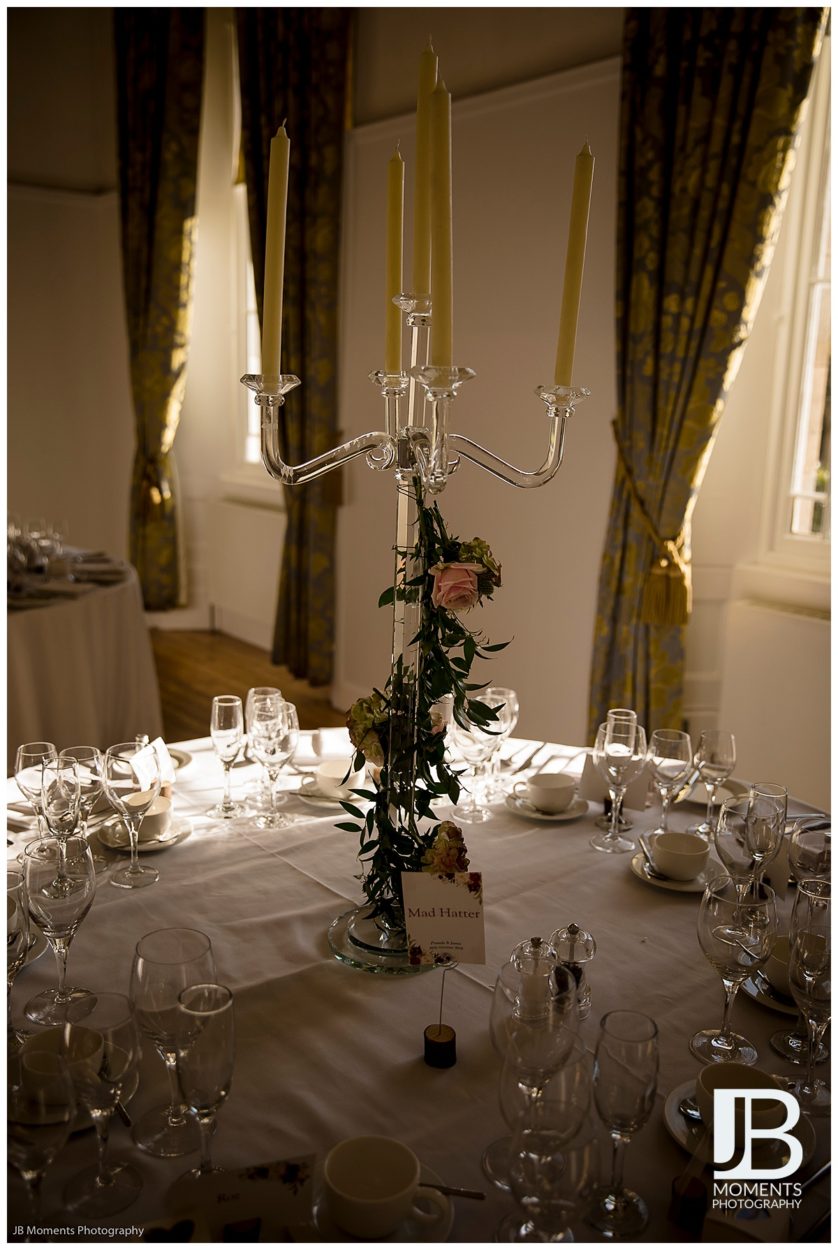 The Maid of Honour kicked off the speeches. I can honestly say was the most beautiful speech I’ve heard all year. The Italian translation sounded even more poetic.

After the speeches, I bade them farewell before they tucked into the wedding breakfast and then started dancing the evening away. At the end of the night, they were serving the guests pizza. I just hope nobody tried to steal the Bride’s slice!