Kayleigh and Andrew met in 2016 through mutual friends at a taxi rank outside Mcdonald’s after a night on the town. Andrew wasn’t even in Kayleigh’s taxi but came to the rescue when she had run out of cash to pay the driver and everyone else in the cab was too drunk to pay! What a gent 🙂

Fast forward to Christmas 2020 and Andrew surprised Kayleigh with an engagement ring wrapped up amongst her other gifts. I say surprised…Andrew had been texting Kayleigh pictures of rings to see which one she liked. So I don’t think it was a total surprise!

It was lovely to be back at the Grange Manor Hotel for my second wedding there this year. 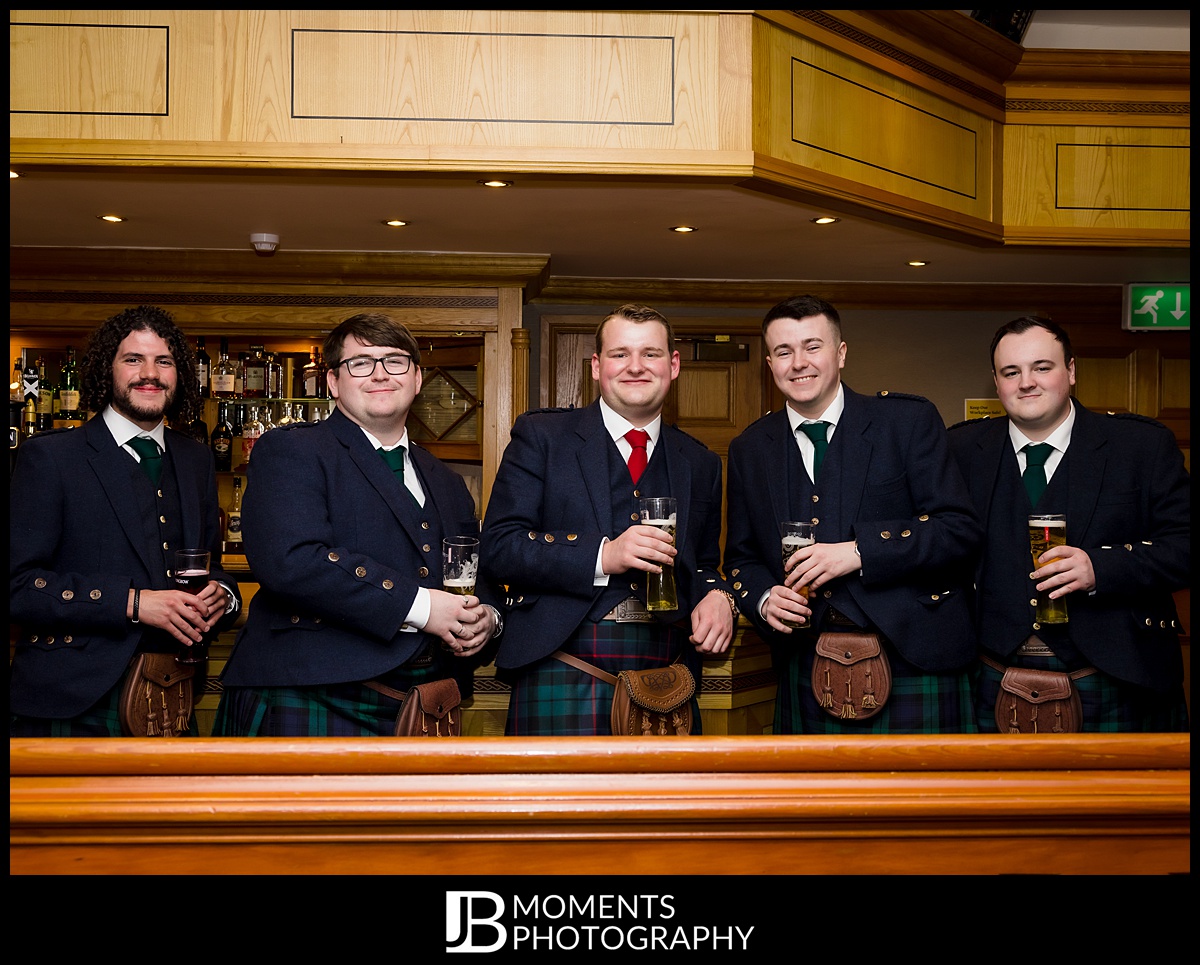 When I got there, Andrew and his guys were making sure they were well hydrated in the hotel bar before the proceedings.

As I headed up to the bridal suite I expected to find the usual chaos and last-minute panics as everybody gets ready. 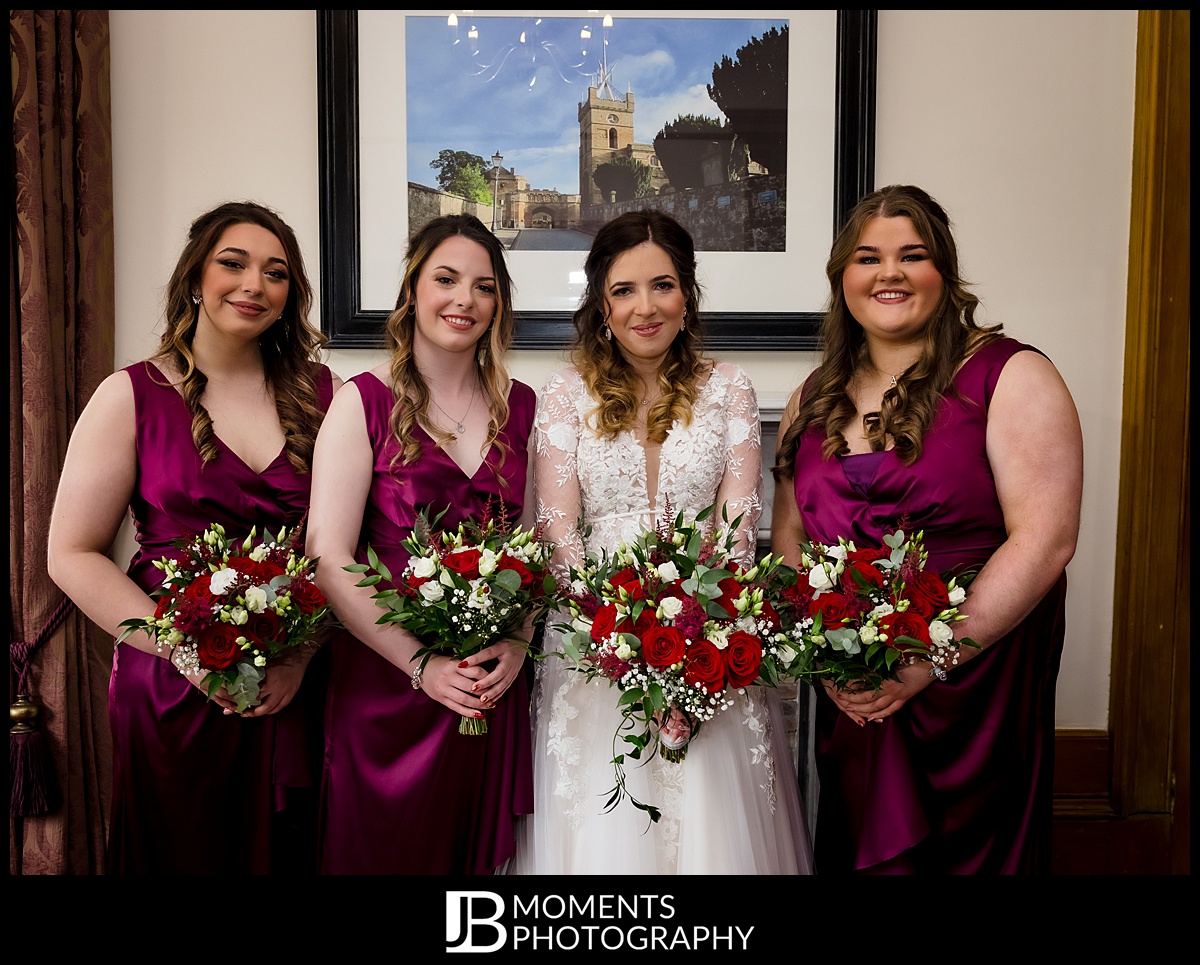 But my beautiful bride and her bridesmaids were all ready and just chilling! I’m sure you’ll agree the bouquets from Irene’s Florist looked amazing.

It was a lovely ceremony with lots of personal touches 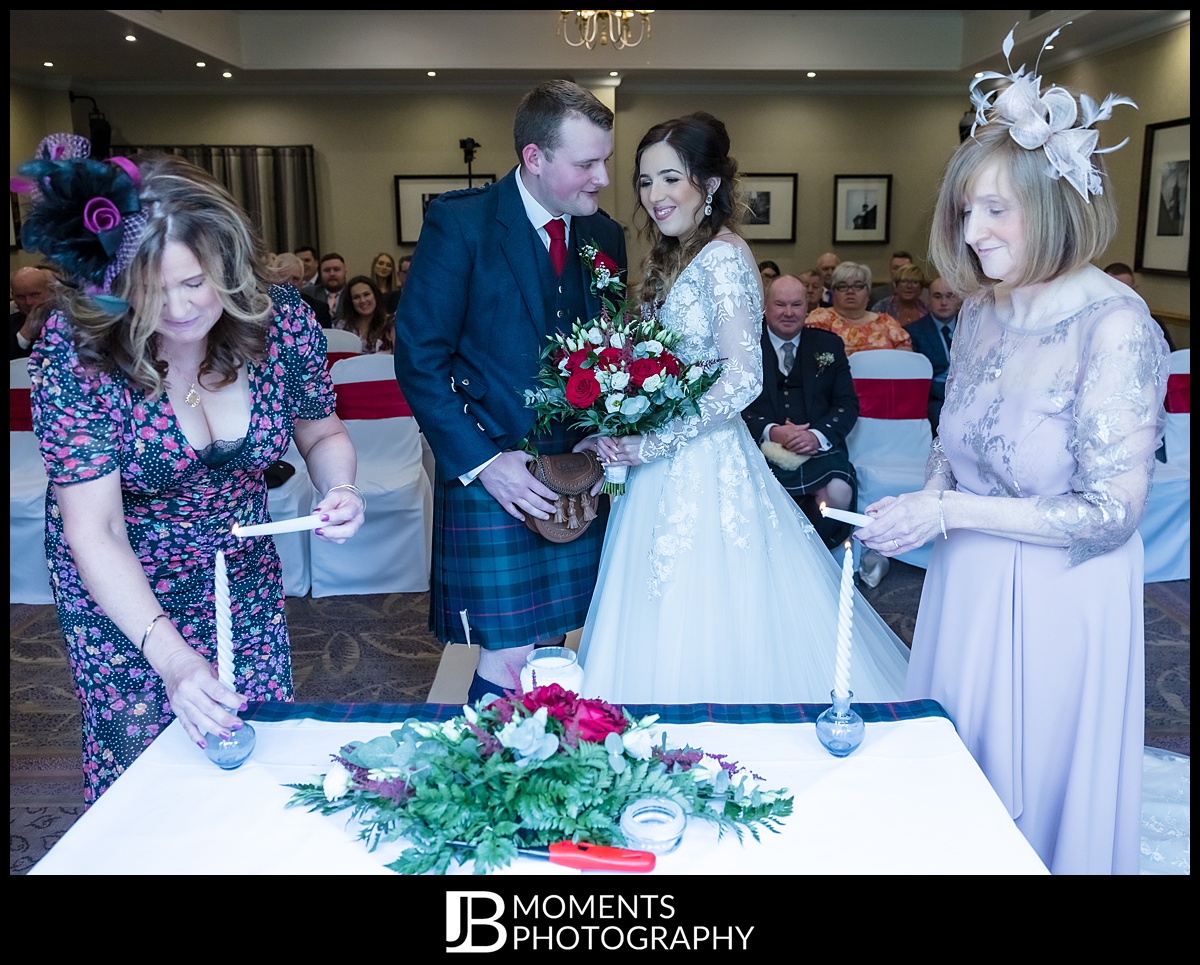 At the beginning, both mums lit a candle from one source to signify the union of the two families. 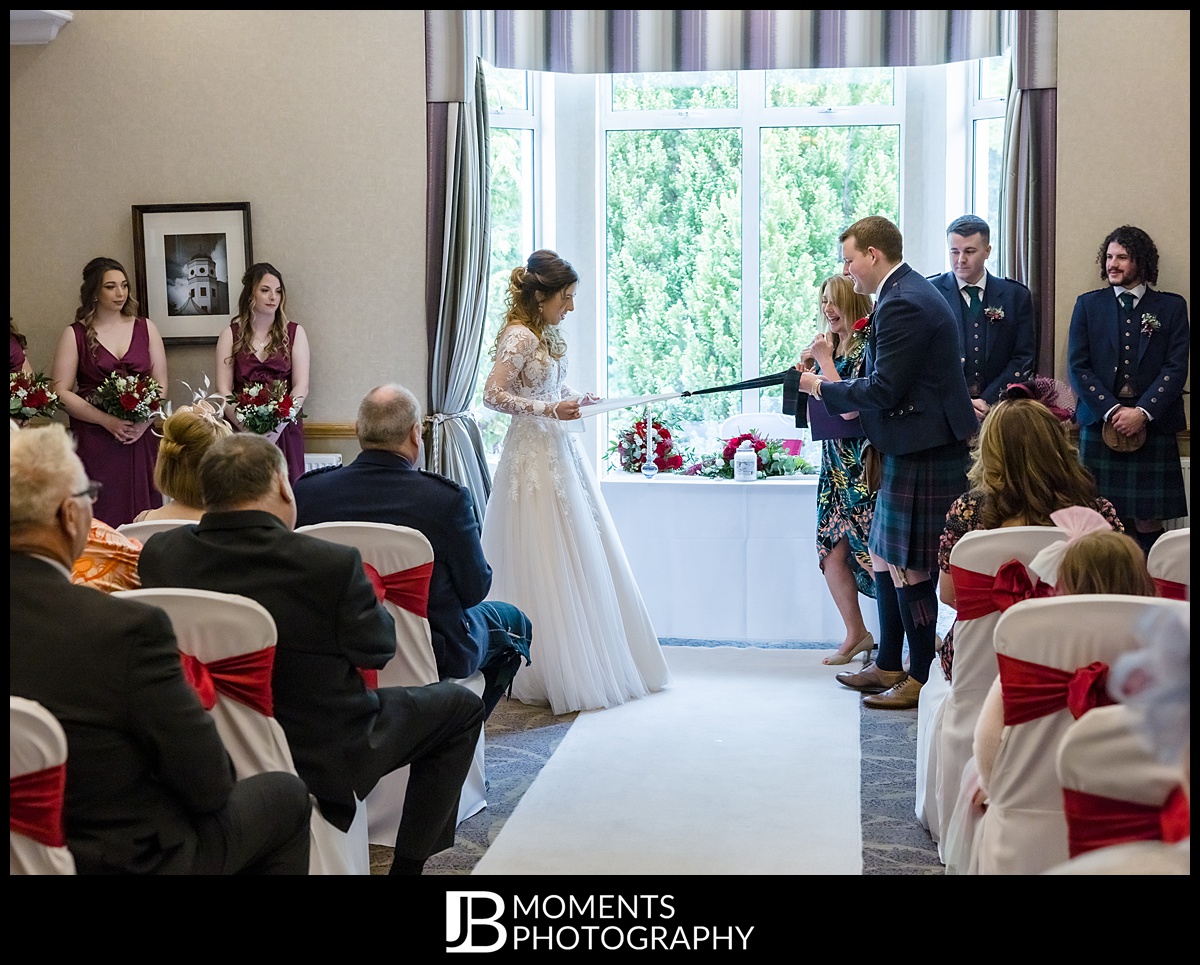 Kayleigh and Andrew ‘tied the knot’ with a traditional handfasting ceremony. 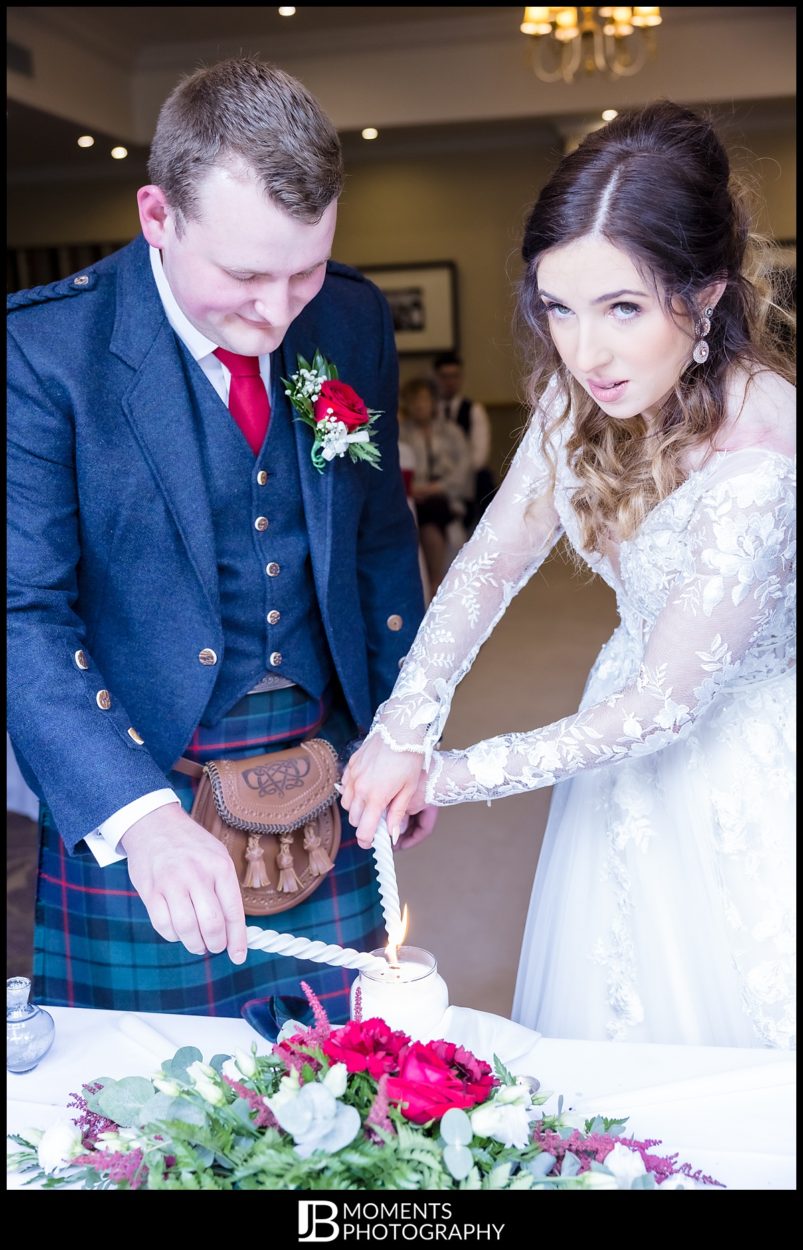 And towards the end of the wedding ceremony, Kayleigh and Andrew took their mum’s candles and lit one candle to signify their unity as husband and wife.

But my favourite part about their ceremony was their Gin Box. A wooden box in which they had placed a nice bottle of gin and letters to each other to open on their 1st wedding anniversary. 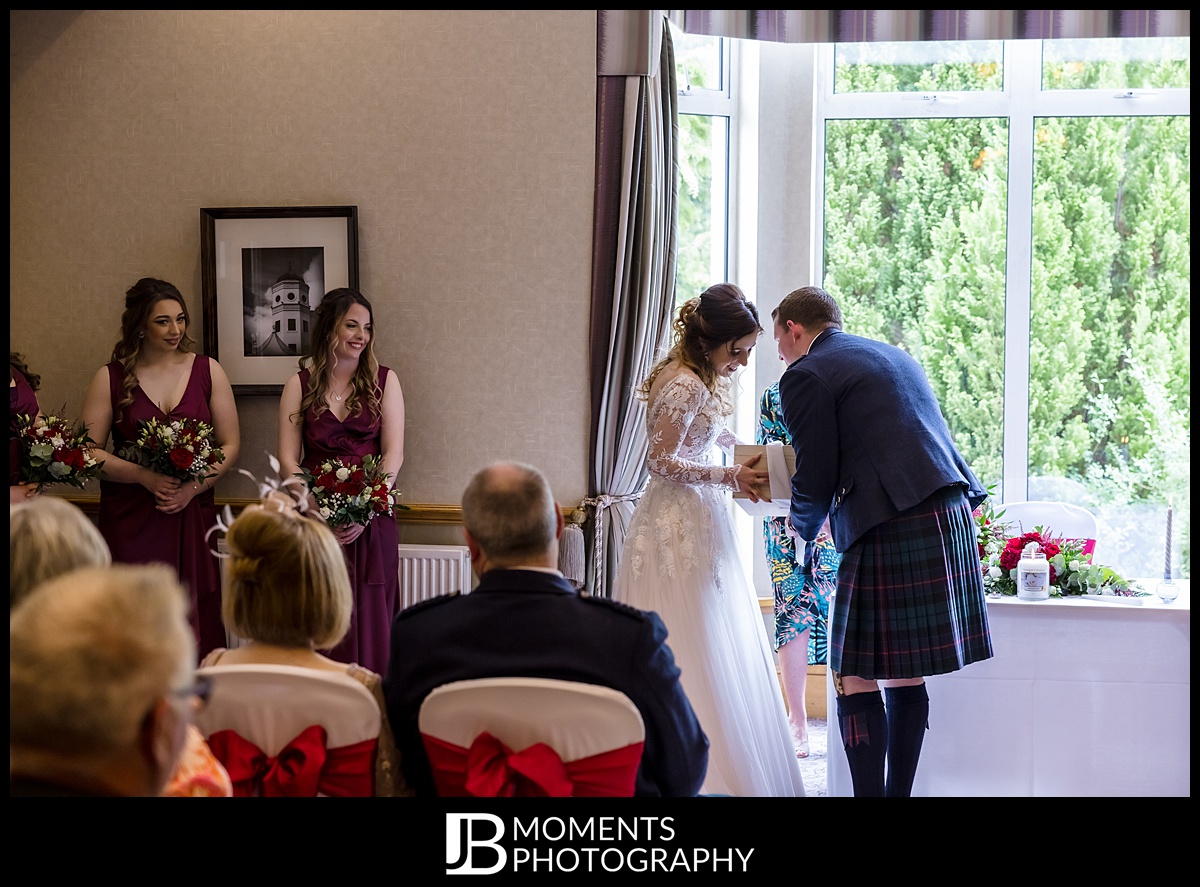 They sealed it with their handfasting ribbons. Isn’t that lovely?

As usual, here in Scotland, we seemed to be getting all four seasons in the one day. But as we headed outside for the group shots the weather was playing nice.

When we got to the wedding party images we started fairly traditional. 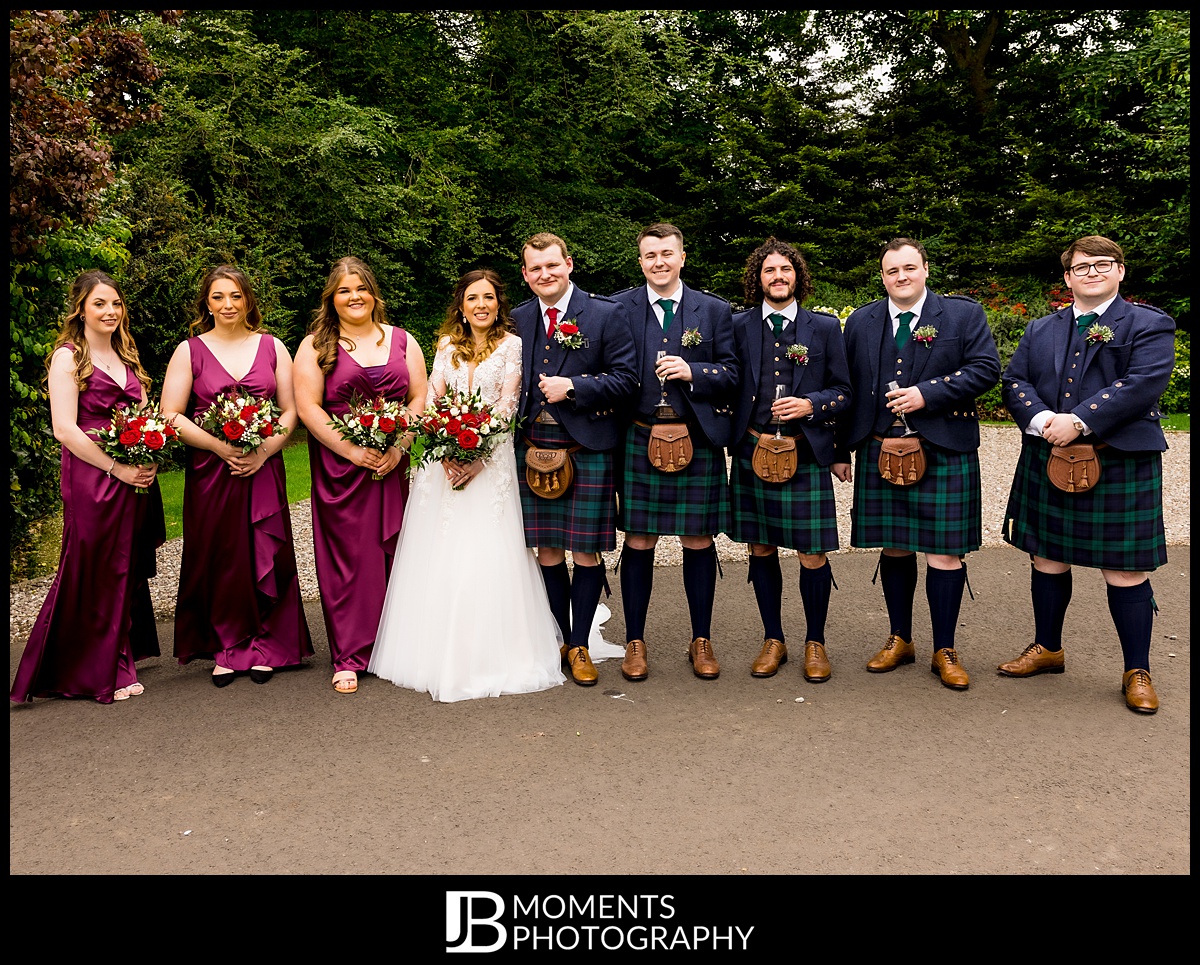 Gorgeous as they all looked I knew we could do better than that! 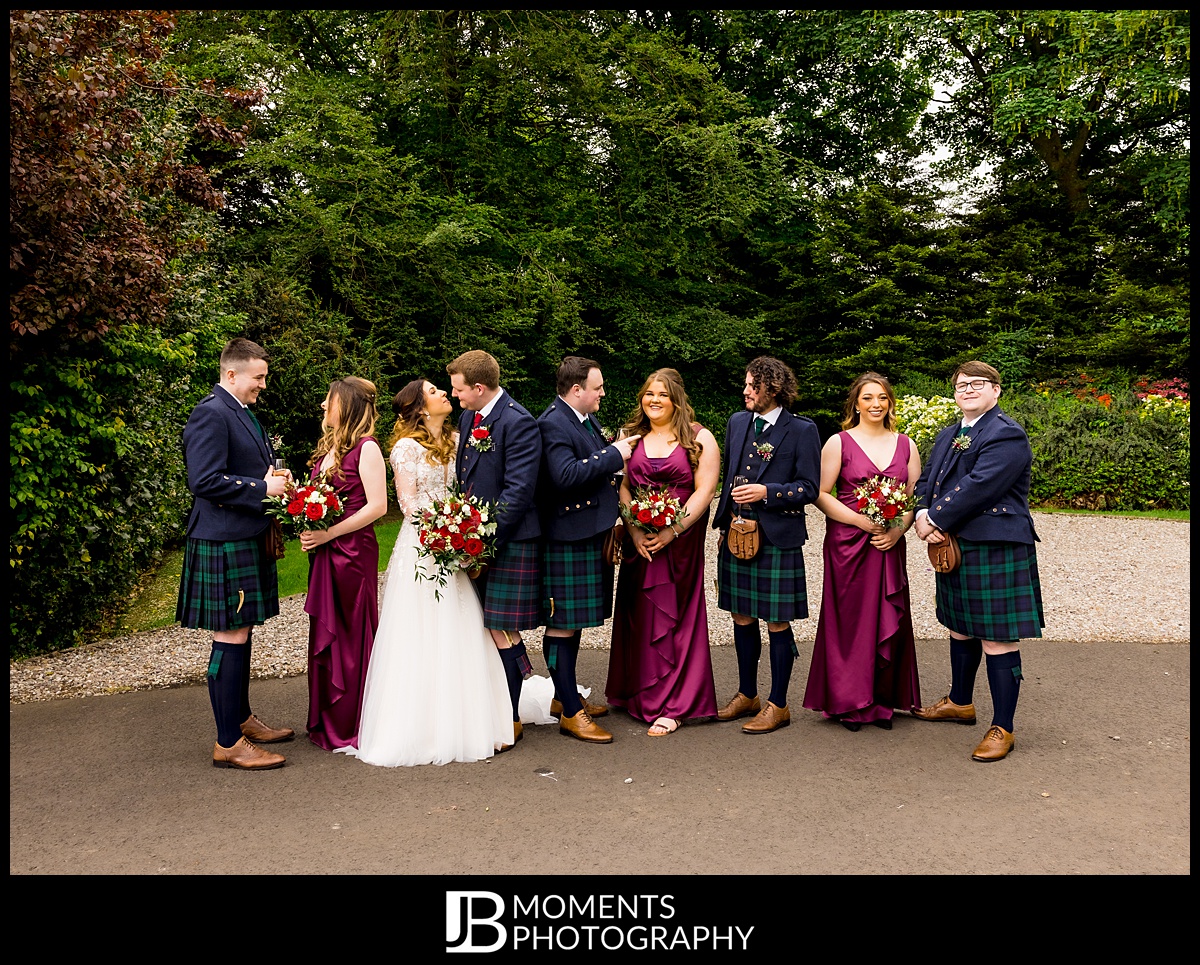 It was deliciously awkward as those with other halves could feel them watching from behind me as I made them all snuggle up!

My couple were super relaxed and didn’t seem to mind me dragging them around the hotel to my favourite spots. 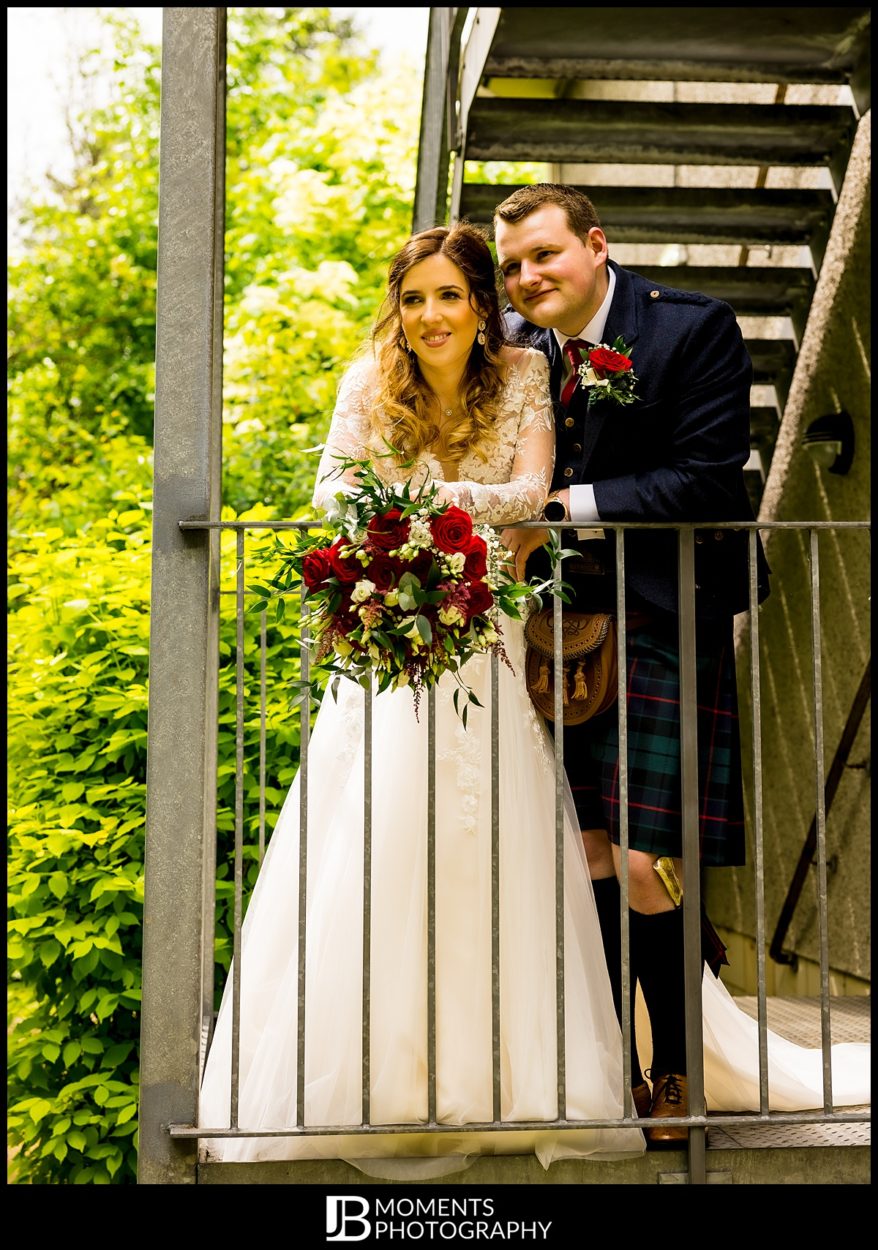 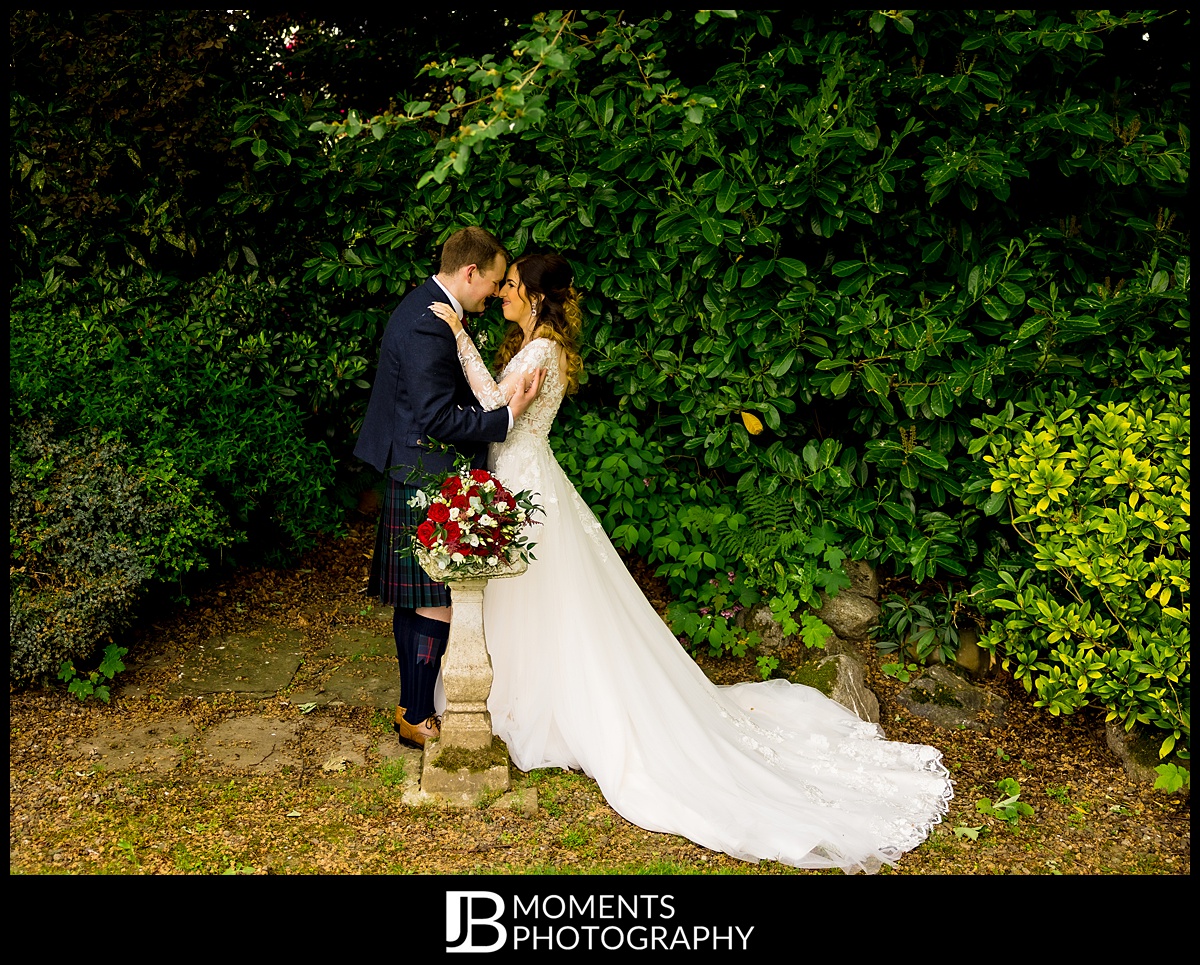 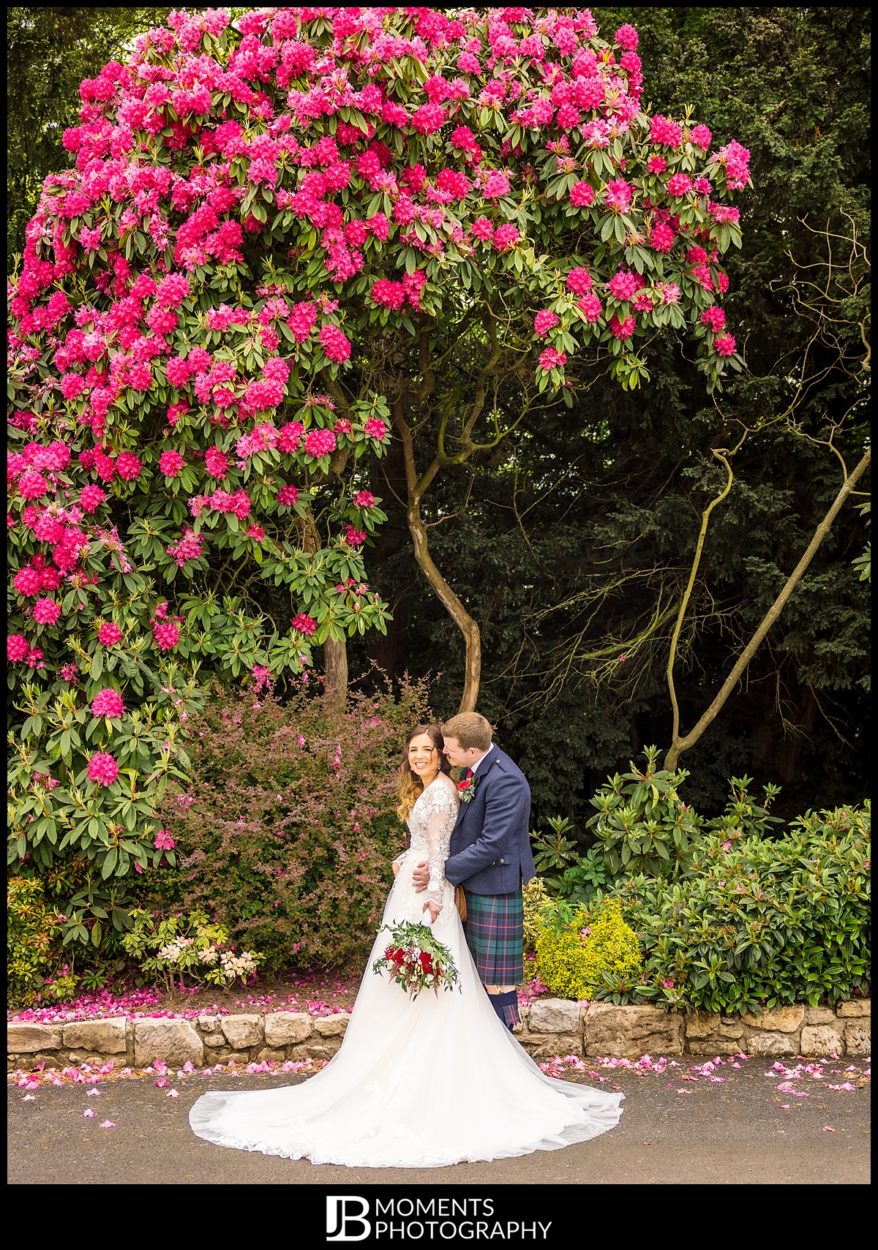 And in front of this shocking pink rhodedendrum that was giving off it’s own confetti. Isn’t Kayleigh’s wedding dress beautiful?

But my favourite image from the whole wedding was when I was getting them to walk towards me hand in hand. 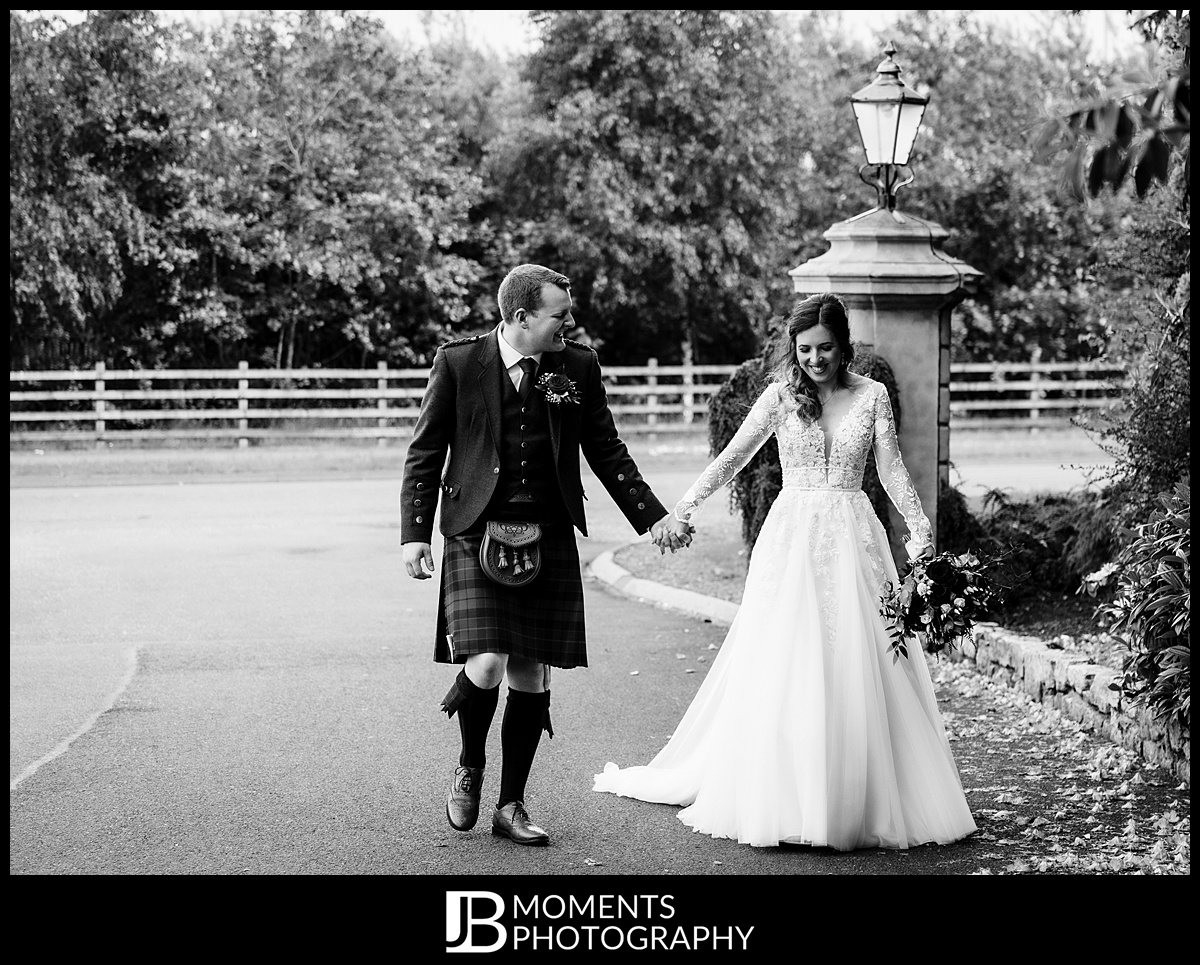 I love their expressions and how they seem to be completely oblivious to my camera and the videographer. I think it totally suited being changed to black and white and you would never know that right behind them is a huge Asda distribution centre!

All too soon my time was up, but not before I got a picture of the wedding cake. It was a chocolate cake made and decorated by Darrell’s Wedding & Celebration Cakes. 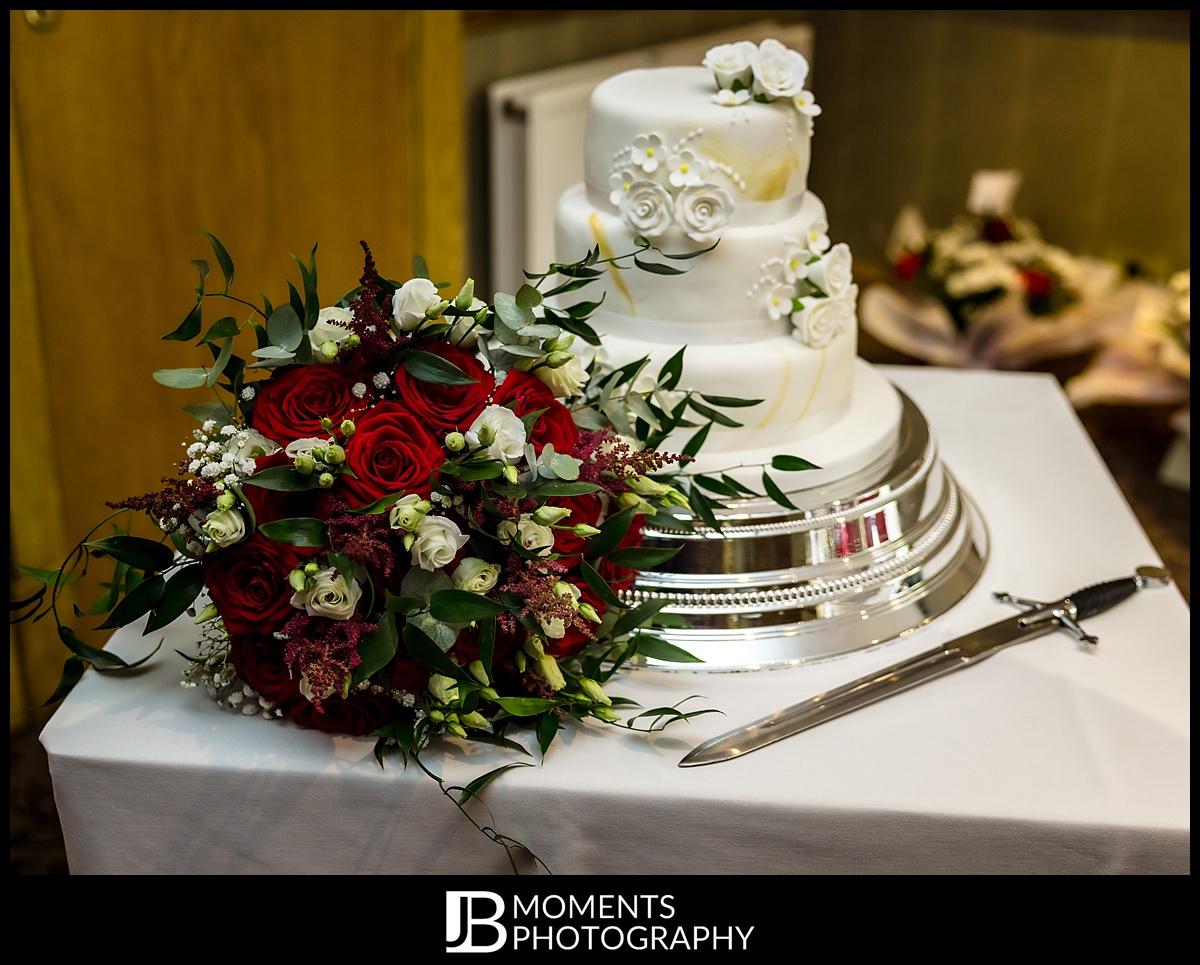 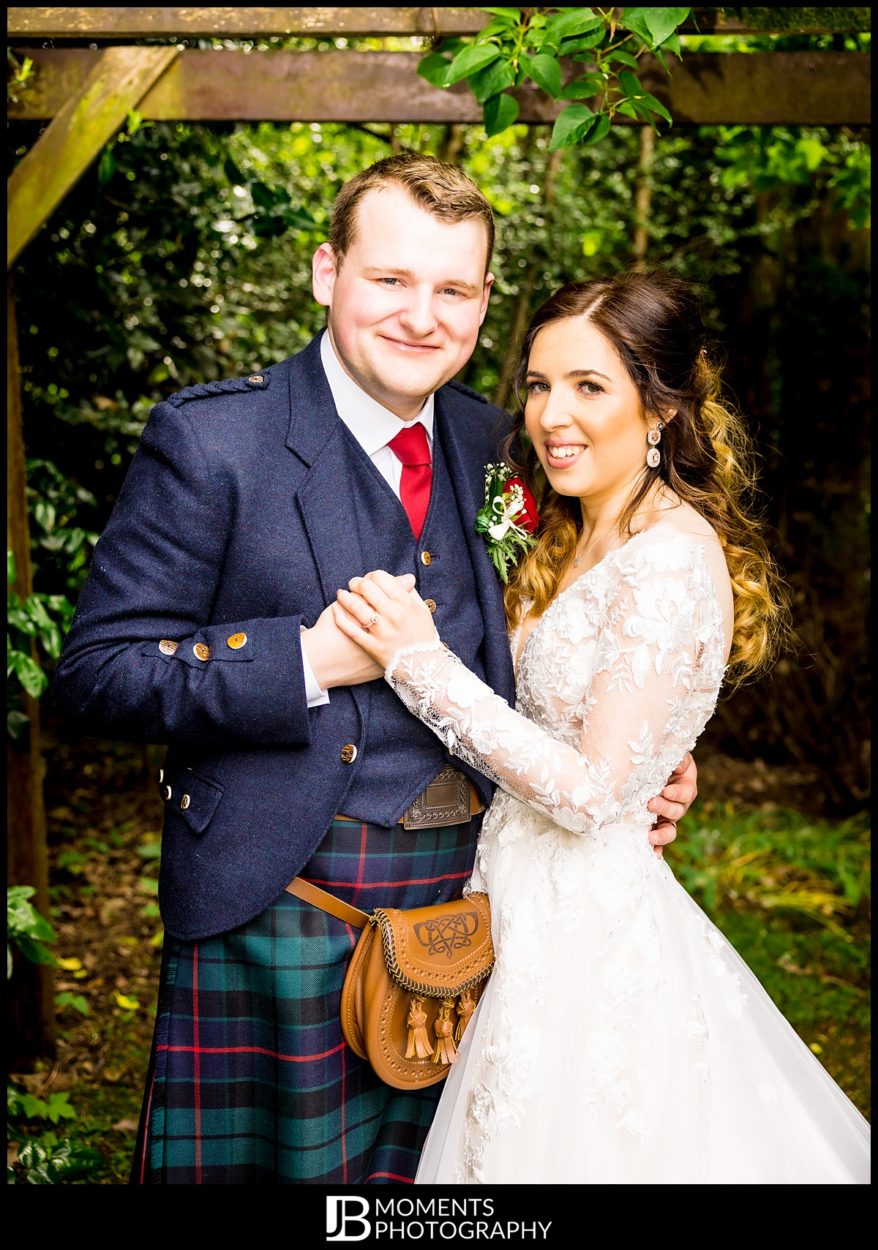