Glenbervie House is literally on my doorstop. I could walk to it. And you have no idea how long I’ve wanted to shoot a wedding there. 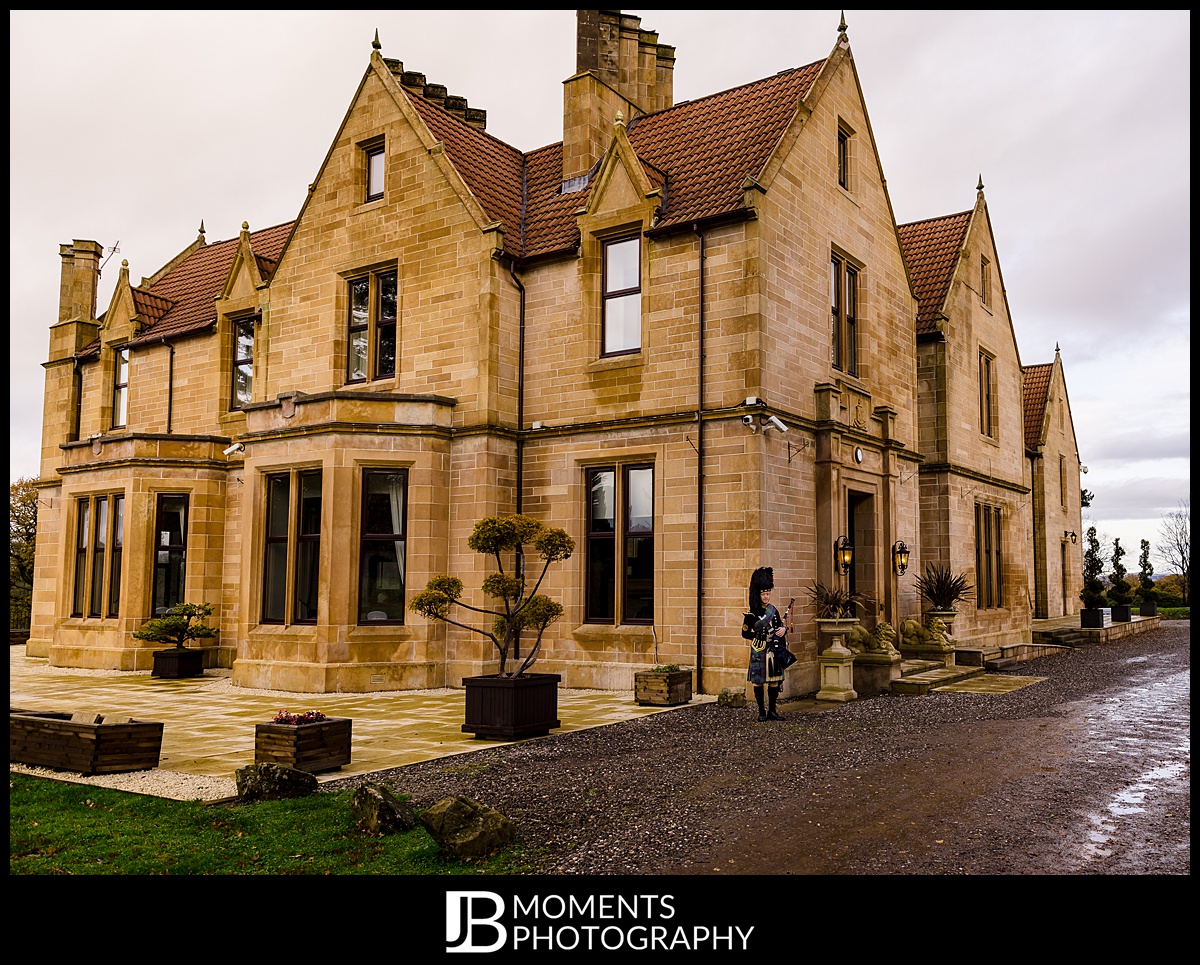 It only took a couple from Manchester to book me…

Okay, let’s back up a little. Ewen is originally from Stenhousemuir and he met Manchester born Sarah when they were both working in Germany.

Ewen asked Sarah out for a drink. Despite taking her to a venue a train ride away and only paying for his own ticket (he claims it was a faulty ticket machine), they had a good time and saw each other again. Fast forward a few years and Ewen proposed to Sarah at home whilst they were both snuggled on the sofa, to her total surprise!

They decided on Glenbervie House and booked me (yay!) for a spring wedding. Then Covid struck and they were postponed until November and my penultimate wedding this year.

Sarah and Ewen had decided on a humanist ceremony and a hand fasting. Ewen’s ribbon was his tartan and Sarah’s chief bridesmaid and best friend embroidered one especially for her. 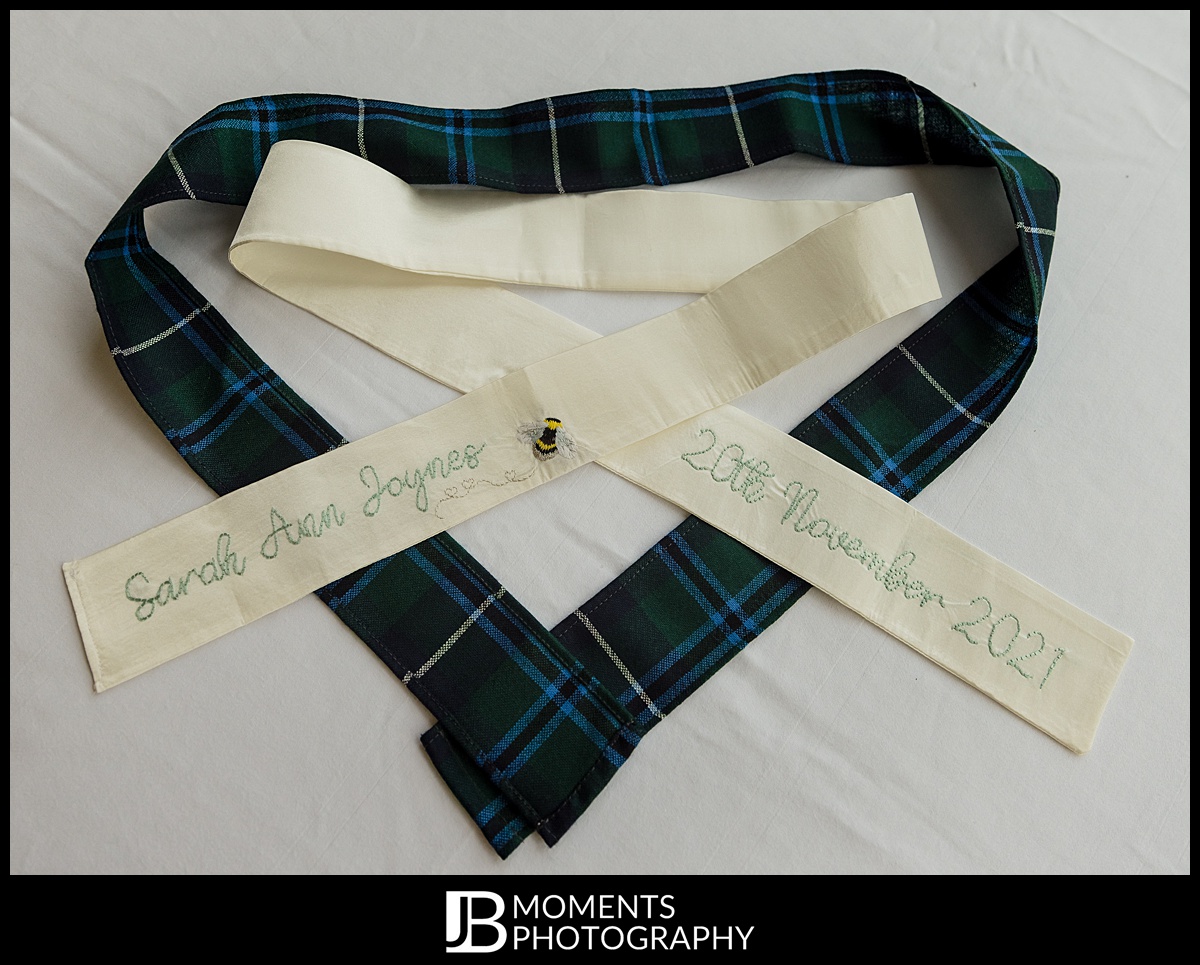 With a bumblebee for Manchester and three hearts, one for each of Sarah’s children. Isn’t it beautiful? Mind you, Vicki who did it had plenty of practice as she had already created one with the first date on and unpicking wasn’t an option so she had to redo it all over again!

This wedding was full of so many personal and sweet touches like this.

A Bevvy of Beauties

As well as Sarah’s best friend, her eldest daughter was a bridesmaid and her youngest daughter and nieces were flower girls. 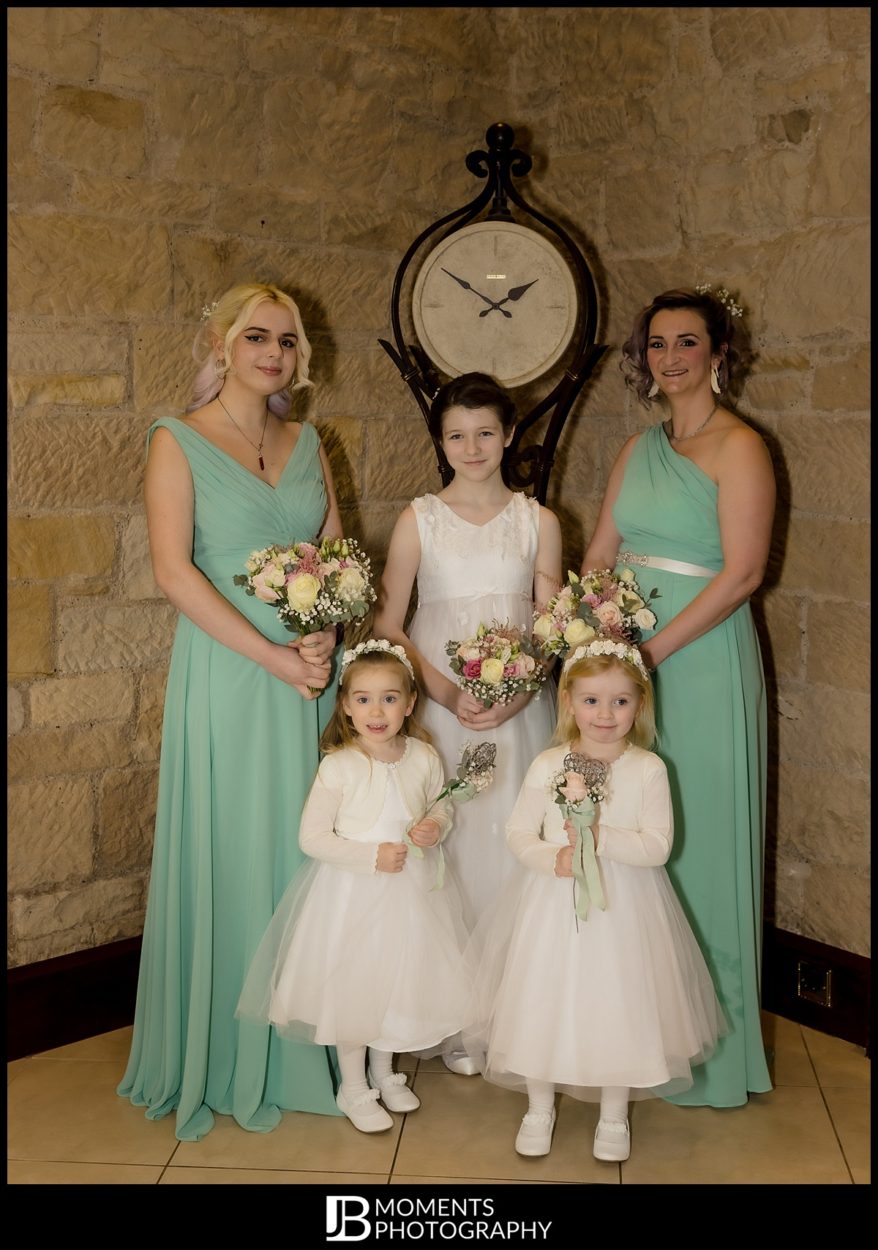 Aren’t they stunning. The flowers were gorgeous all done by local florist Irene’s Florist. I love the wands the two littles had.

Sarah’s dad had been poorly and I think everyone was relieved and a little emotional to be able to see him walk Sarah down the aisle. 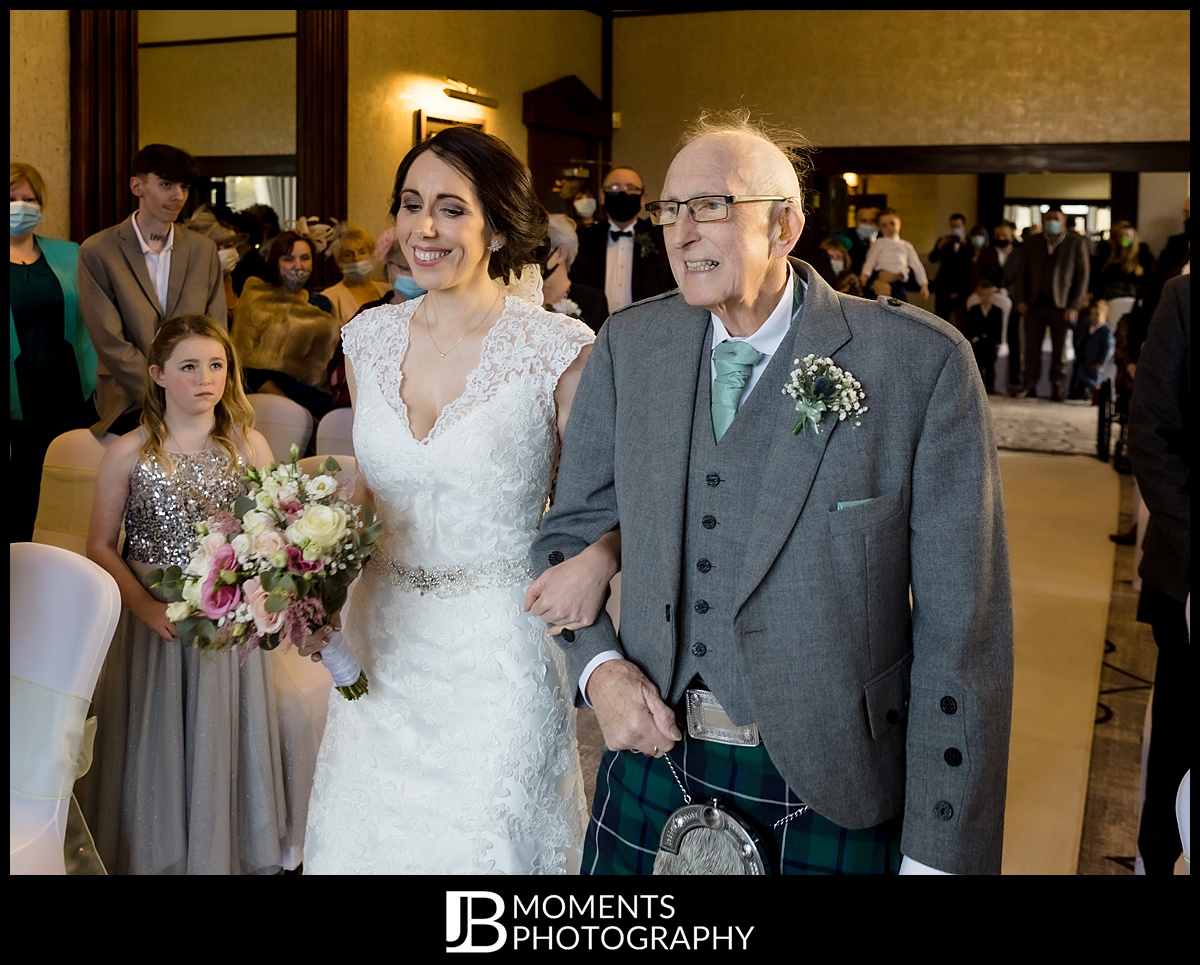 It was also his first time in a kilt and despite needing some help from the best man to get it on properly he looked very dapper. I don’t think it will be the last time he wears one!

Sarah was trying to hold in her happy tears from the moment she arrived. It was a beautiful ceremony and there were many glistening eyes in the audience. Sarah’s daughter had told me beforehand that she wasn’t the emotional type and that she wouldn’t cry. Imagine my surprise then when I saw this… 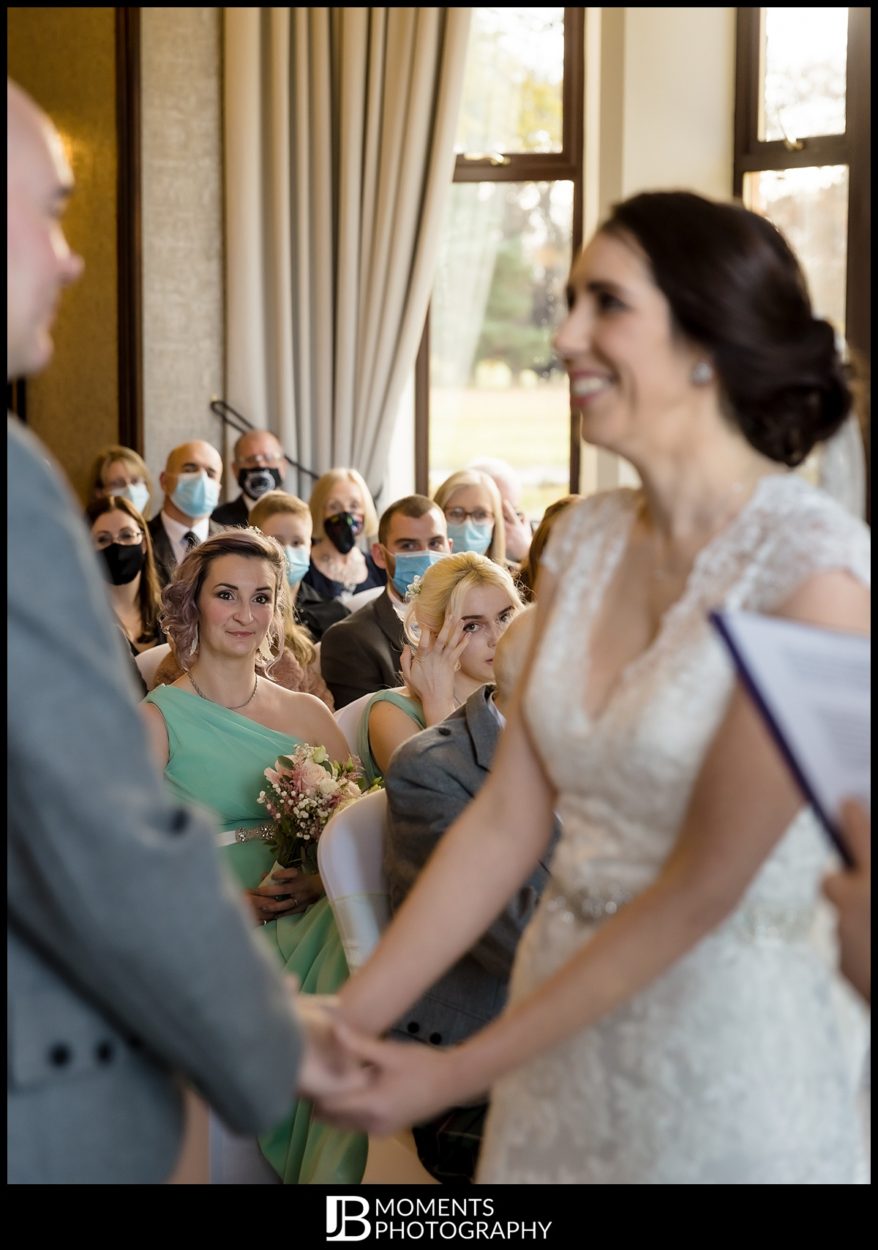 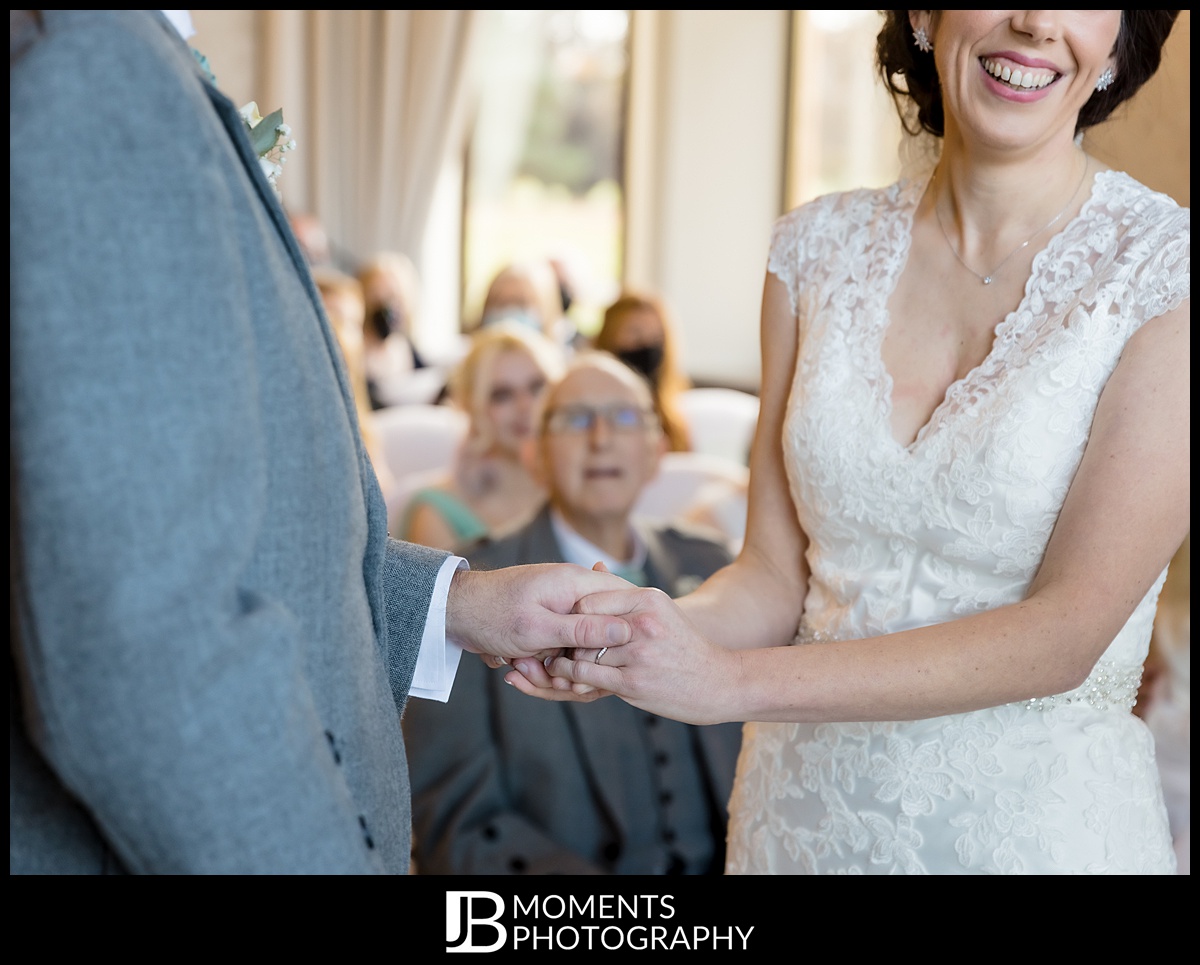 I love this image I captured just after their rings were exchanged. I was going for a tight crop of just Sarah and Ewen’s hands but I had to leave her beautiful smile in. Sarah didn’t stop smiling the whole day.

The Weather Gods were Smiling

It had been an atrocious  week leading up to the wedding day with heavy rain but from the moment the bride arrived the sun came out. Despite it being bitterly cold the autumn colours were beautiful so we got the whole wedding party outside for the obligatory wedding group shots and then took some of the smaller group shots inside. 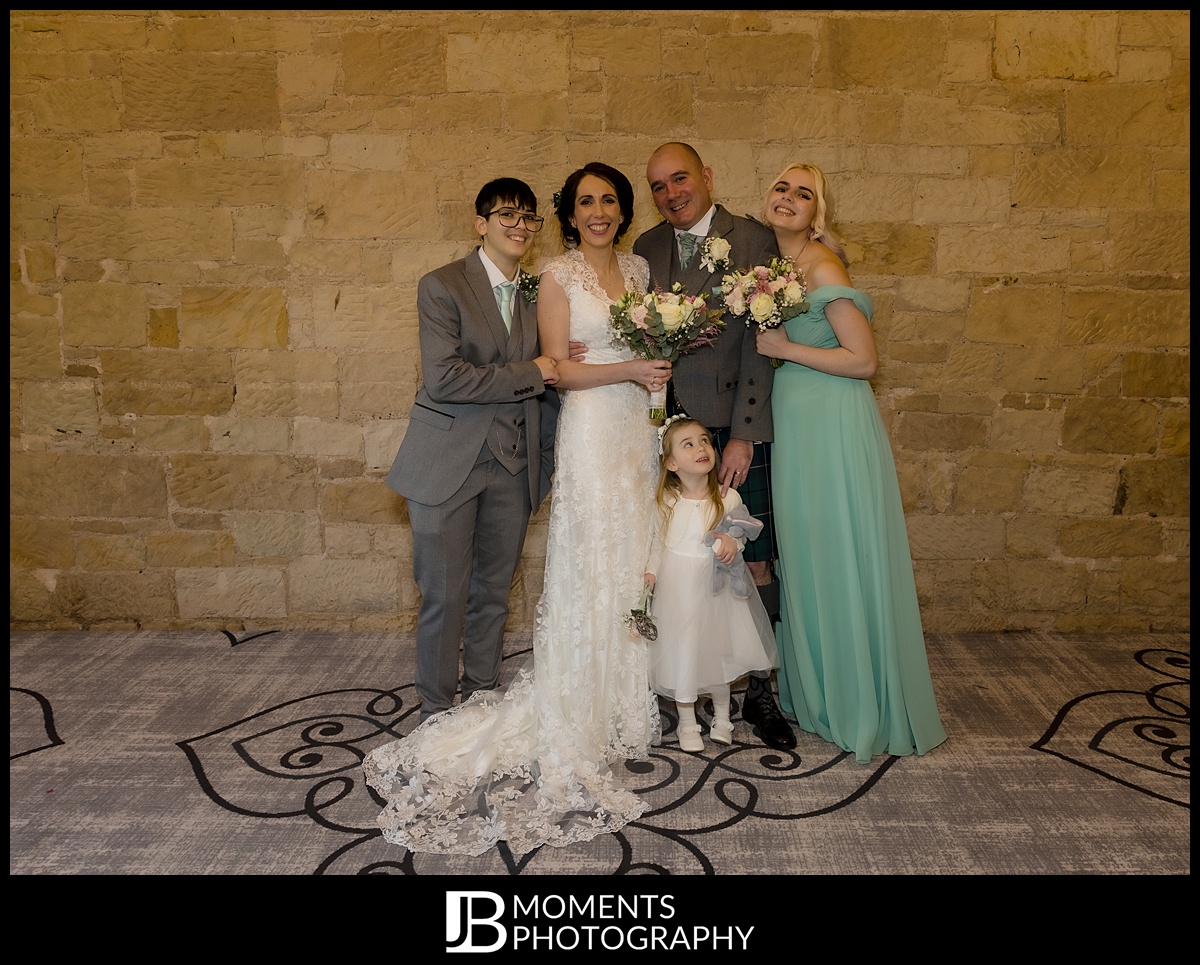 The bare walls in the house provided a lovely background and this image of Sarah and Ewen with their little daughter and Sarah’s son and daughter gives me all the feels. They all look so happy 🙂

But that autumn light was calling me and luckily Sarah and Ewen were game enough to brave it for some stunning couple images (even if I do say so myself!) 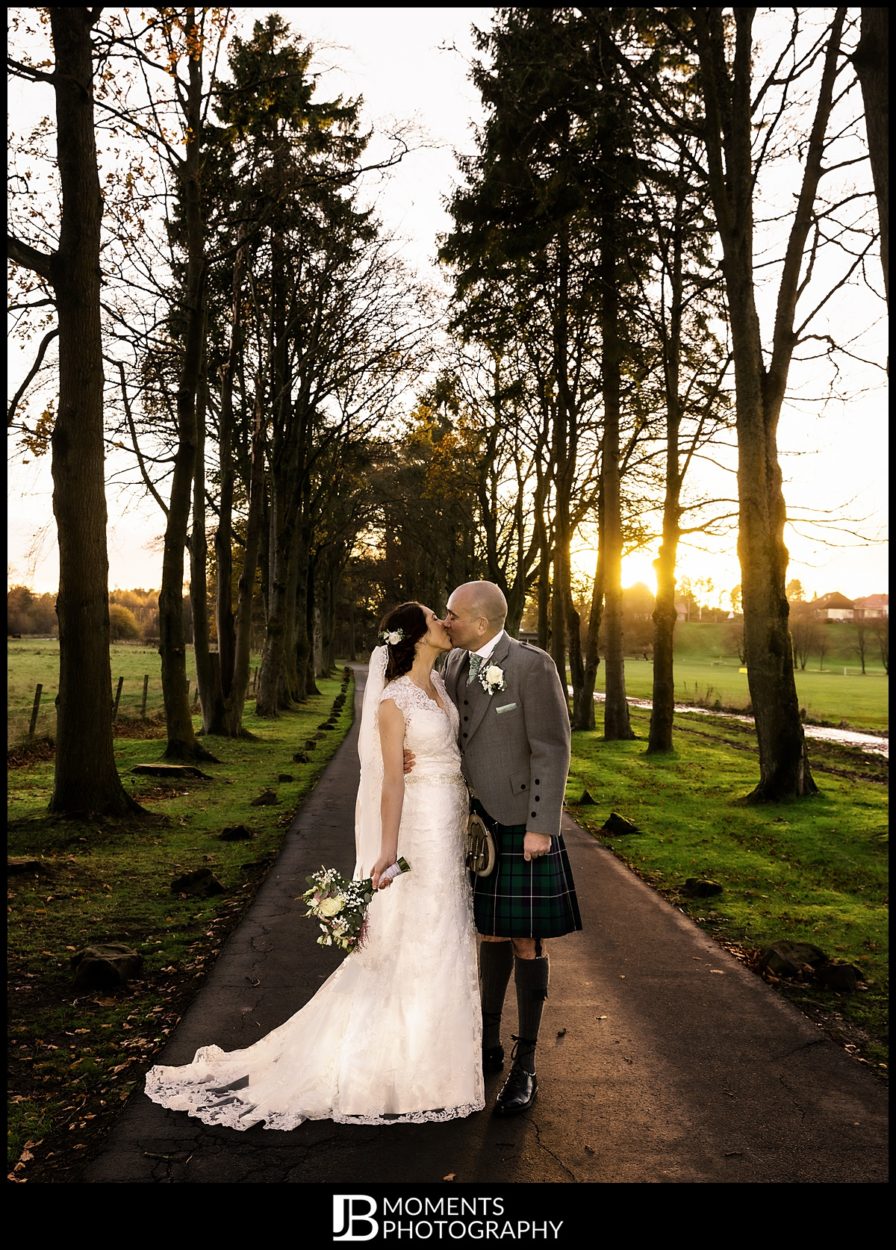 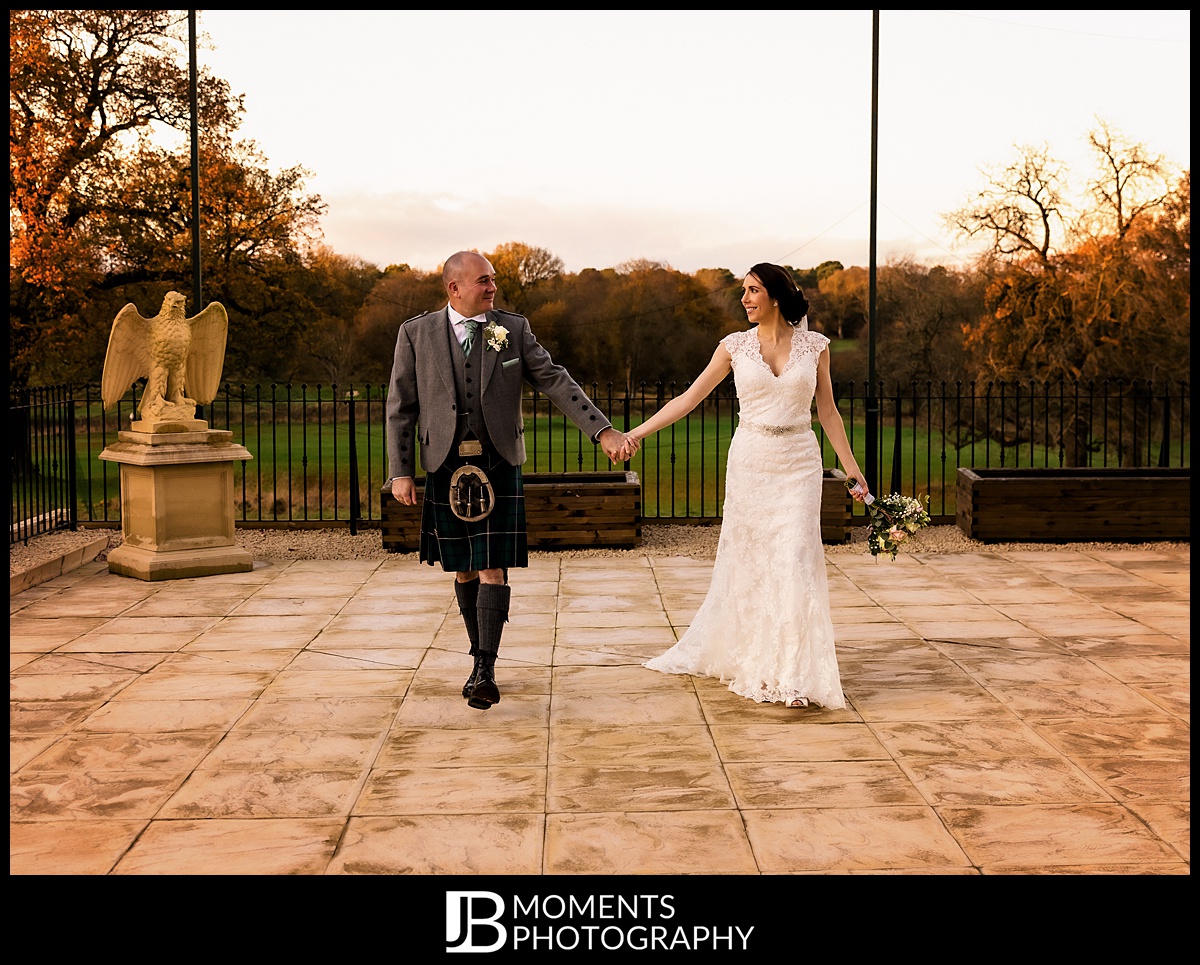 Sarah’s dress was amazing and had the most amazing back to it that I had to capture. 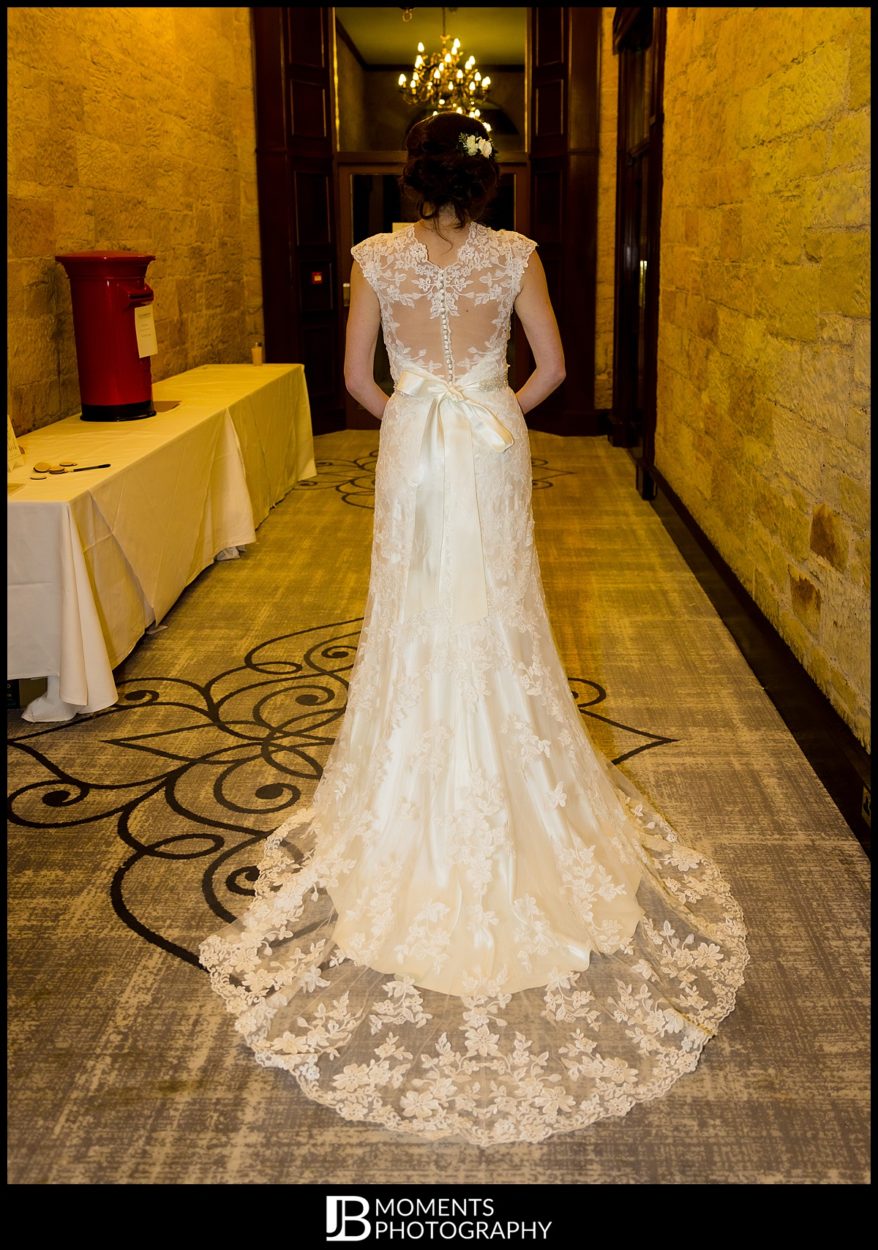 Readers of my blogs will know that at the last wedding I shot the Groom had baked and decorated the wedding cake. Well this time the Star-Baker crown went to the Groom’s Mother who made the cake. 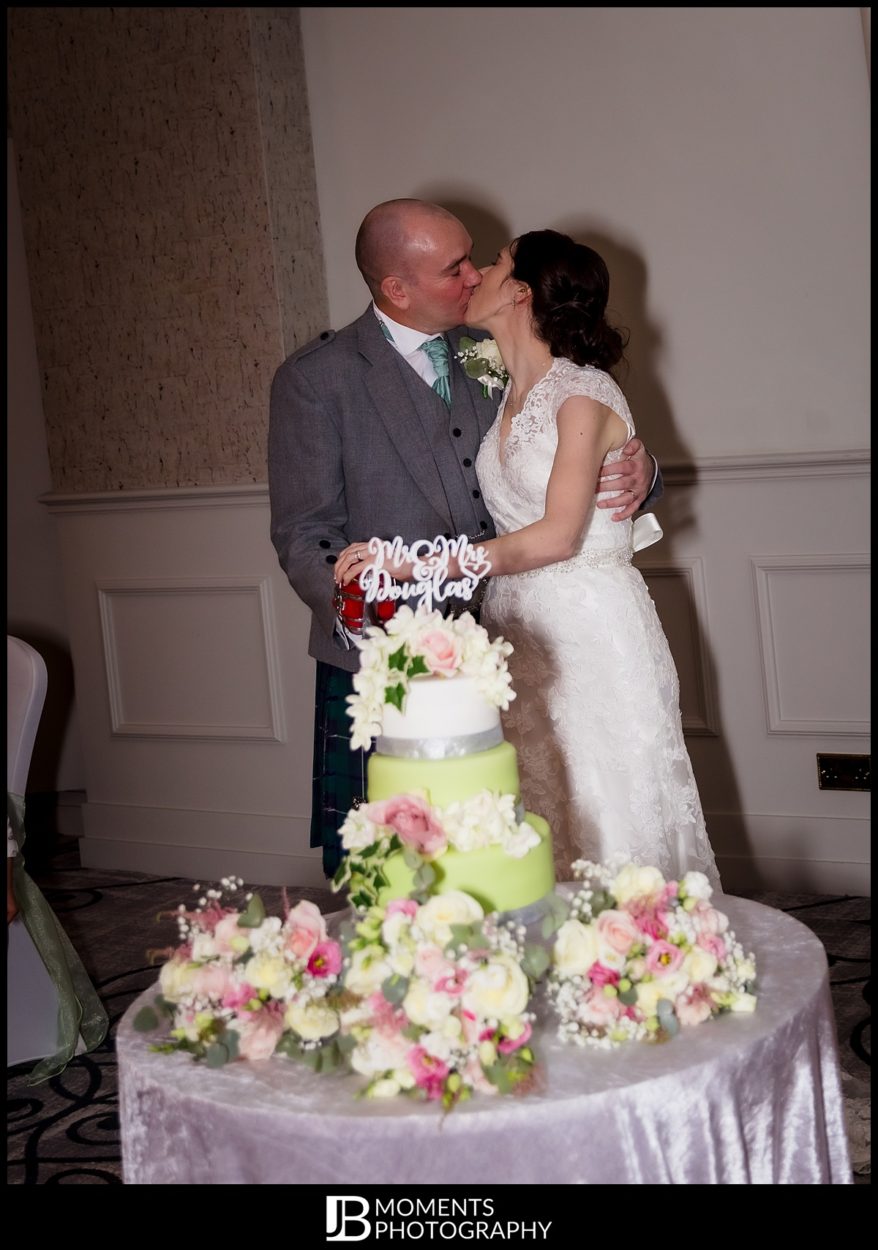 Dancing the Night Away

I love it when couples book me to capture the first dances. 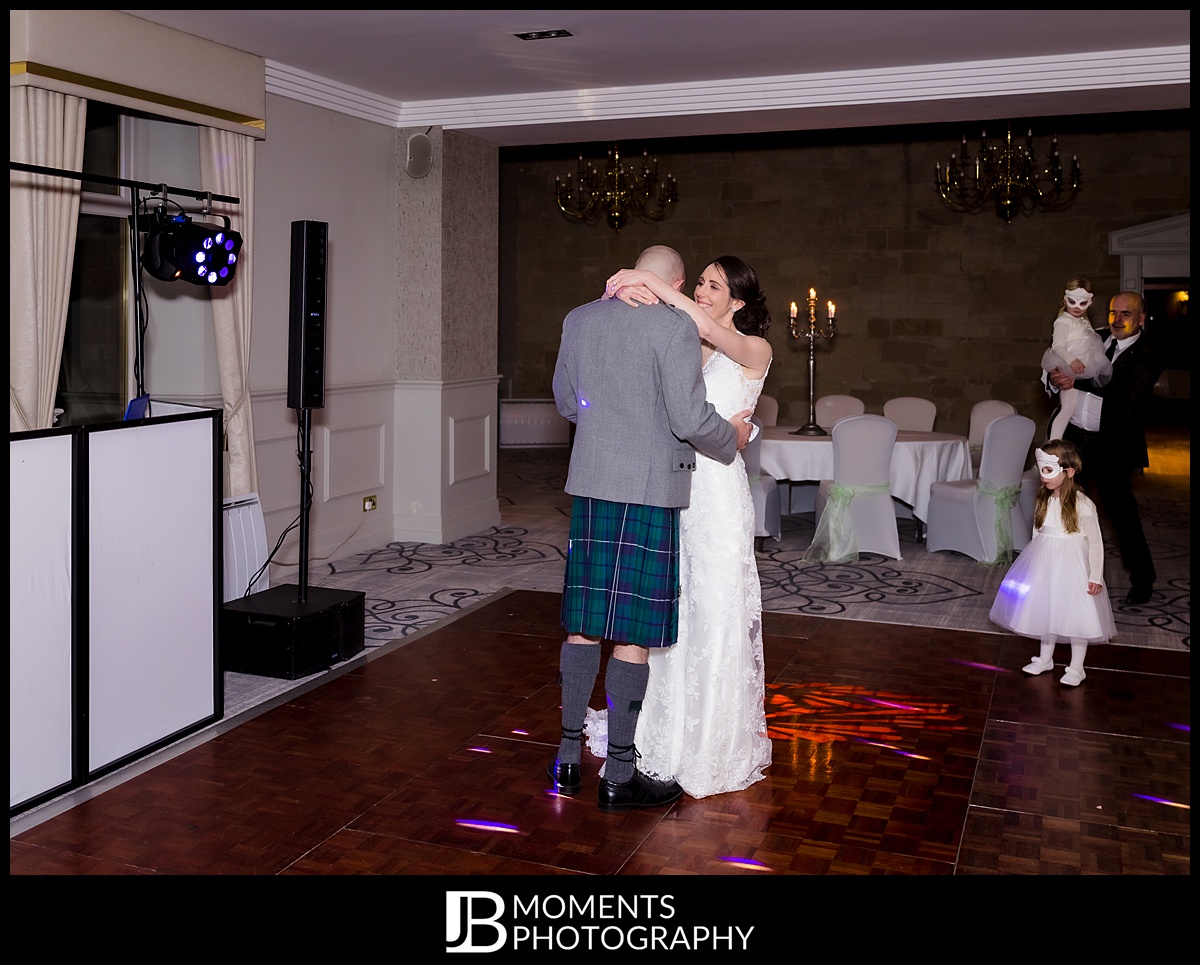 But it was the 2nd dance that moved me, the father daughter dance. 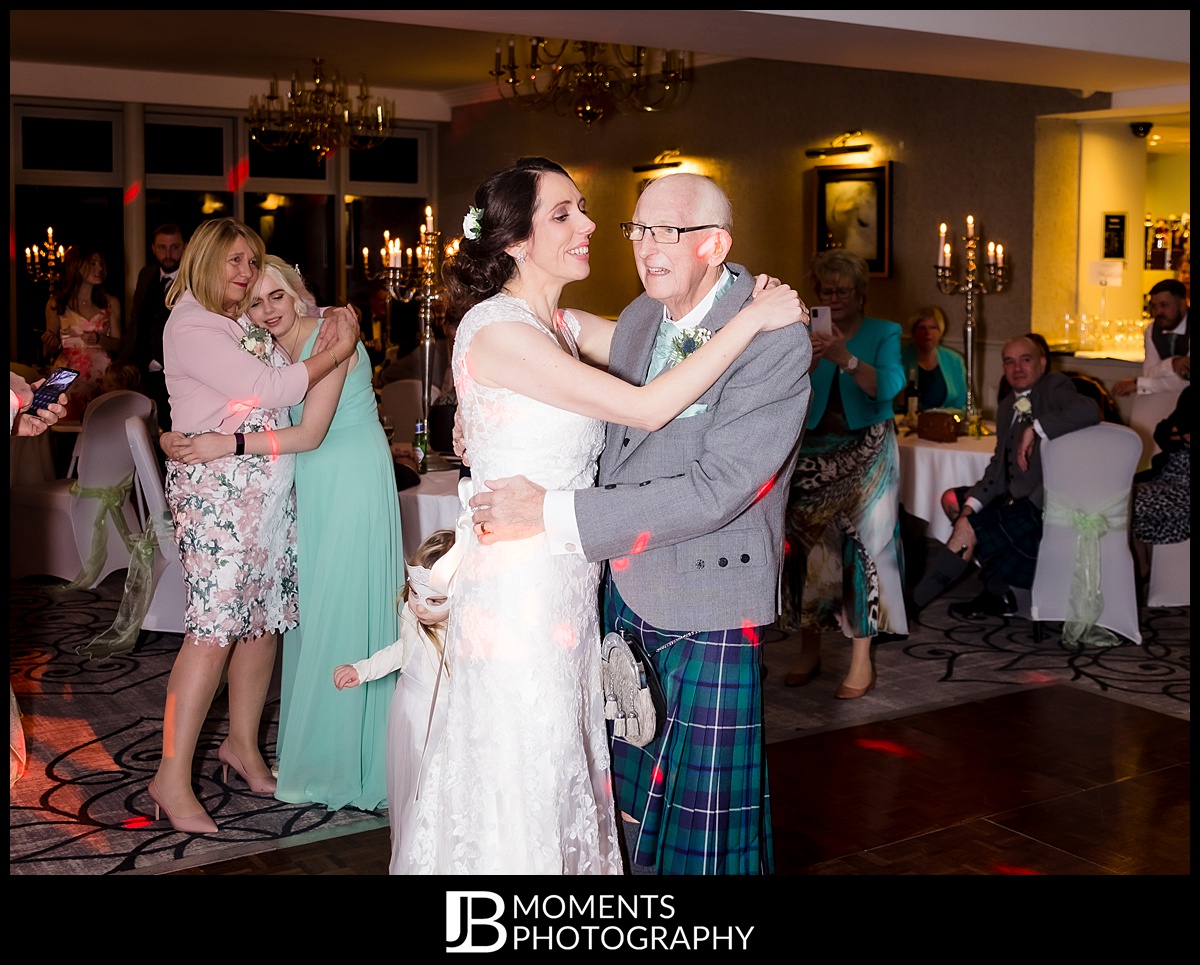 I love how happy Sarah and her Dad are and how her Mum and Daughter are cuddling watching them. It was a lovely moment.

I always tell my couples I’ll capture some shots of the dance floor filling up after the first dances and then slope away quietly to let them get on with partying the night away in peace.

Congratulations Mr and Mrs Douglas on a truly beautiful wedding.