I thought this quote was perfect when I saw it. Both the fantastic venue Denise and James chose to hold their wedding and because the couple are total foodies.

Denise and James met online on the 1st of December 2020 at 8:51 pm (I know, very precise, right?) and spoke every day after that. After a while, Denise planned to surprise James by meeting him at his work but he chose that day to leave early! They eventually met up later that night, went for a walk, and never looked back!

Whilst taking a staycation in Glasgow for James’ birthday they watched some of the latest Indiana Jones movie being filmed. Then as they sauntered back down Buchanan Street they were joking about getting married. Suddenly they weren’t joking anymore and they were engaged!!!

What a Wedding Venue

When Denise first contacted me and told me the venue I practically bit her hand off to take the booking. And that was before I realised what a genuinely lovely couple they were and that they were also crazy French Bulldog parents! It was meant to be!

The Japanese Gardens, near Dollar, is a hidden gem of a place that Mr JB and I discovered during one of the many lockdowns. Created in 1908 by the formidable Ella Christie, a true pioneer of her time. As a photographer, it is an absolute dream to capture, and having only taken headshots and personal images there I was beyond excited to capture a wedding in the gardens. 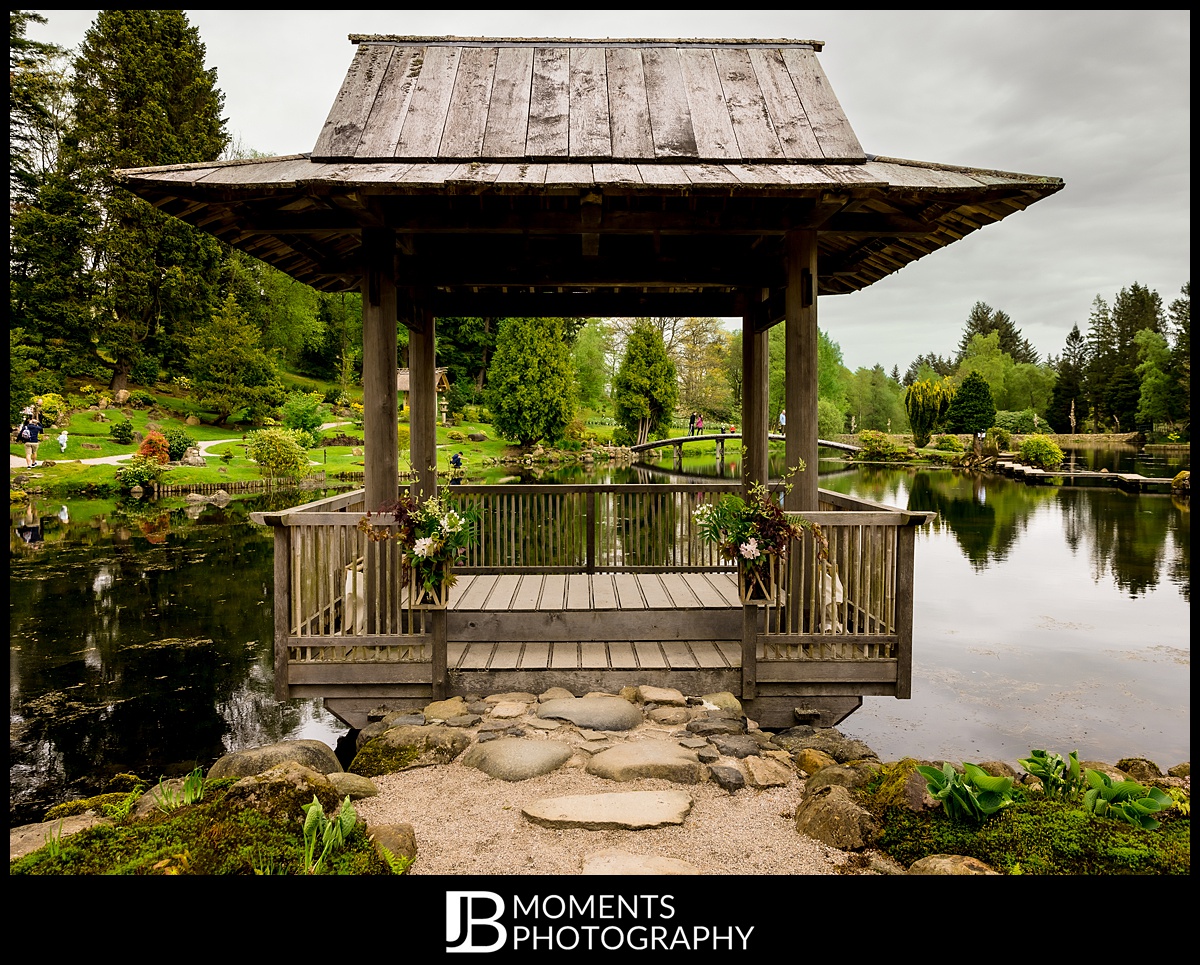 The azumaya pictured above is where the couple gets married. The flowers at the entrance are picked and arranged by the garden volunteers for the wedding.

Outside! In Scotland! In May!

I took the above picture when I arrived at the venue and you can see how grey the sky is. Then it started to drizzle, my worst fears confirmed for my bride and groom and their guests (who would be out in the open to watch the ceremony)!

But I should have kept the faith. Like my super chill bride and groom because the drizzle stopped. Hurrah! Then before the bridal party arrived the clouds parted and blue skies appeared. The wedding gods were watching. 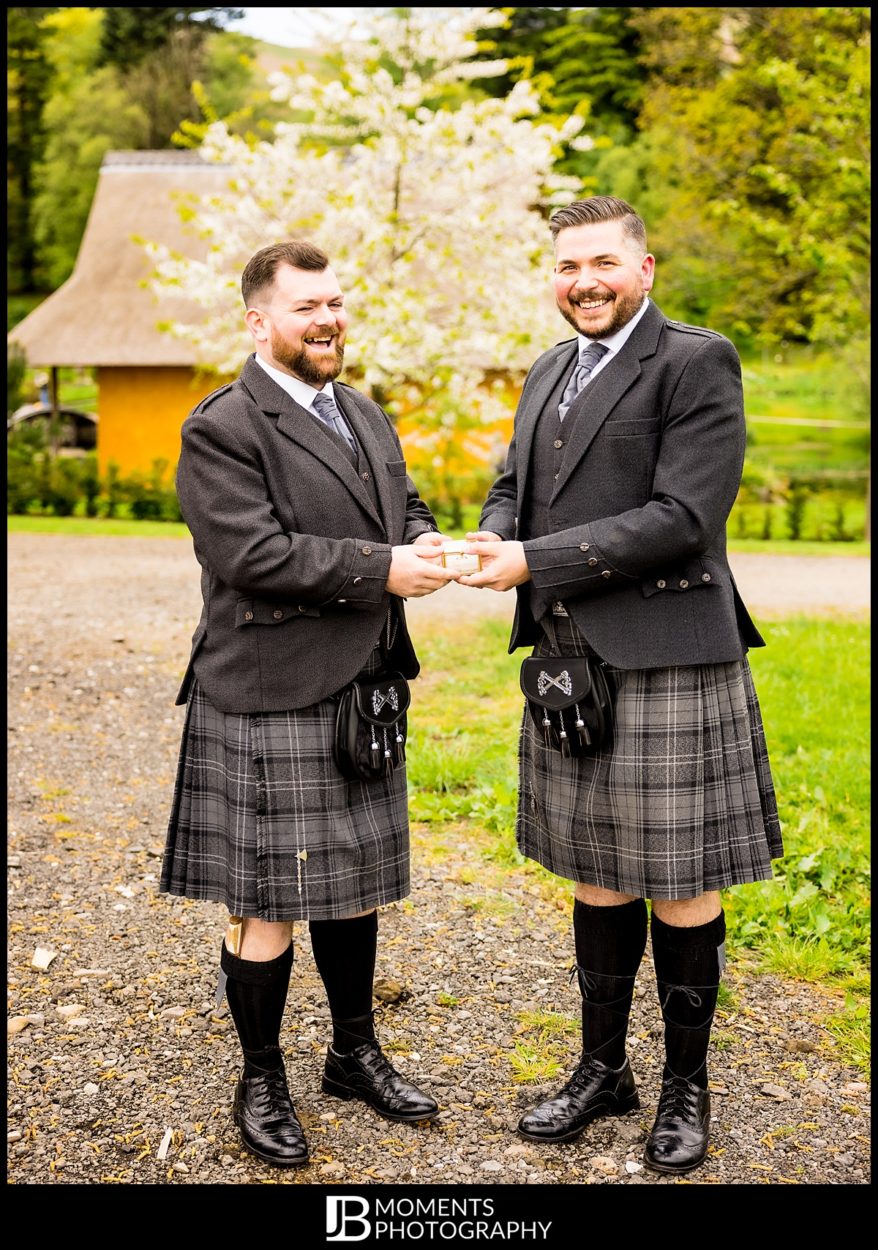 The groom and his best man may have forgotten their buttonholes but they had the rings and that’s the important thing!

I mean, come on, can’t you feel the love? 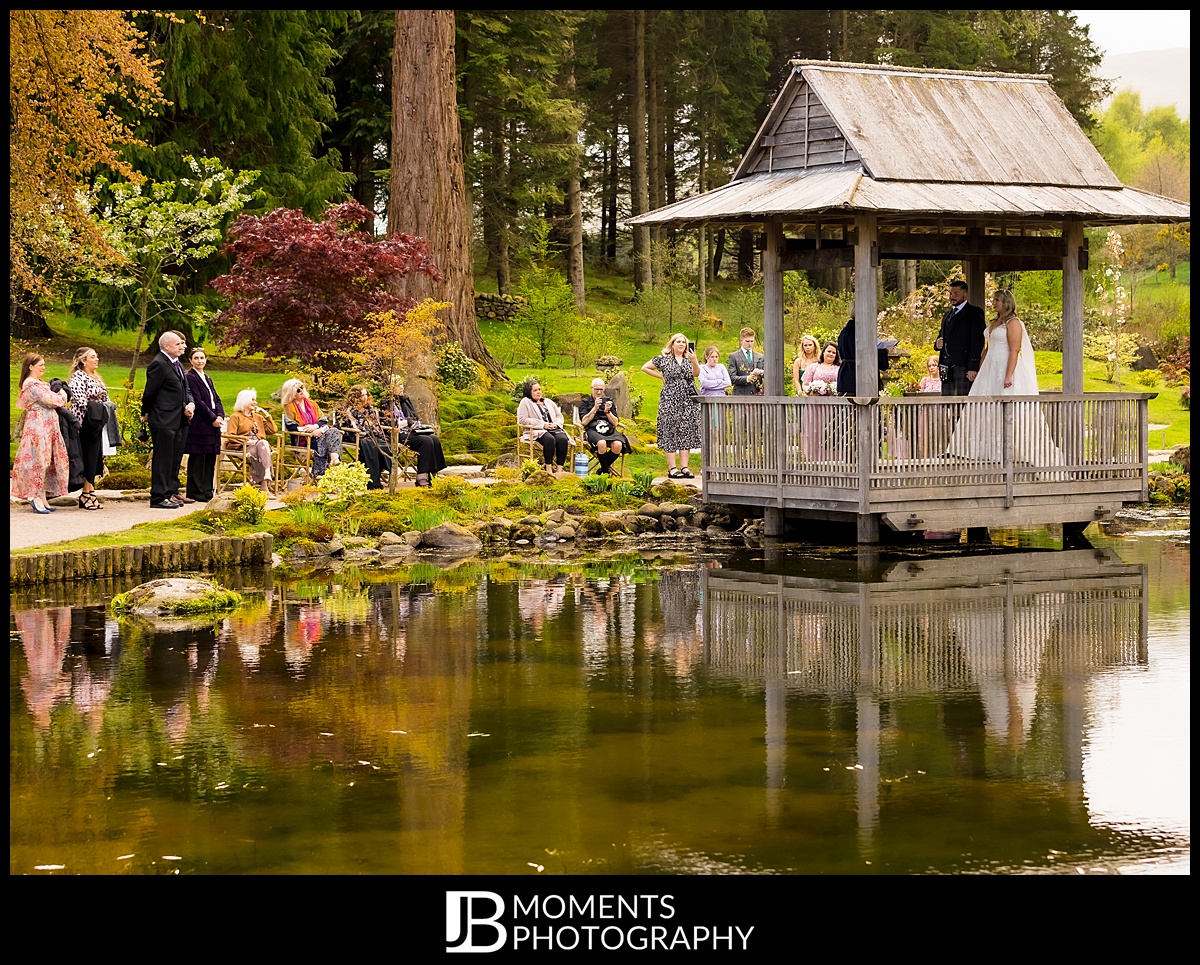 Witnessed by their very closest family and friends.

Then it was off to the Japanese Tea Room structure to sign the marriage certificate. 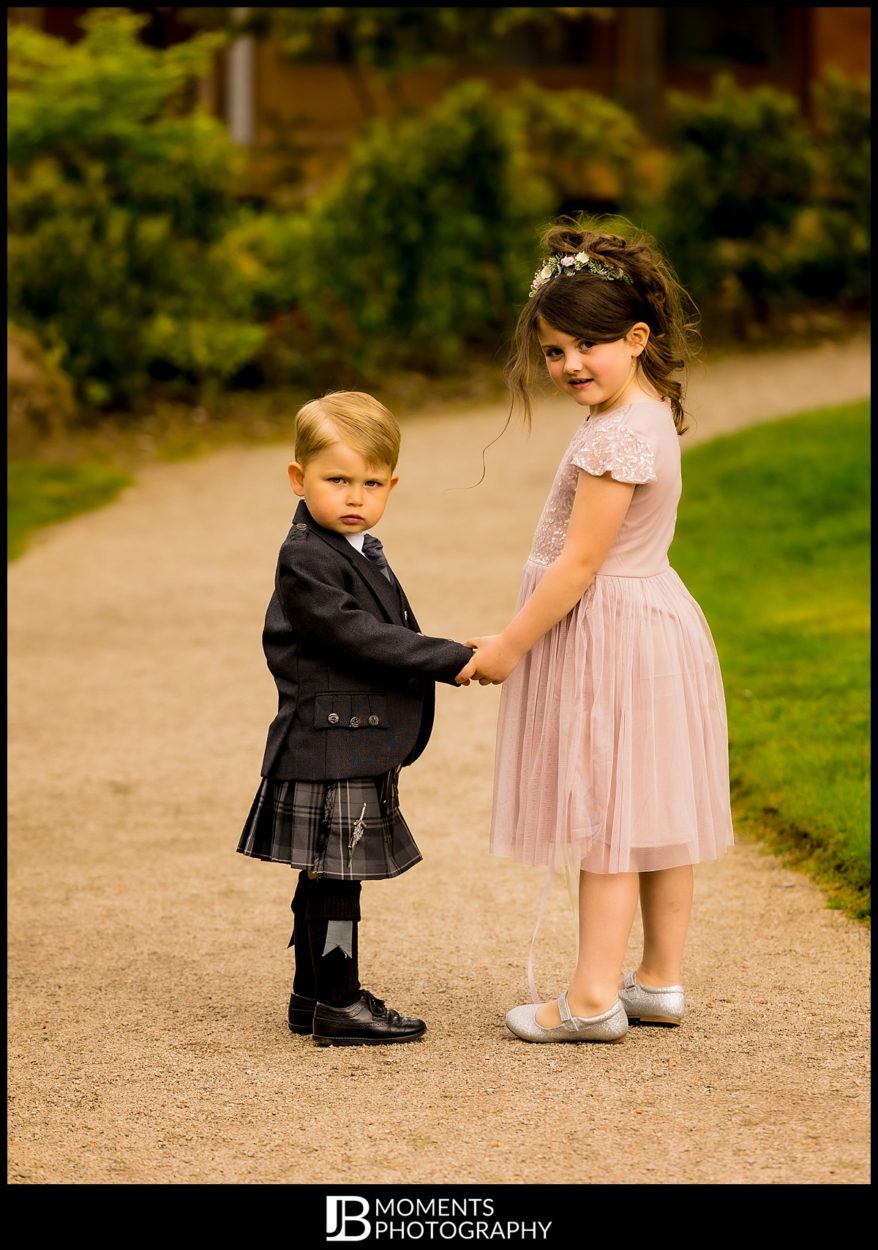 But not before these two littles tried to steal the show by being unbelievably cute. James’ son and the flower girl who was the daughter of the best man and the chief bridesmaid. 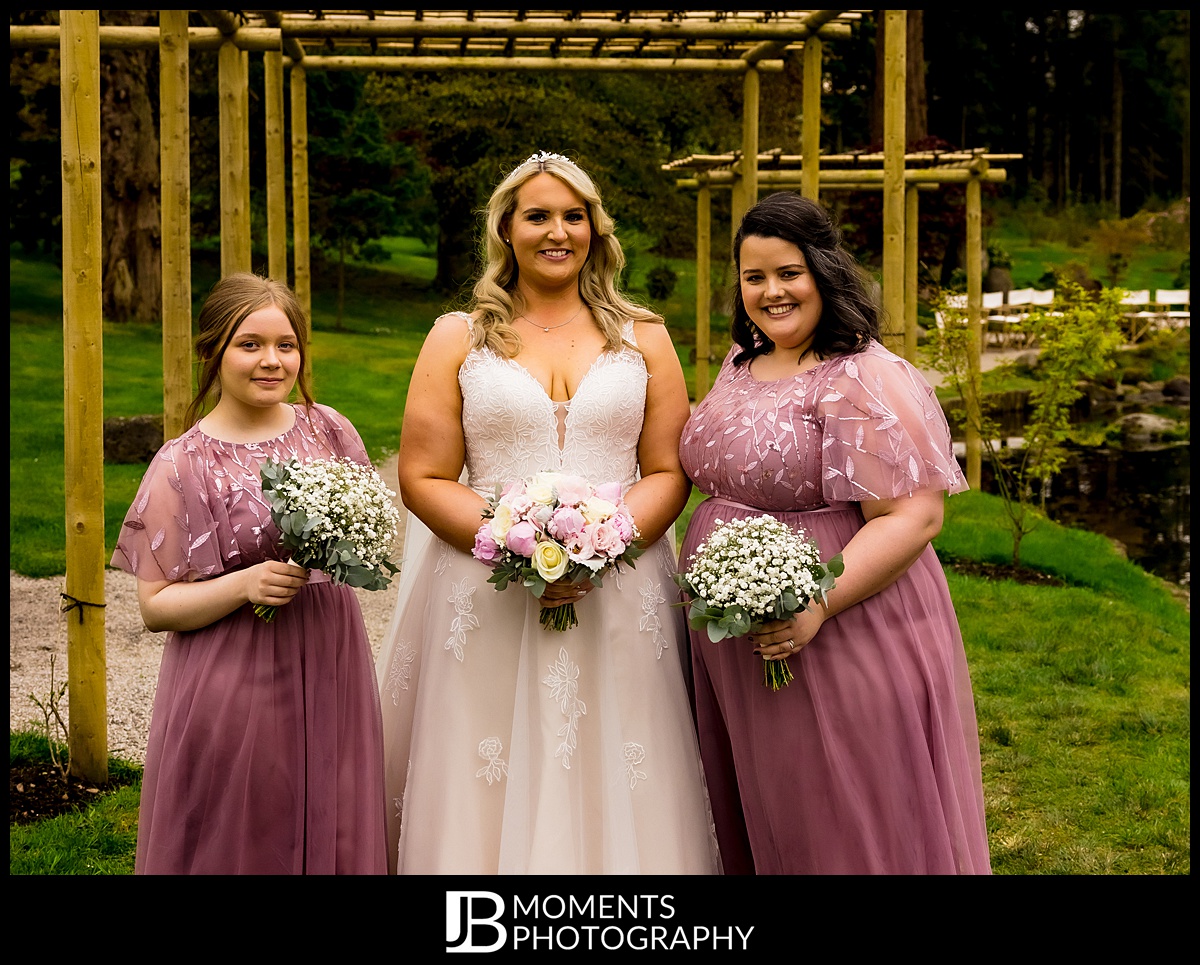 Denise’s other bridesmaid was James’ daughter. The dresses all had botanical details to echo the surroundings and the beautiful flowers (including peonies, my fave) were created by The Flower Studio.

My USP is usually to keep Bride and Groom photos informal and quick so that my couple can get some beautiful images and get back to their guests and their party. I kept the informal part but with a venue like this, I had a hard job giving my couple back. At every turn was another gorgeous photo opportunity. 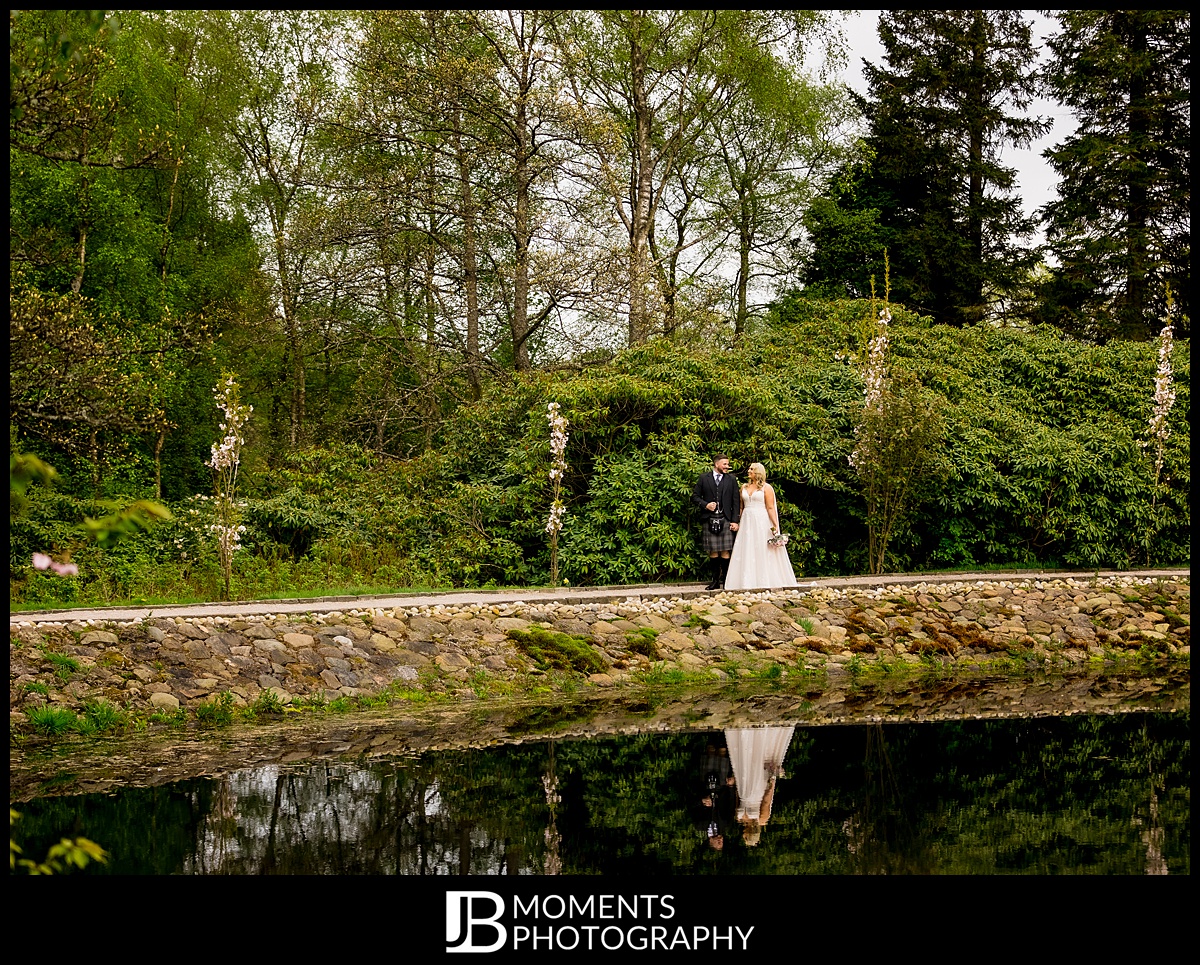 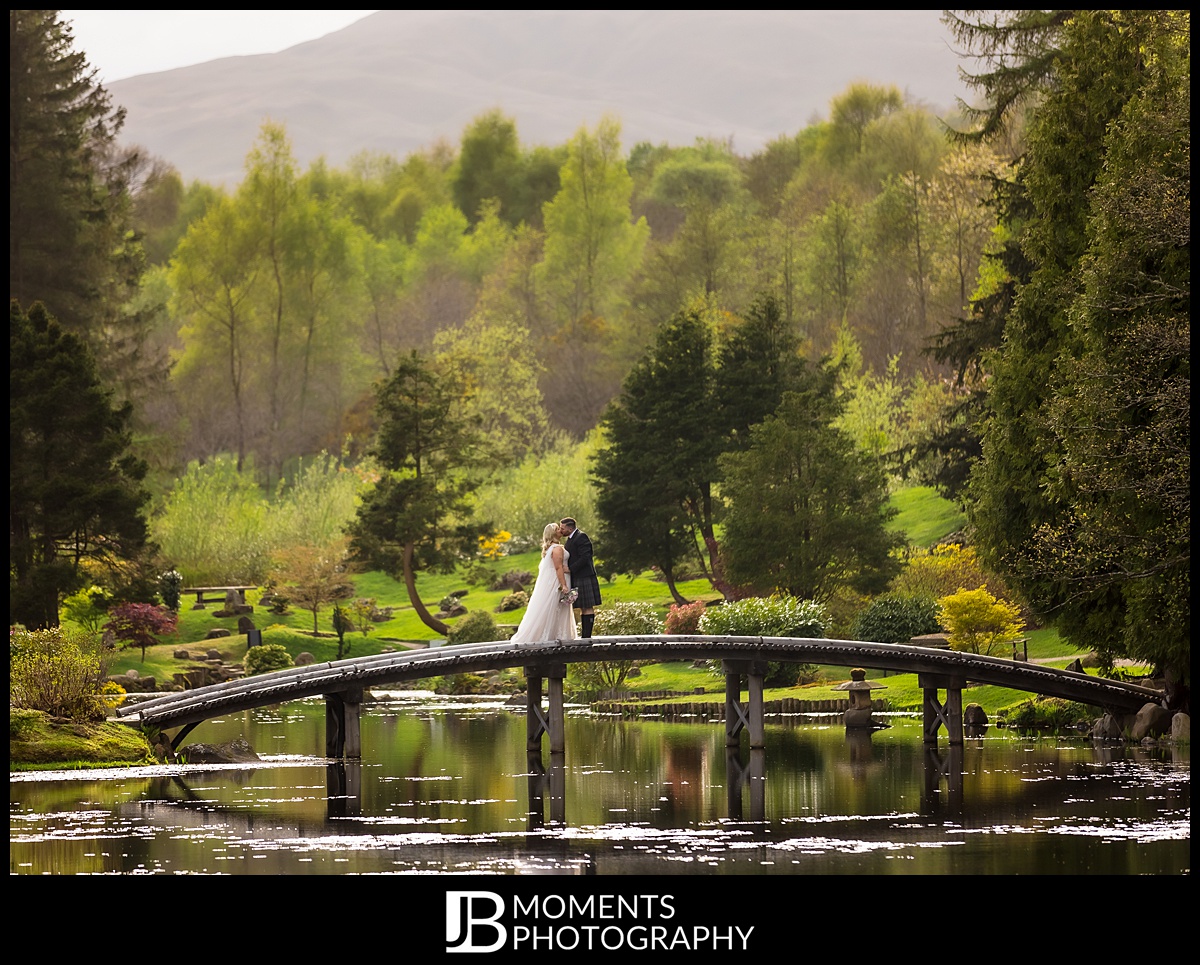 From reflections in the still pond to bridges, lush foliage, and interesting structures I was spoilt for choice. 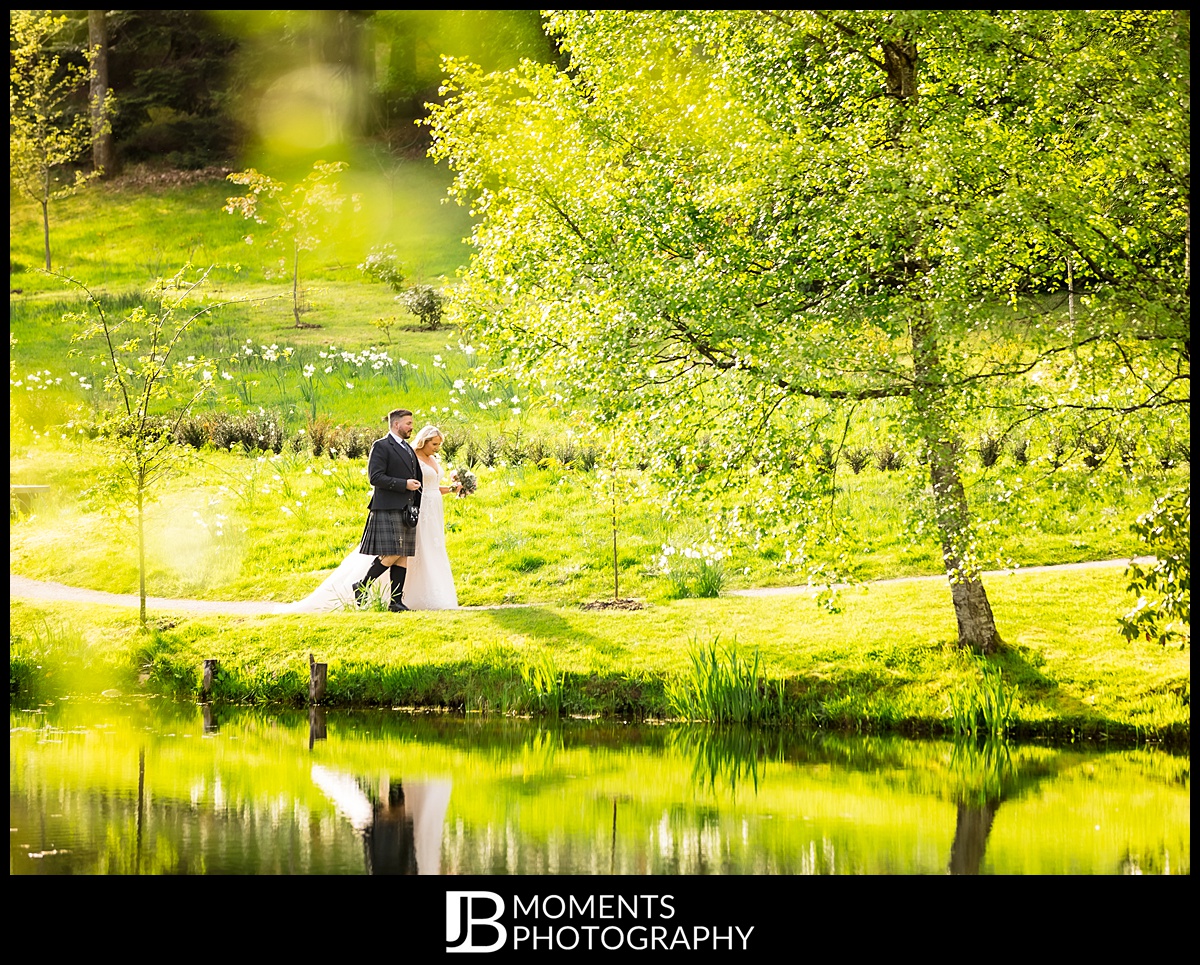 Including some of my favourite images taken when my couple didn’t realise I was capturing them.

All The Little Details

Did I mention my couple were foodies? They had arranged a gourmet BBQ for their guests and I took that opportunity to capture some of the details from their wedding day. 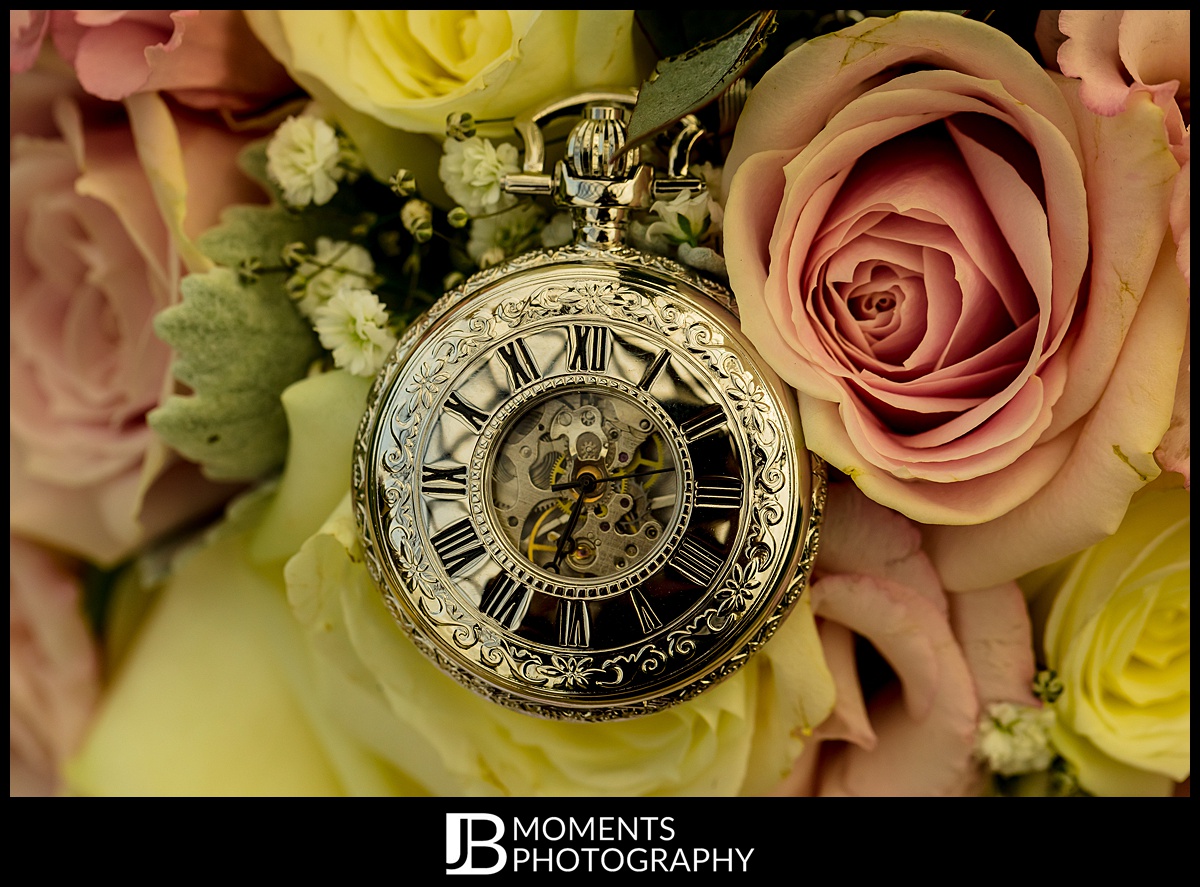 Like the pocket watch, Denise had gifted James for the wedding. 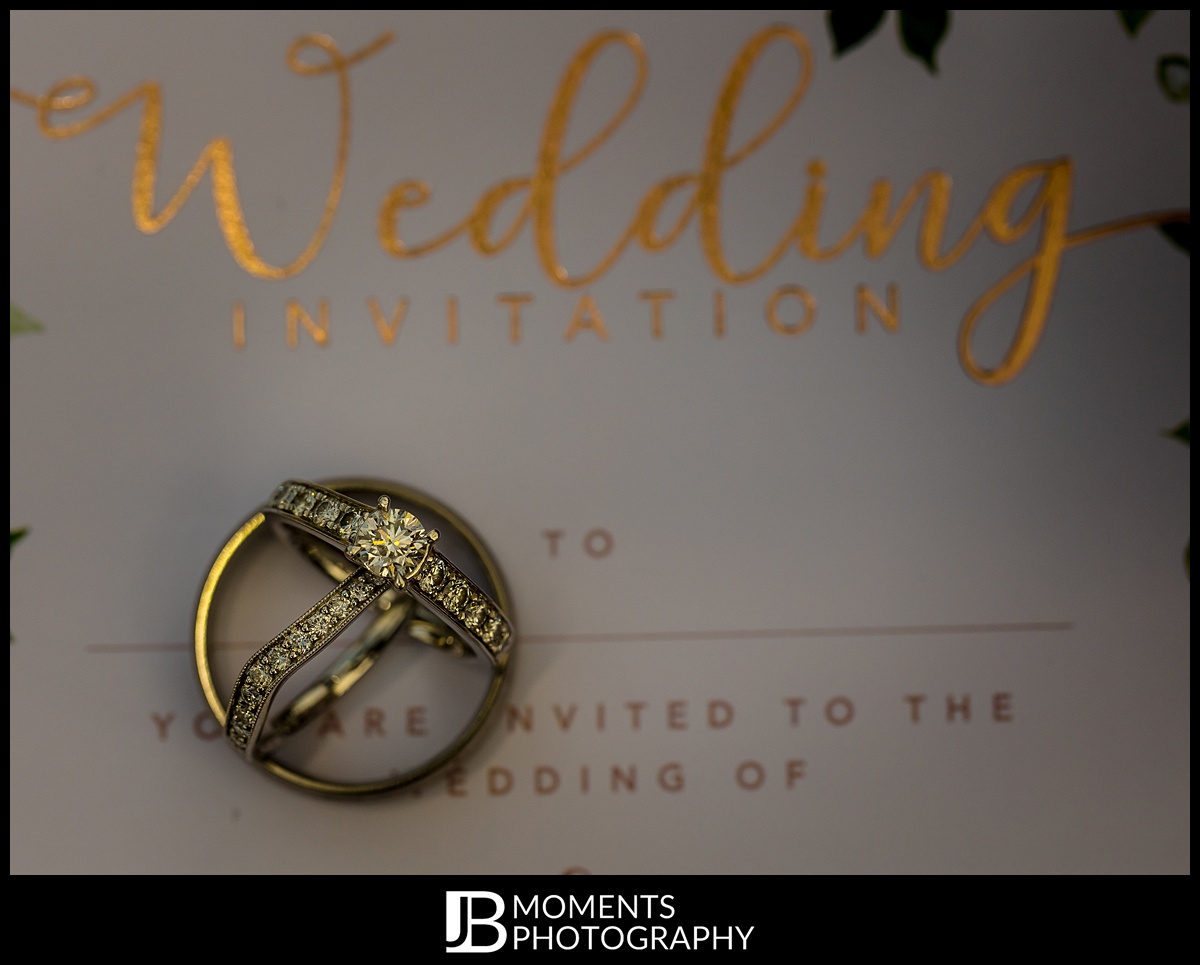 And their foliage inspired wedding stationery with their stunning rings.

Getting Our Geek On

I could tell there was a really close bond between my couple and their best man and maid of honour and it was lovely to witness. It was getting close to the end of the evening, the light was beautiful and I asked if I could shoot my couple on the bridge (again) with the best man and MoH holding my flashguns for a kiss of light (because I’d forgotten my stands. Doh!).

This inspired the Groom and best man to request a lightsaber-inspired fight scene on the bridge. Who am I to deny this bromance? 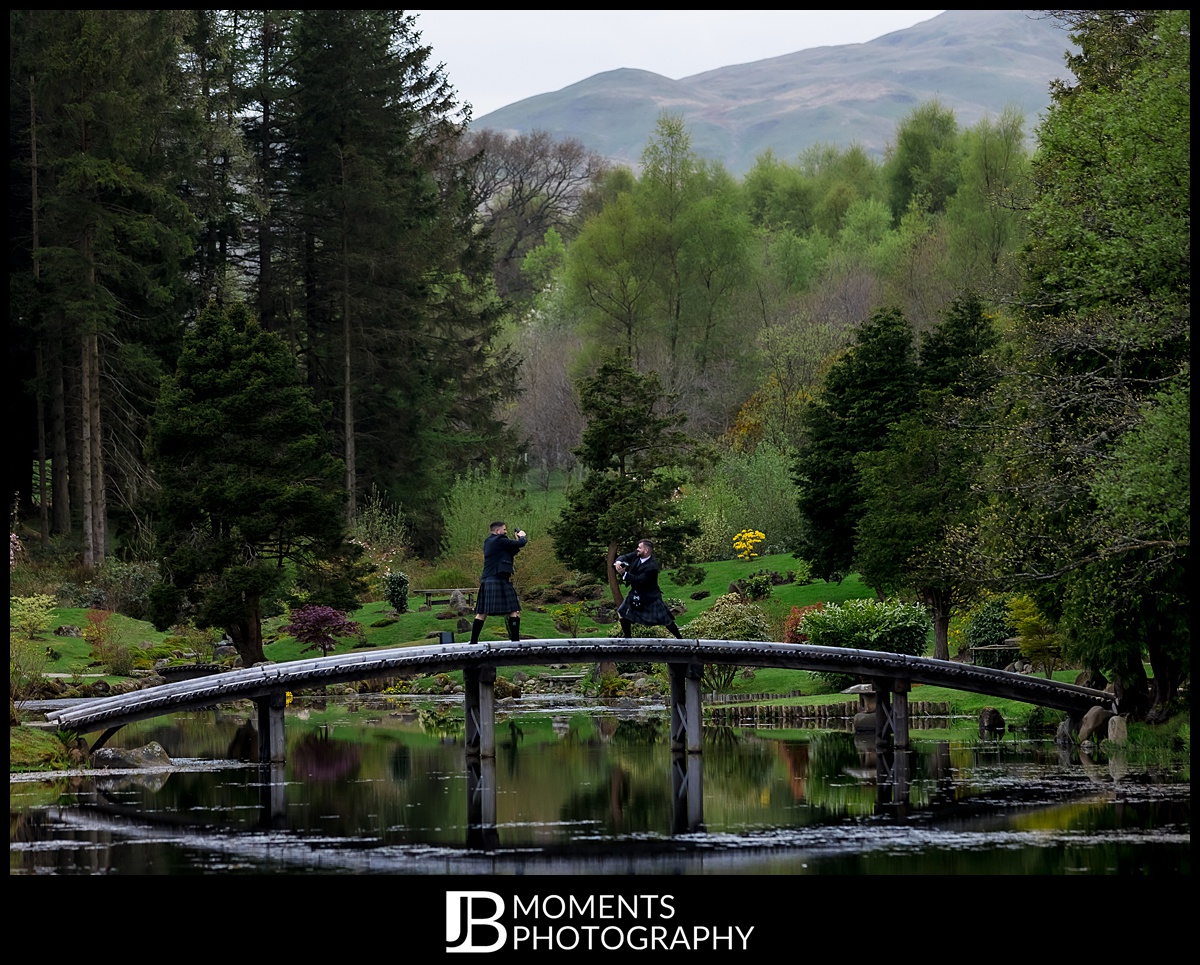 So here is them ahem…’fighting’ on the bridge, much to the amusement of their guests in the Tea Room. 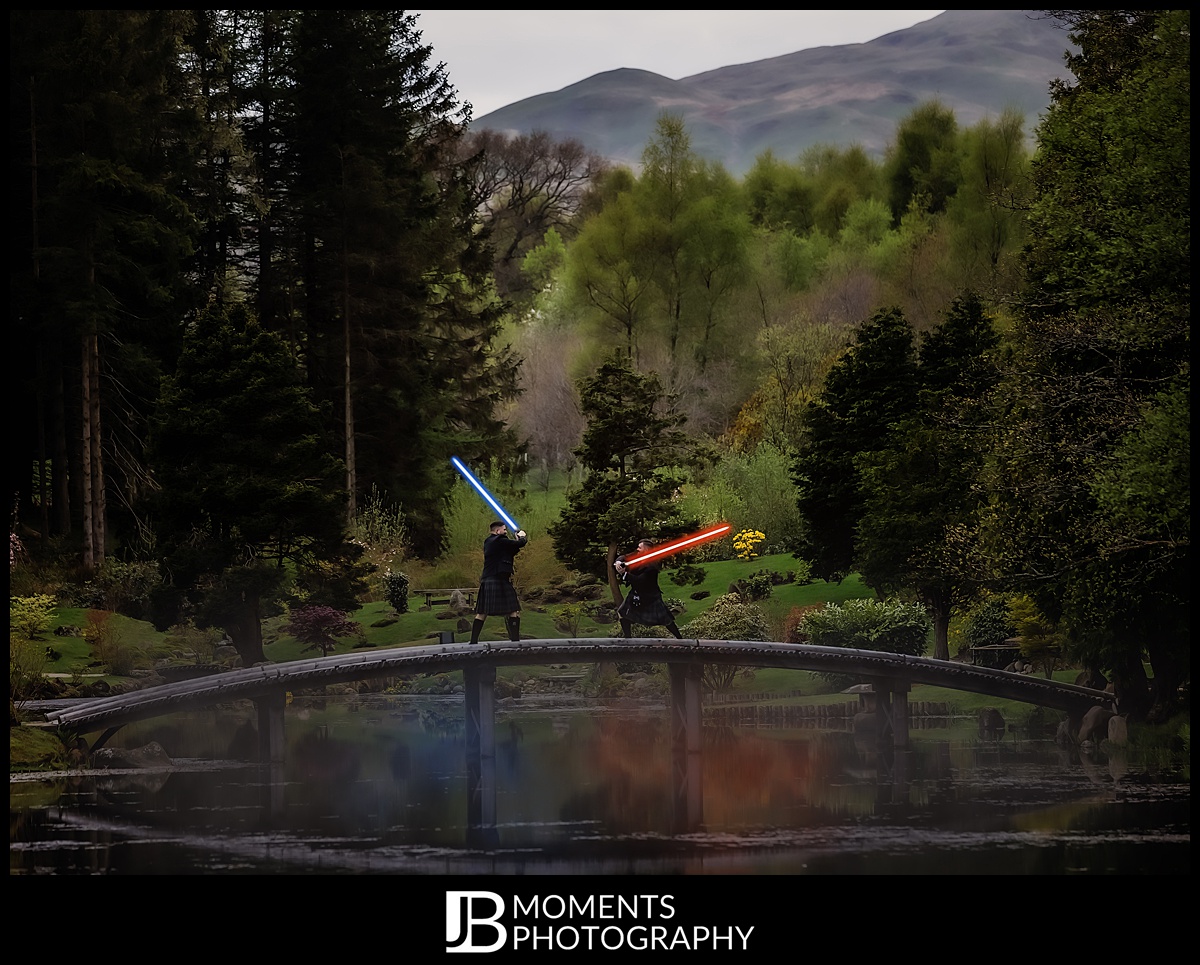 And here’s how it ended up. I mean…kilts, lightsabers, Japanese horticulture…there are some fusions that just work!

And just like that my day with this lovely couple and their nearest and dearest was over. But not before Denise insisted I took a slice of their delicious wedding cake and one of the guest favours. 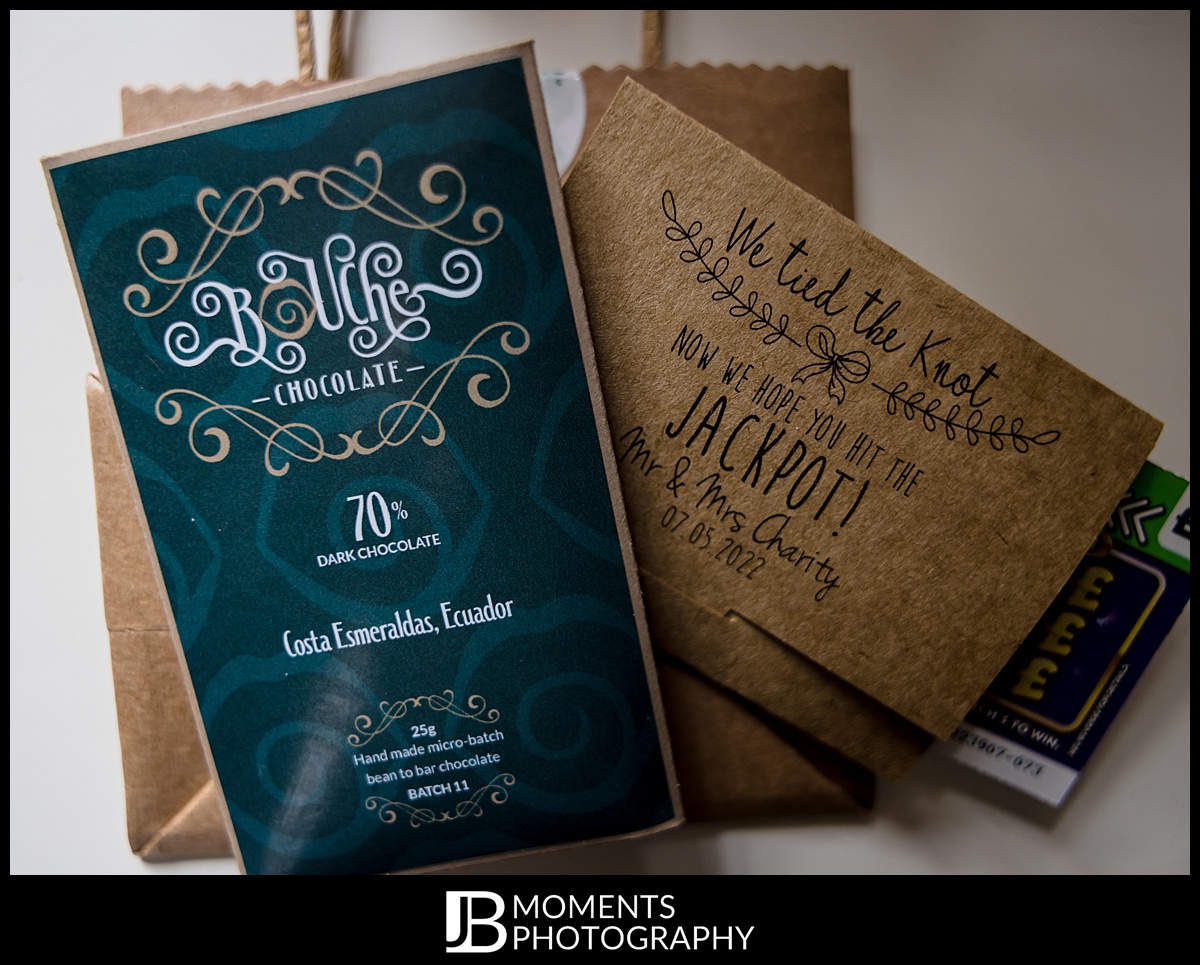 As a testament to this couple’s wish to use local suppliers and support small businesses, it was an artisan chocolate bar from Bouche Chocolate which I can highly recommend having scoffed! And a scratch card that I won £2 on. Result!

Congratulations Mr & Mrs Charity and here’s to your… 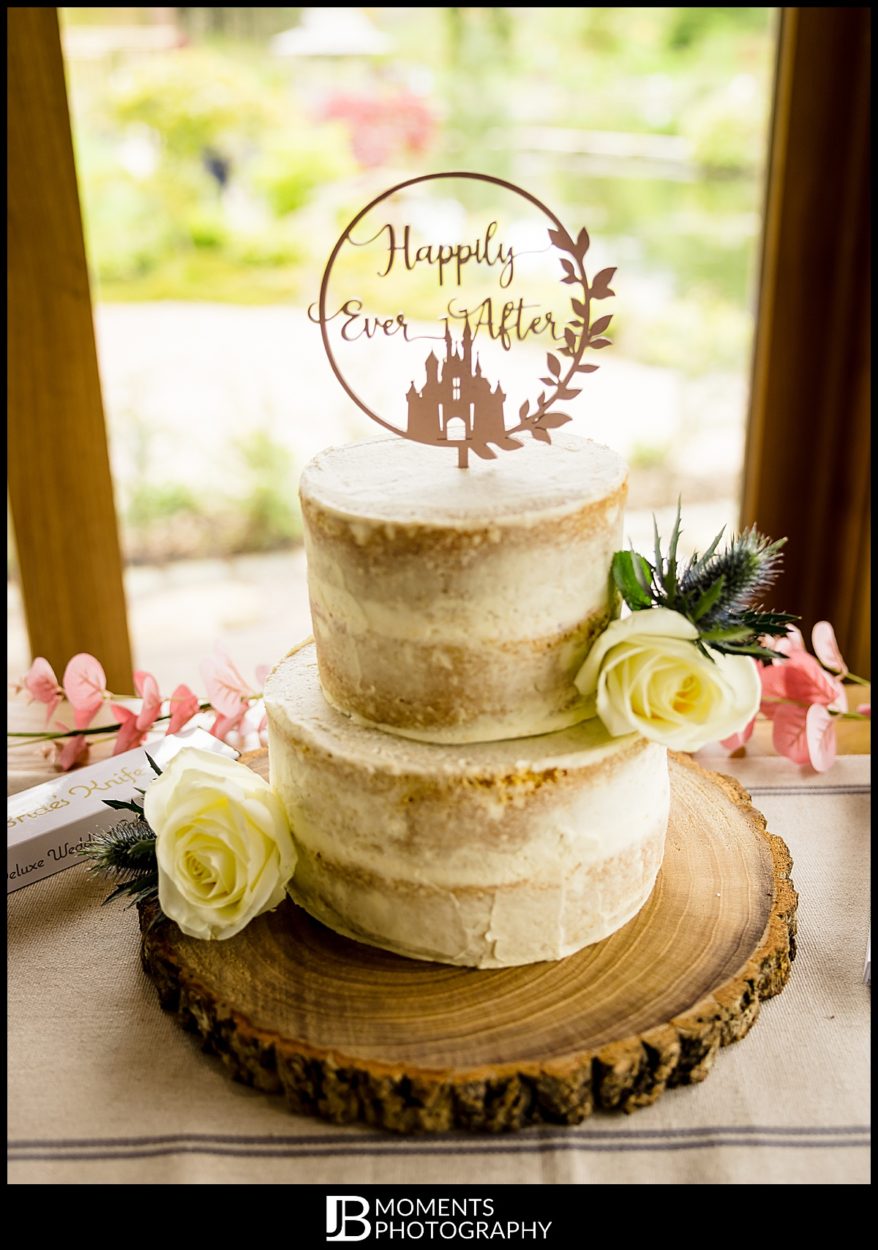