My sheep puns are so baaaaaaa-d (sorry, not sorry!) but I couldn’t resist. You see when Audrey Lamb and her Clydesdale Horses met Johnny and his sheep at the Royal Highland Show it was a match made in farming community heaven. So much so that Johnny proposed at the Highland Show a few years later. Audrey said, ‘Baby don’t herd me’. No, she didn’t – I’m going to stop horsing around now. Okay, I really am finished now!

Last wedding of the year

On the 30th December 2019, literally with one day of the year left to spare this wonderful couple tied the knot in the beautiful opulence of Airth Castle. I was delighted to have been chosen to capture the day for them as it was a day full of love and laughter with all their friends and family around them.

What an old romantic

The night before the wedding Johnny presented Audrey with a gift to wear on the day. A stunning pair of diamond earrings. 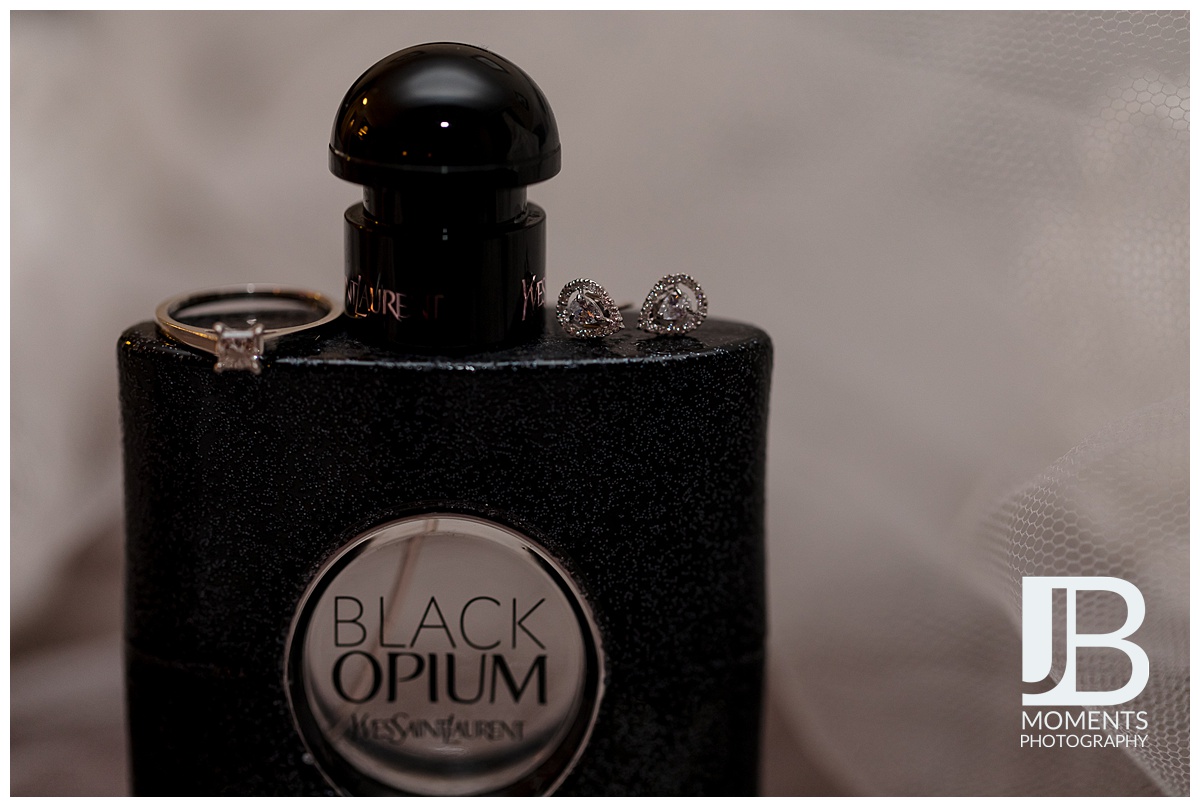 They were a lovely ‘something new’. Her something ‘old’ was her mum’s amazing veil. 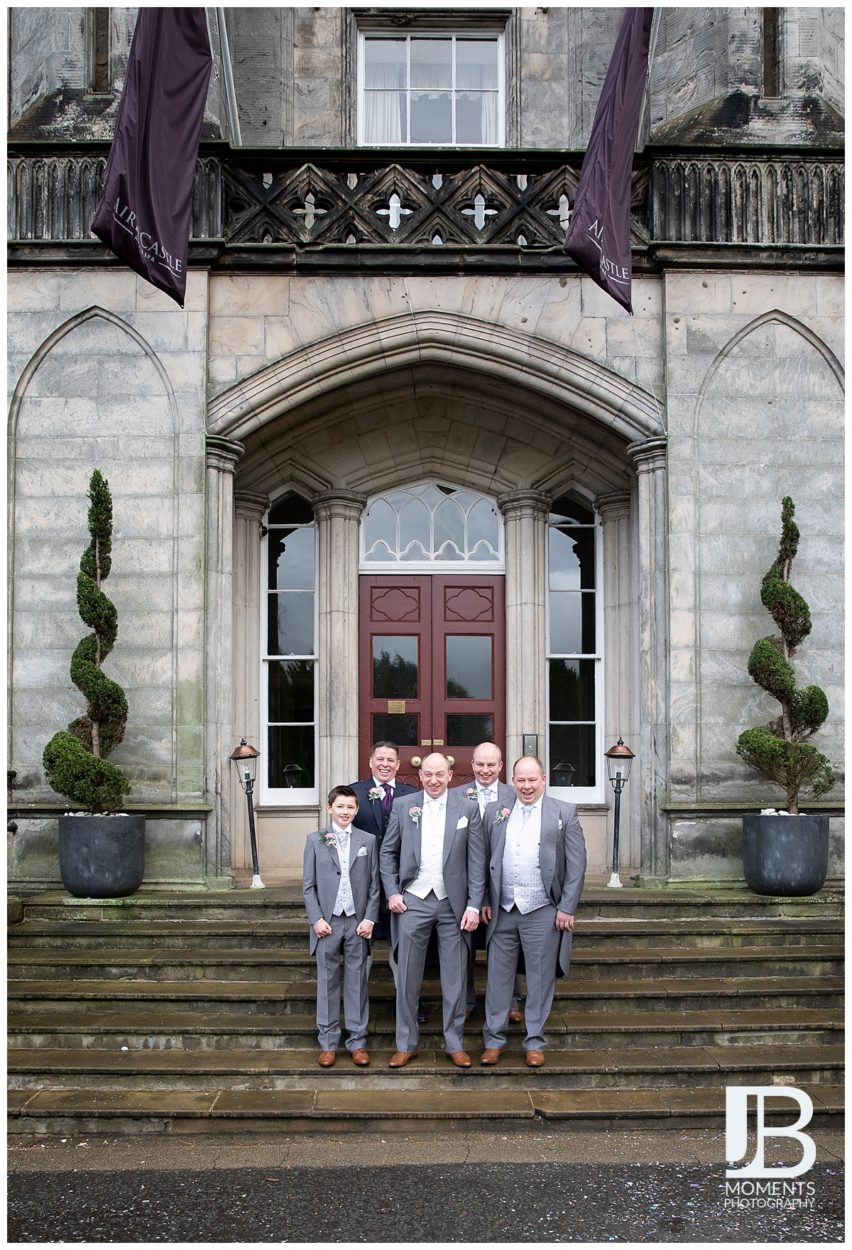 Johnny and his family are from Ireland and opted for waistcoats and tails as their wedding attire. His brother and his nephew were his best men whilst his other brother and friend were ushers. The one Scot did his bit and wore a kilt! Don’t they all look handsome?

The weather miraculously stayed dry when we needed it to. Whilst it threatened to rain most of the day it didn’t and stayed uncharacteristically mild for the time of year. Whilst I would have loved to take wedding images in the crisp white snow. the reality would have been more slushy and bad weather may have stopped guests from getting there.

The ceremony was held in the old castle in a gorgeous high ceilinged room in front of a stunning fireplace and ornate mirror.

As  Audrey’s brother walked the beautiful bride down the aisle I think it all became very real and emotional for her. 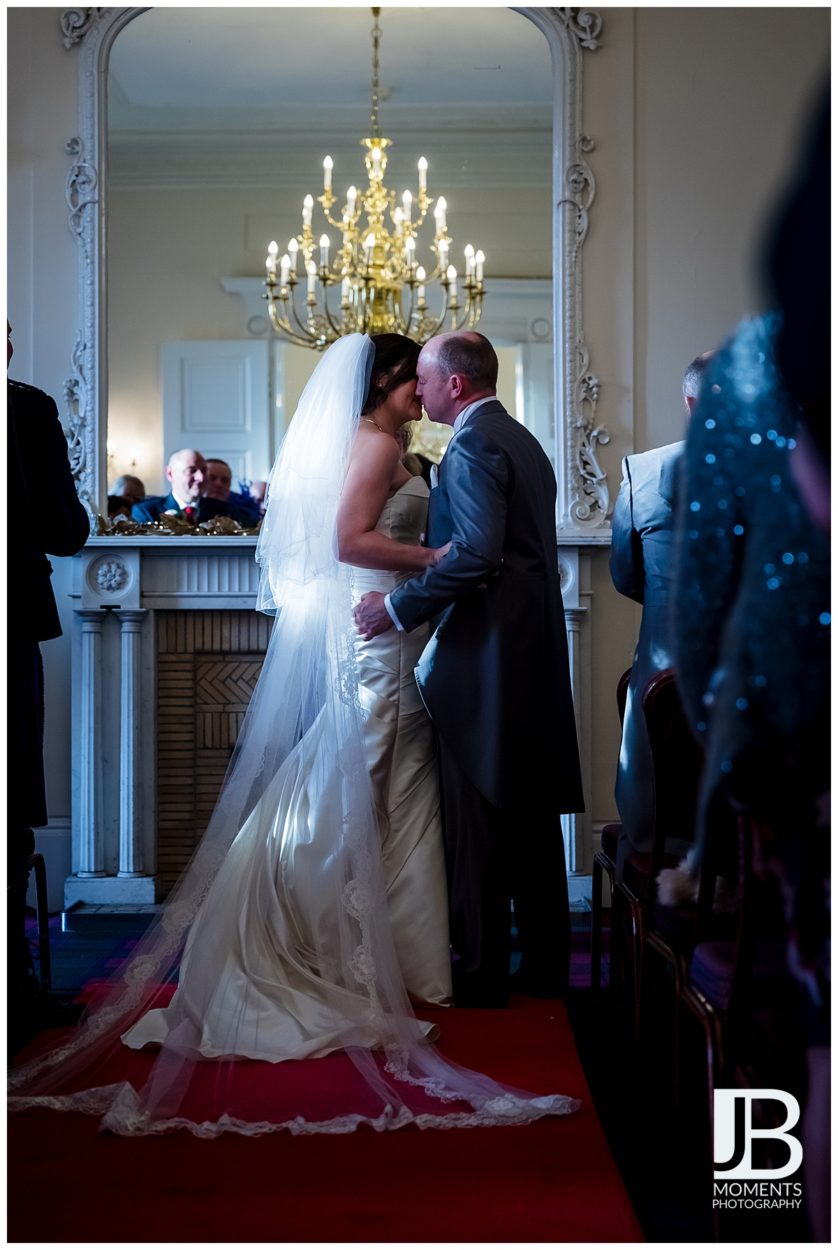 The minister soon helped to calm any nerves and had the couple (and the congregation) laughing and singing during the service.

Due to that big and beautiful mirror above the fireplace, I spent most of the service on my knees in order to make sure I wasn’t captured in the reflection! I did like the perspective it gave the images though.

Whilst the new Mr and Mrs Aiken signed the register with the bridal party Audrey’s cousin sang for the wedding guests. A very talented family (more on that later).

There were c. 100 guests during the day to celebrate the union between Audrey and Johnny. Sometimes this sort of group size brings me out in a cold sweat as the venue doesn’t always have a great space to capture the group photos in a pleasing way. For this wedding, I had no such issues. The steps outside the old castle are just perfect. 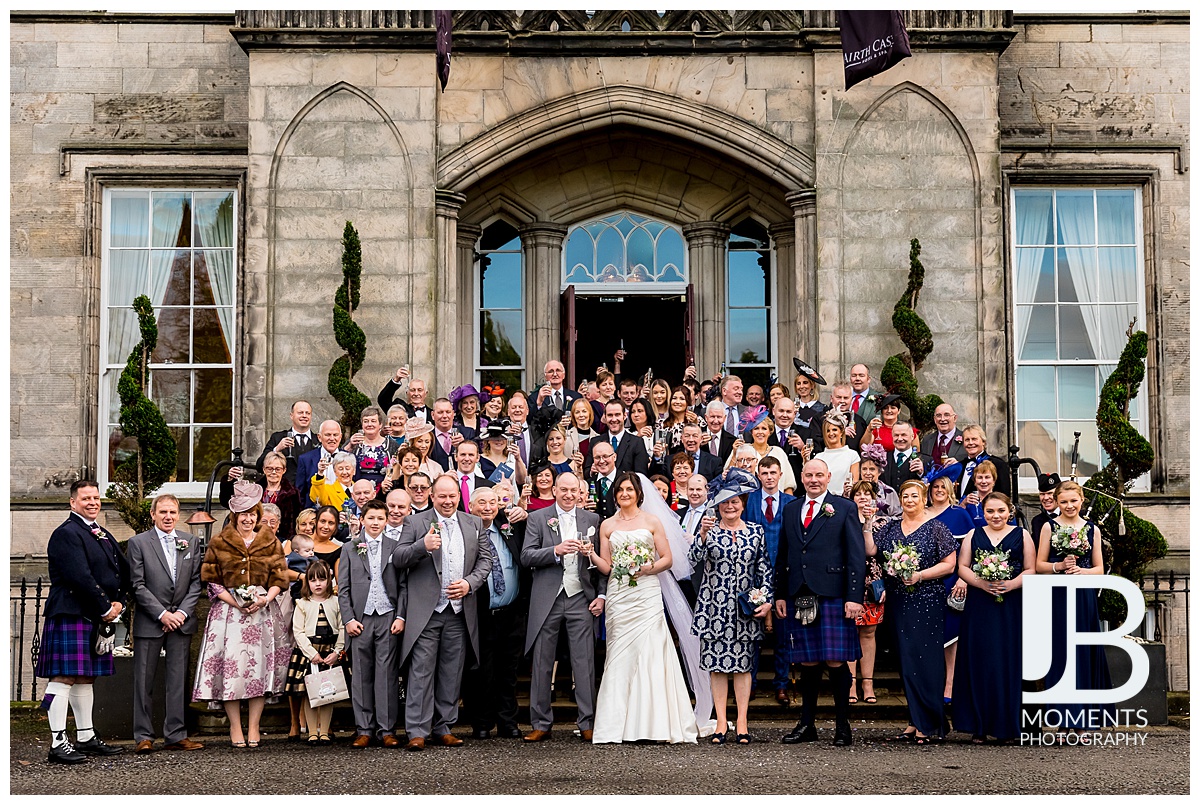 Despite being mild for the time of year it was still too cold to keep everybody outside for long. When I had met Audrey at the venue for our pre-wedding consultation I had decided that one of the formal reception rooms would be perfect. Once I did a little rearranging of the furniture and lugged the wing-backed chairs over to the fireplace! 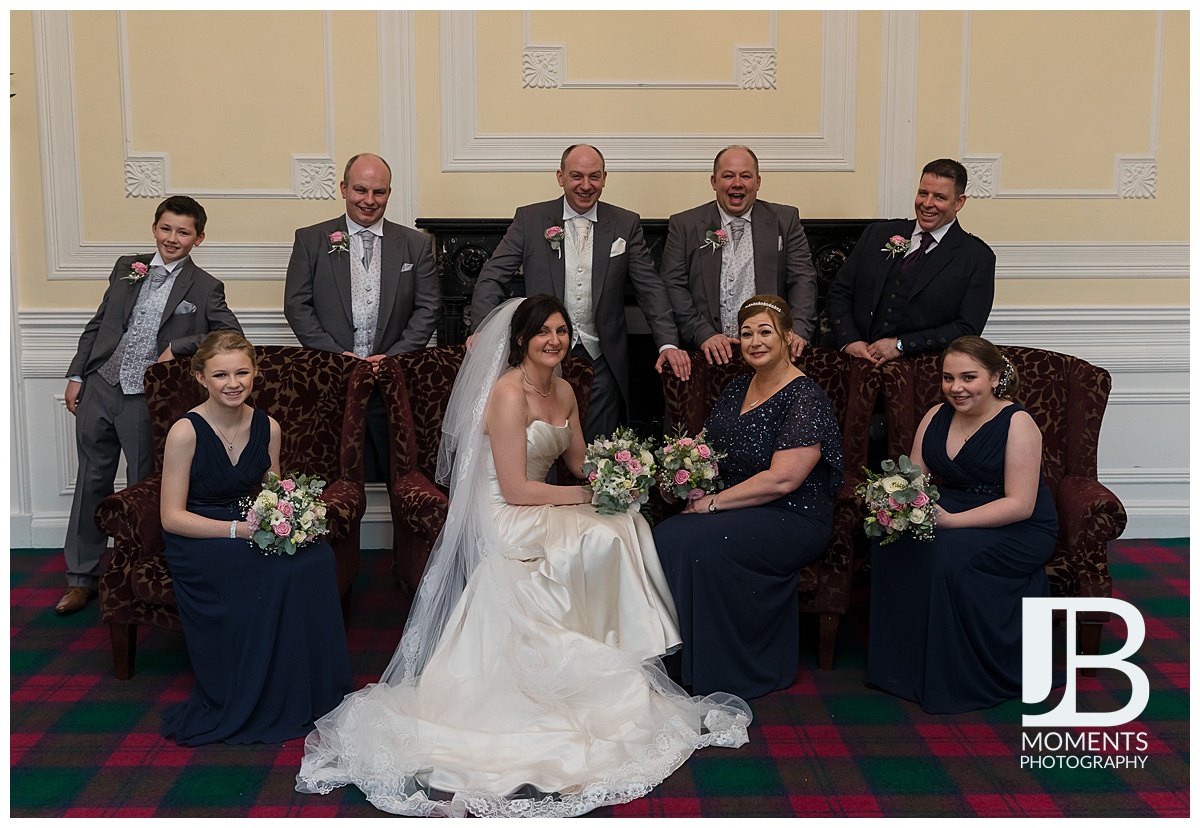 I think the images have a slight royal wedding vibe! Love it 🙂

A new version of a classic

Also at the pre-wedding consultation, Audrey’s mum mentioned an image from her own wedding that she would love Audrey to recreate. She was stood at the top of the staircase and her beautiful veil was the star of the show. As Audrey was using her veil it would be nice to do it again.  We found a suitable staircase in the castle and I hope I’ve done it justice. 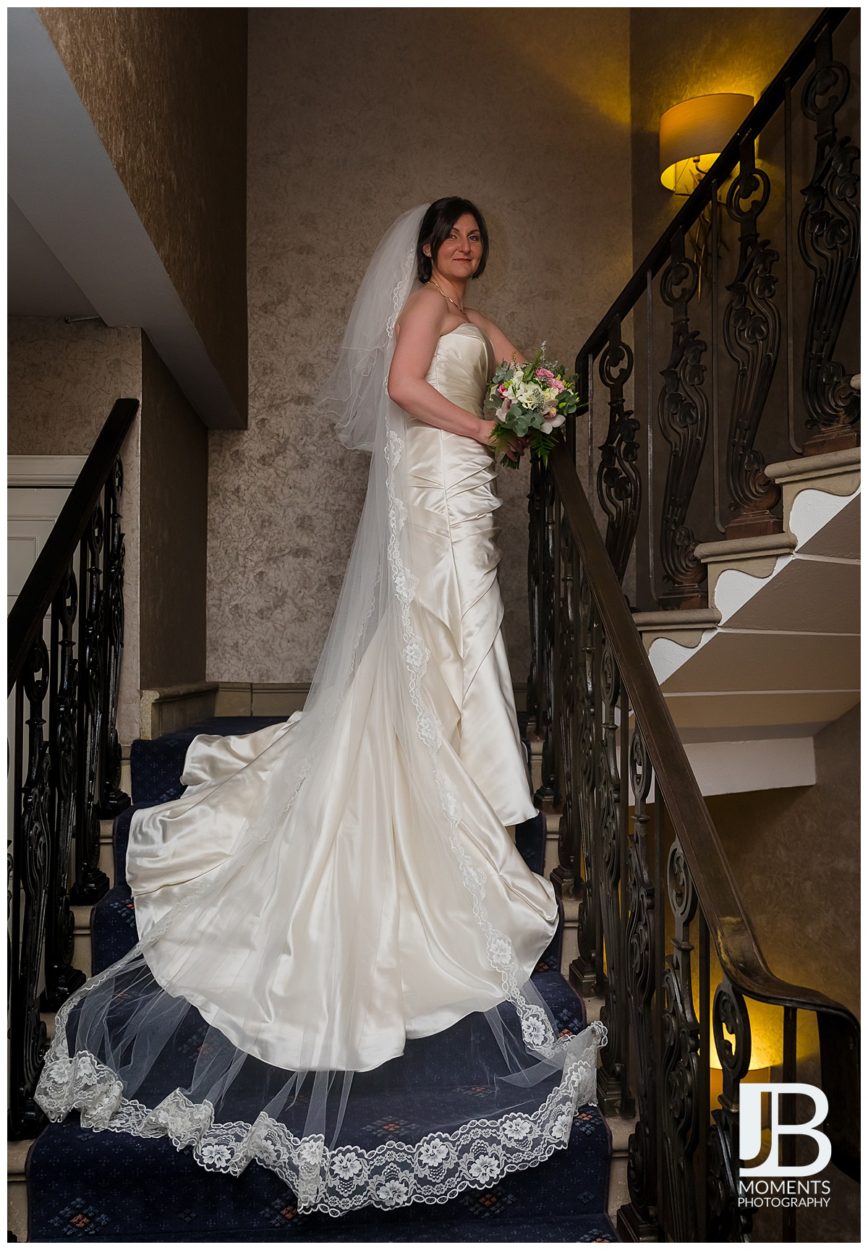 Whilst we were wrangling the stairs we also made use of the top balcony for some bride and groom portraits. 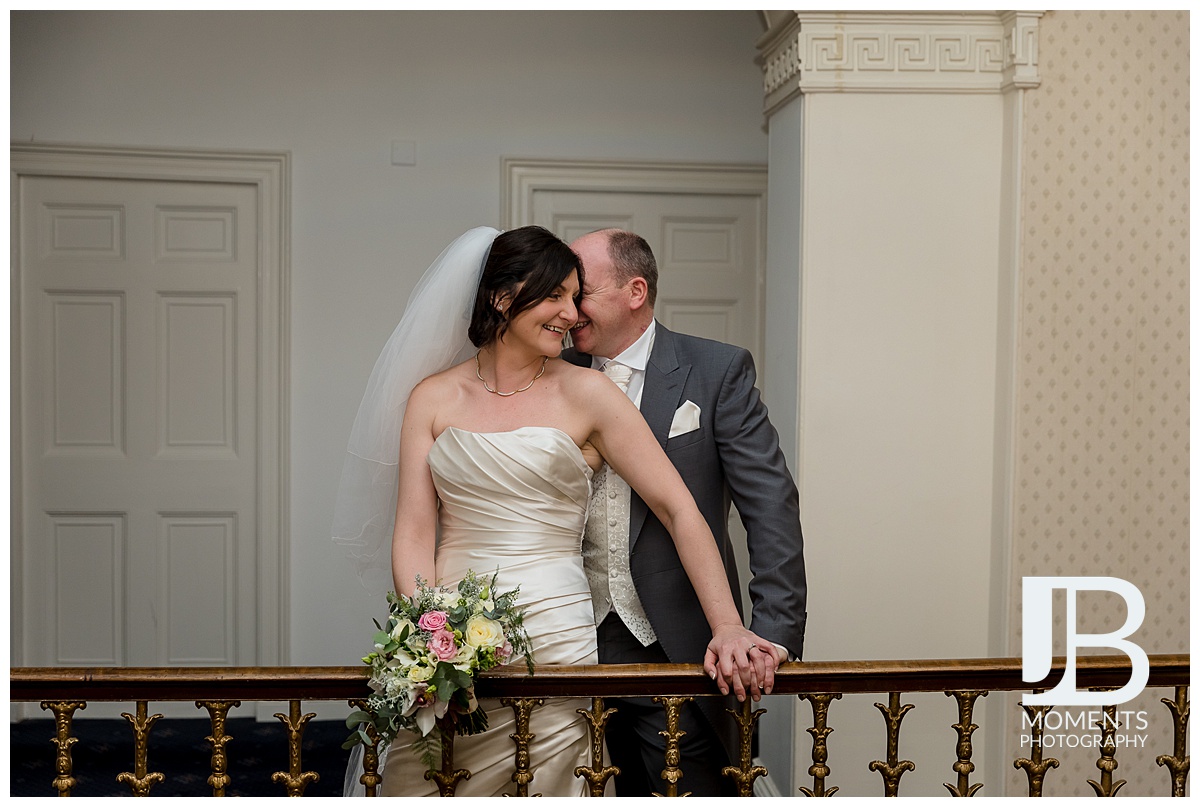 As I am mean I still got the bride and groom outside for some natural portraits and I just love the results. 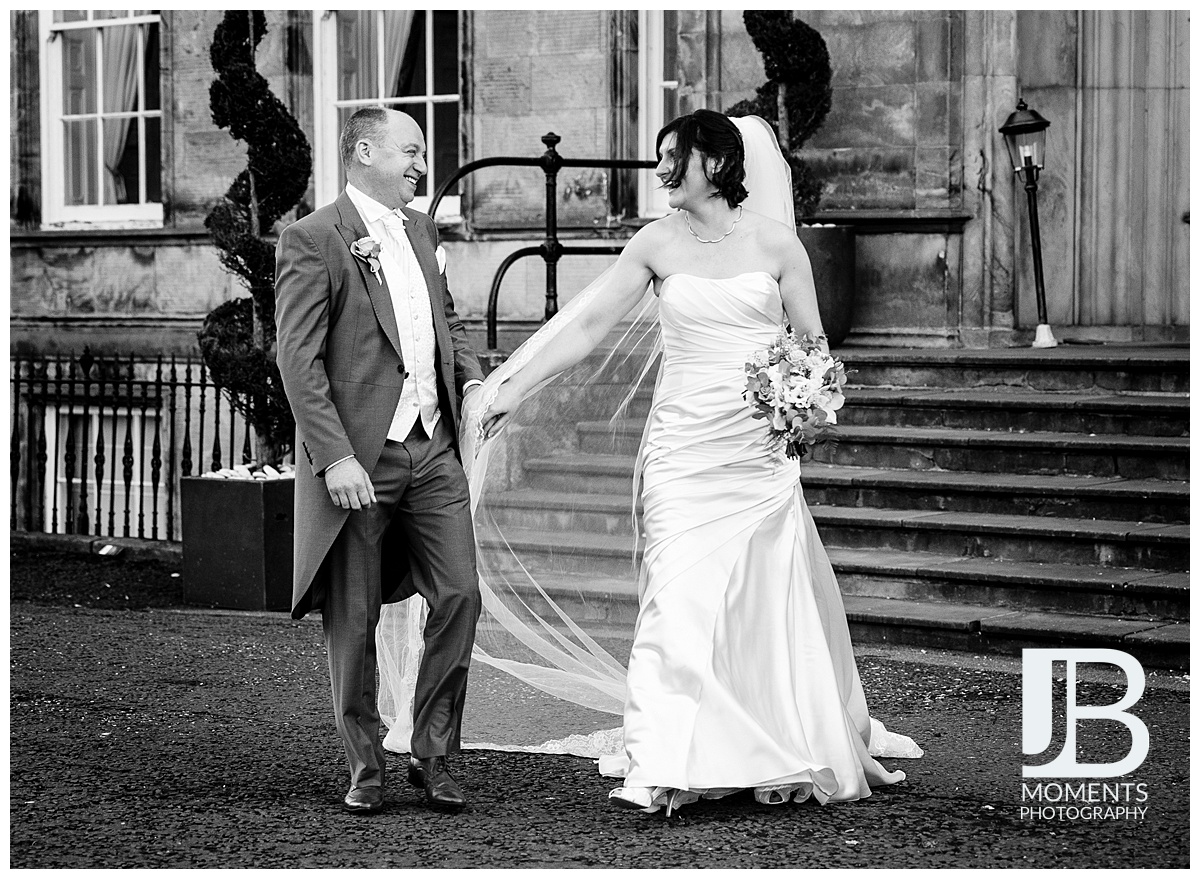 Ohhh emmm geee the speeches! Full kudos has to go to Johhny’s brother for his best man speech. So much planning had gone into it. Shortly after he started his speech he claimed he couldn’t find his remaining notes. He dashed out of the room and a pre-made video started of him ‘allegedly’ running out of the venue into his car back to his house and various other places to the tune of the Benny Hill theme tune!!! I can’t share what he got up to in the video here (keeping it PG, folks) but everybody was in absolute stitches. 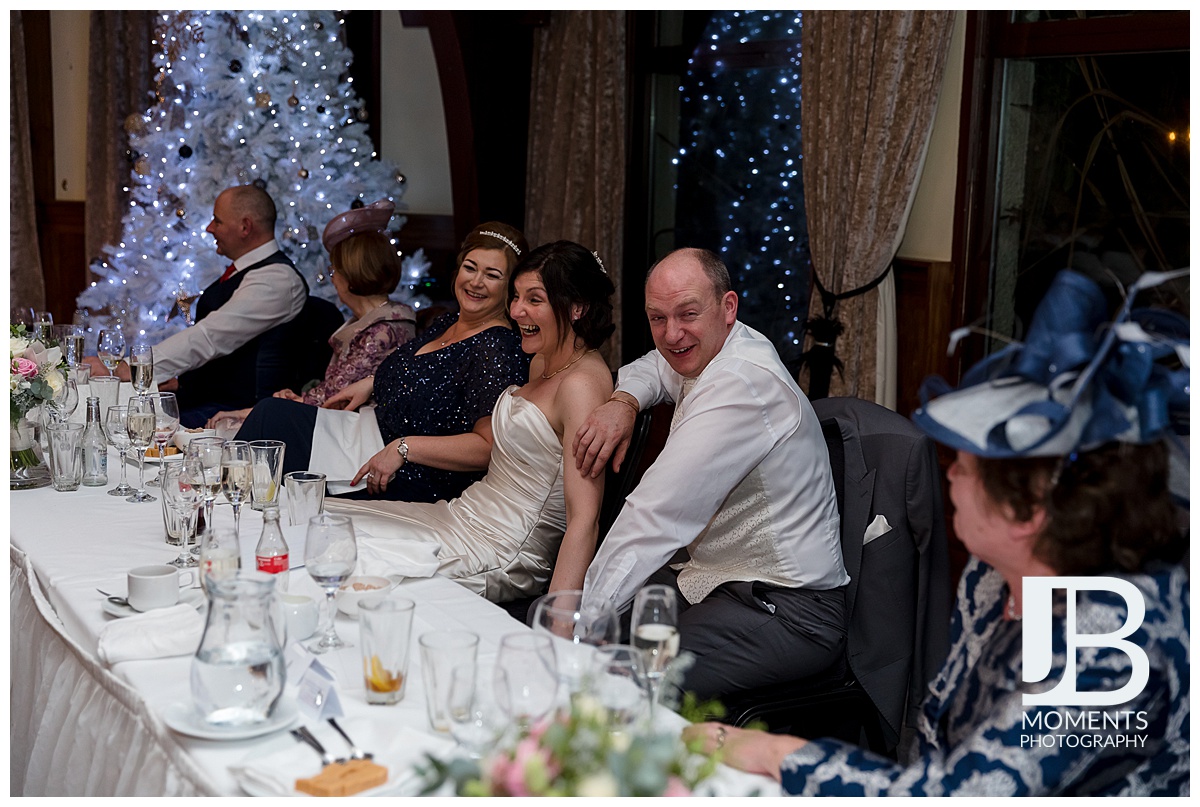 The video ended with him running back into the room and then his son and daughter (who was also a bridesmaid) read out a poem they had written. Everyone was laughing so hard, including me – it was difficult to stop my camera shaking! 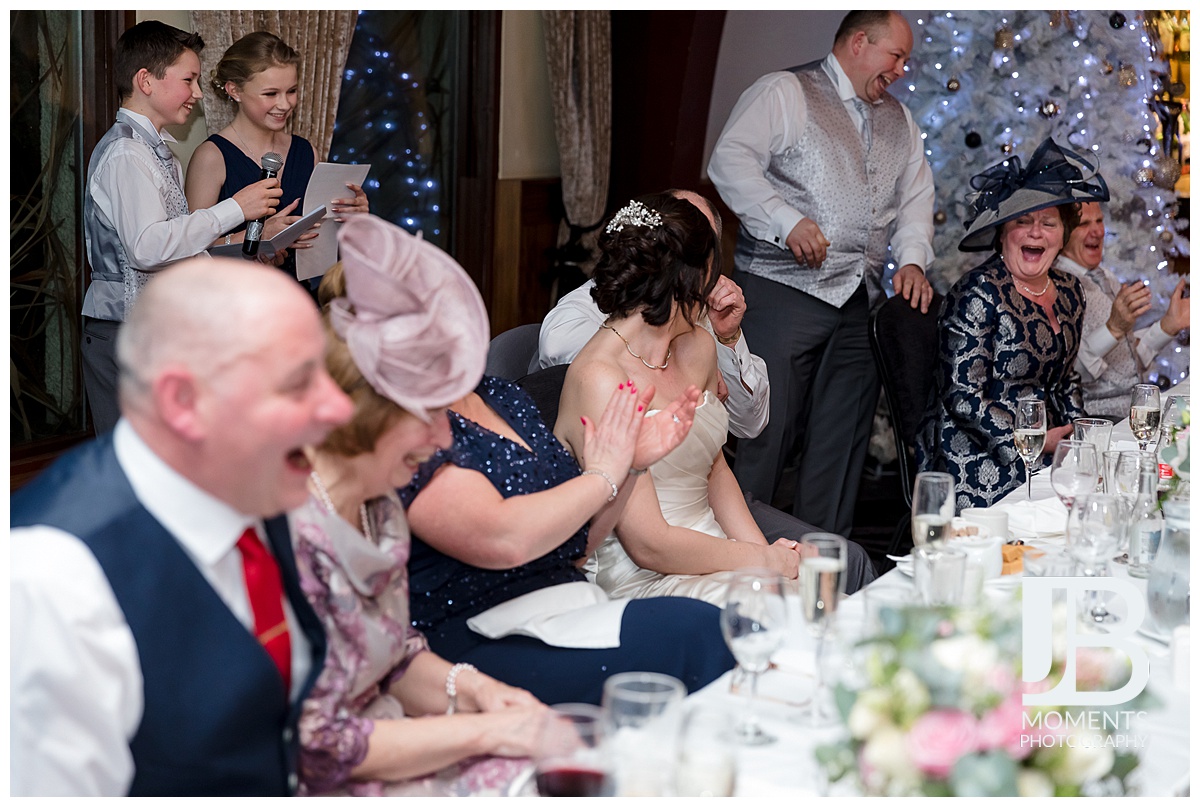 It was also during the speeches that I learned that Audrey had come 2nd in the world sheep handling trials. Told you it was a talented family!

Let them eat cake and dance

With the evening guests arrived it was time to cut the stunning three-tier cake decorated with thistles. 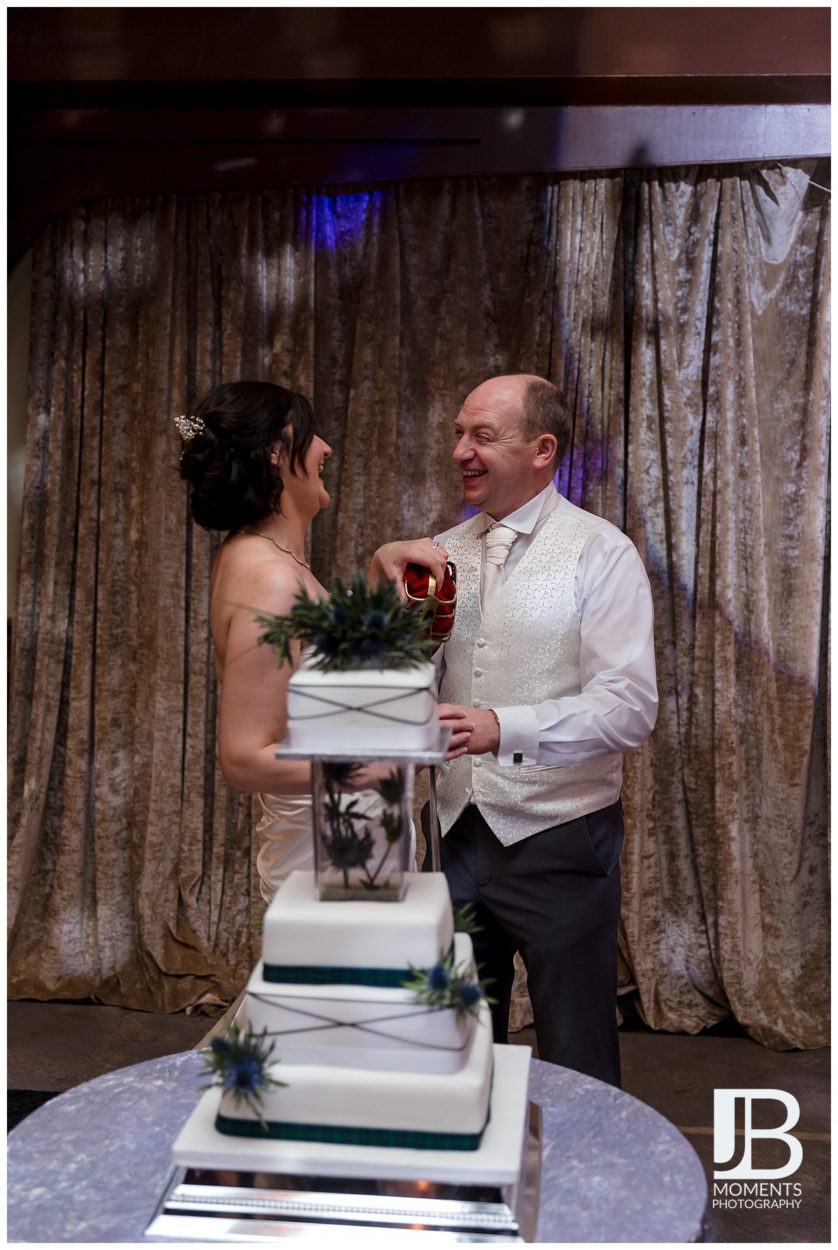 Then Audrey and Johnny’s first dance as husband and wife. 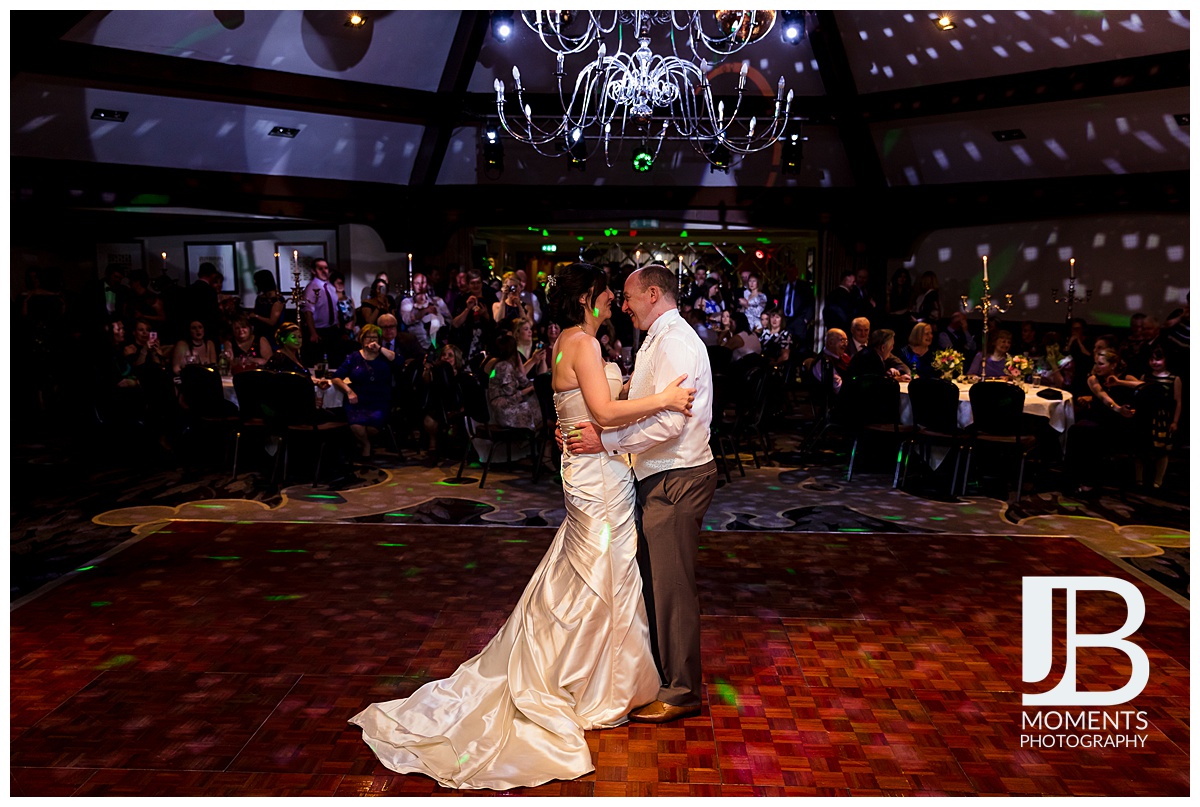 This wedding was an absolute joy to capture. So much love, laughter and well wishes emanated from all their family and friends as well as the couple themselves. It was time for me to take my leave but the party looked set to run well into the small hours. 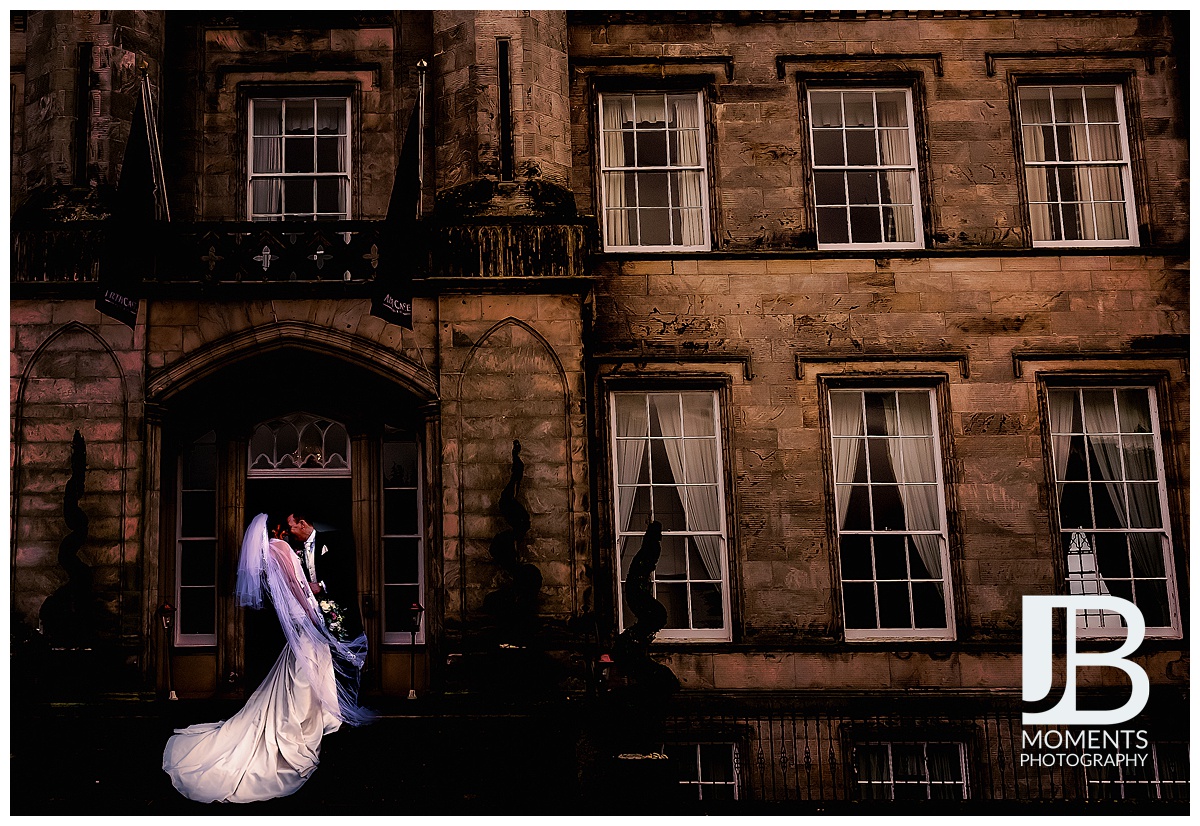