“Now that I know you are mine you bring me your love and peace of mind. You see the real me and I know that you’re the key.” – Suddenly by Angry Anderson

Wait, isn’t that the song that Charlene & Scott got married to in Neighbours?

Yes, yes it is and all will become clear later on in this blog.

Pamela and Paul are amazing people that work for the NHS. They met in 2010, even though they were both working in different wards. They started chatting in the canteen and when Pamela’s bank card was broken, Paul did the gentlemanly thing and offered to buy her lunch. Fast forward 10 years and two kids later and on Christmas Eve 2020 Paul proposed.

How about this for a proposal? Remember the scene in the movie Love Actually when Andrew Lincoln’s character turns up at the door with music playing and shows Kiera Knightly cards with his love declarations written on them? Well with the help of their kids Lochlan and Emmylou Paul did that. At the front door. With the very last card reading, “P.S. Will you marry me?” Talk about the best wedding proposal ever!

Wet Day for a Wedding

By the day of the wedding, it had been raining nonstop for about 4 days and there were floods all over the place. At one point I thought that Pamela and Paul were going to begin married life on some sort of ark!

Luckily their chosen wedding venue Dunblane Hydro has loads of gorgeous spaces indoors for photographs and whilst I may have mourned for a nanosecond about not getting pictures on the steps at the front of the hotel – I had a plan up my sleeve.

It was all go in the bridal suite when I arrived. So I got straight to work capturing memories. Pamela, Paul,and their family had made so many personal touches for this wedding. 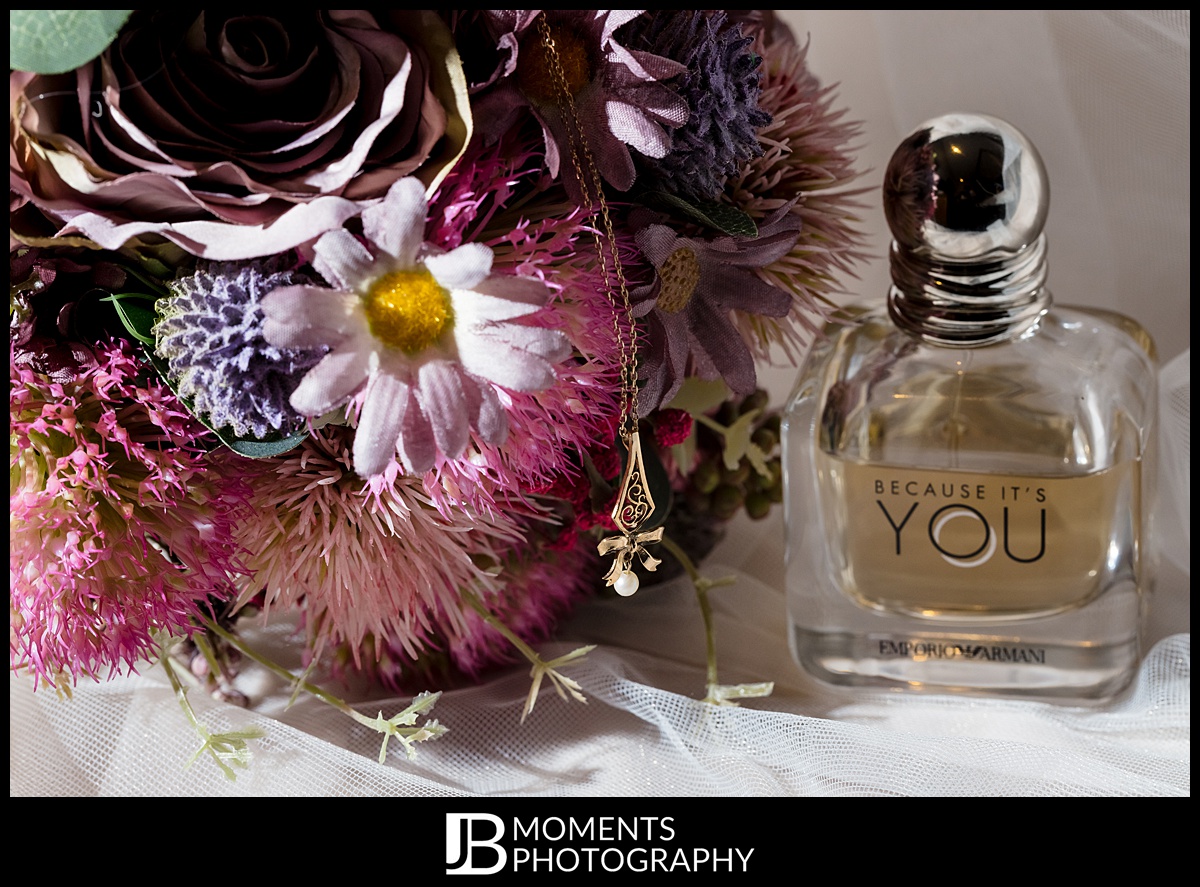 Pamela made the wedding bouquets and buttonholes as well as making and decorating the post box for their wedding cards. The pendant she chose to wear was her mum’s that her mum had received from her parents when she was a young lady.

Pamela’s mum had also had embroidered hankies for all the bride squad including Emmylou. Something they were all going to need in a short while. 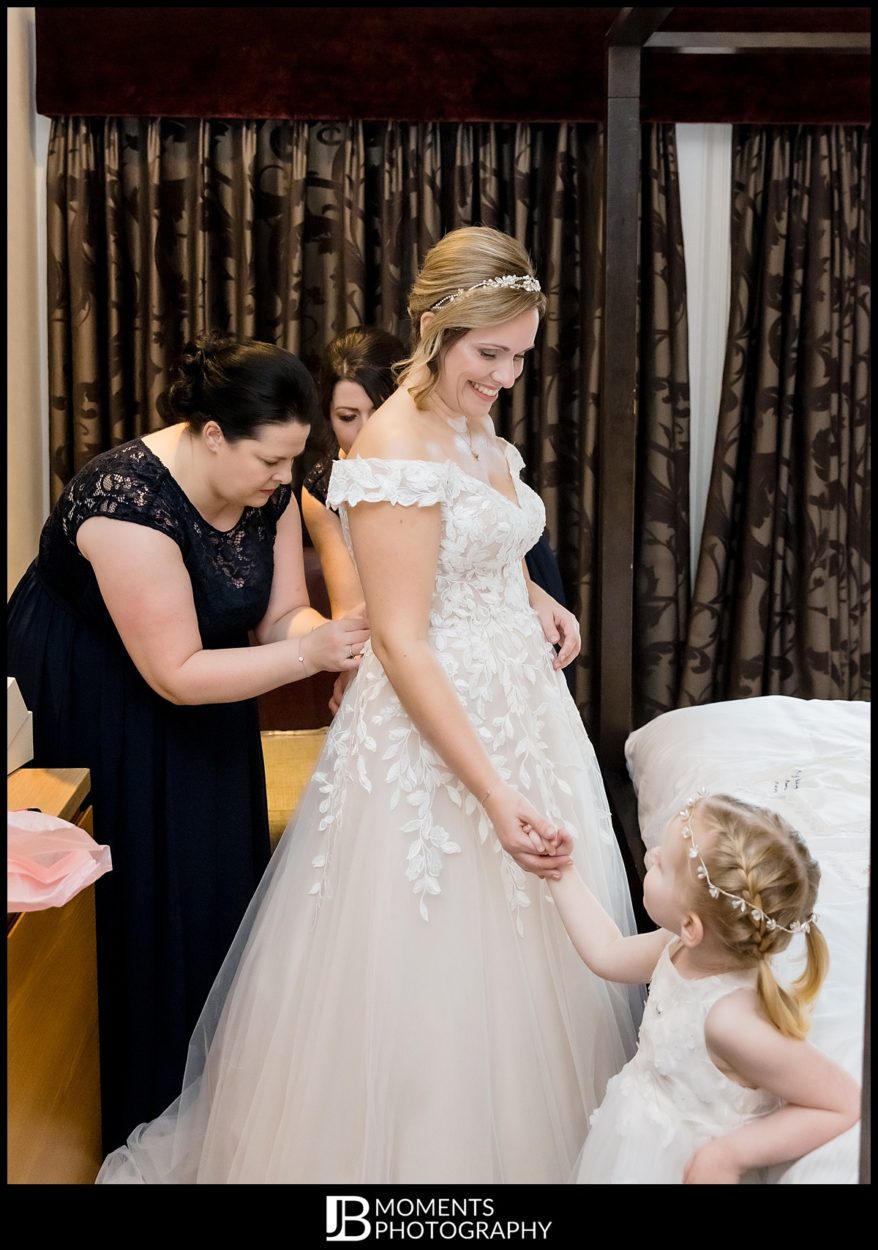 Pamela’s dress was a gorgeous whimsical affair and I just love this tender moment with Emmylou.

Paul had a whole groom squad to help him and two best men. 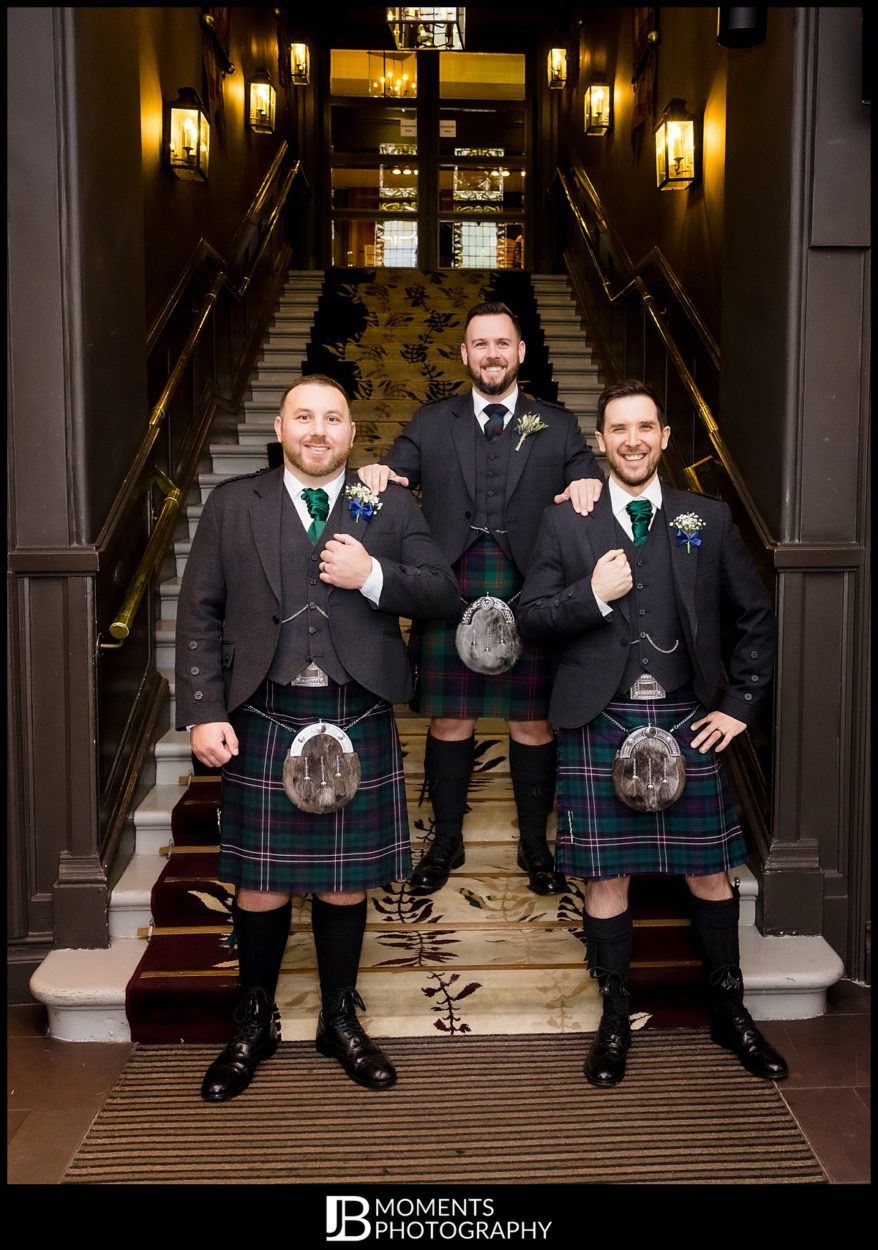 All of them looking very handsome in their kilts. Paul especially so (and no he didn’t pay me to say that!).

When people say you can feel the love in the room, it is often just a figure of speech. But in the case of Pamela and Paul’s wedding you really could feel it surrounding the couple and all their family and friends. 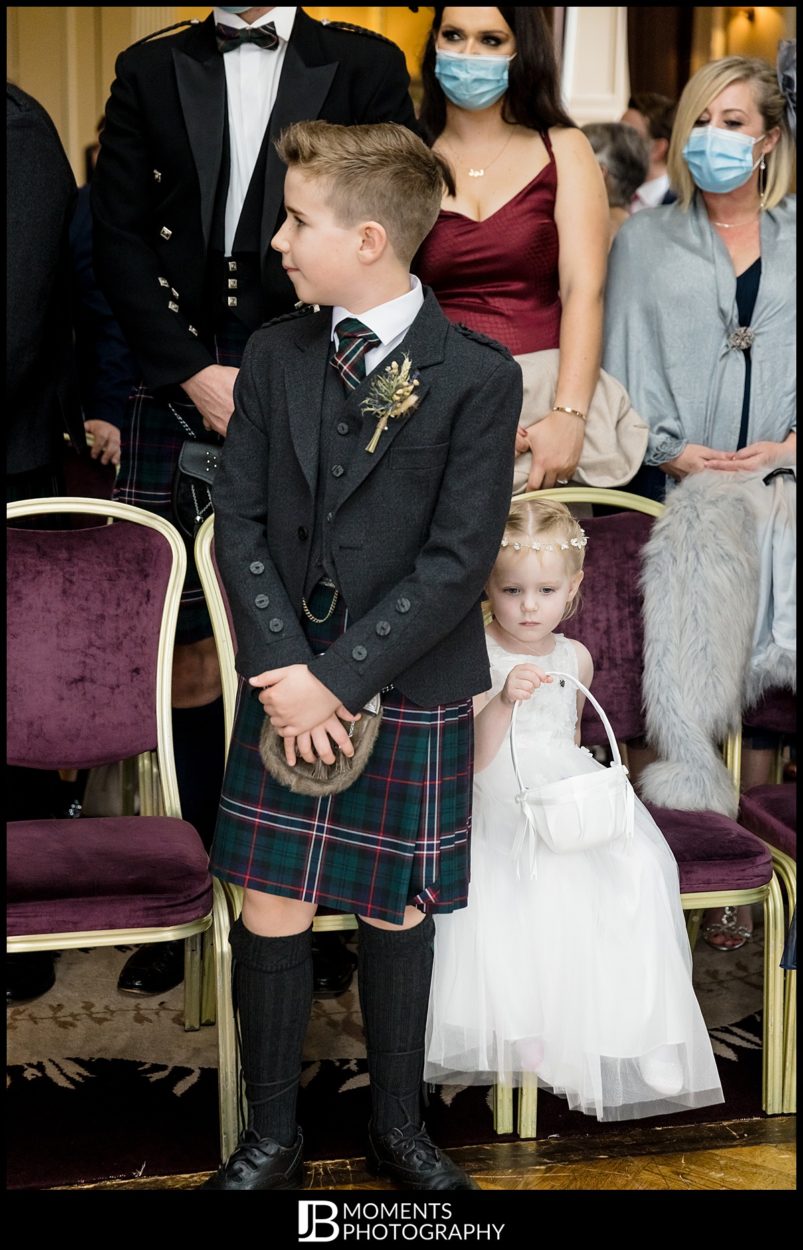 From the Awwww moment when Lochlan walked his wee sister Emmylou down the aisle. Then he got teary waiting for his mum to appear. 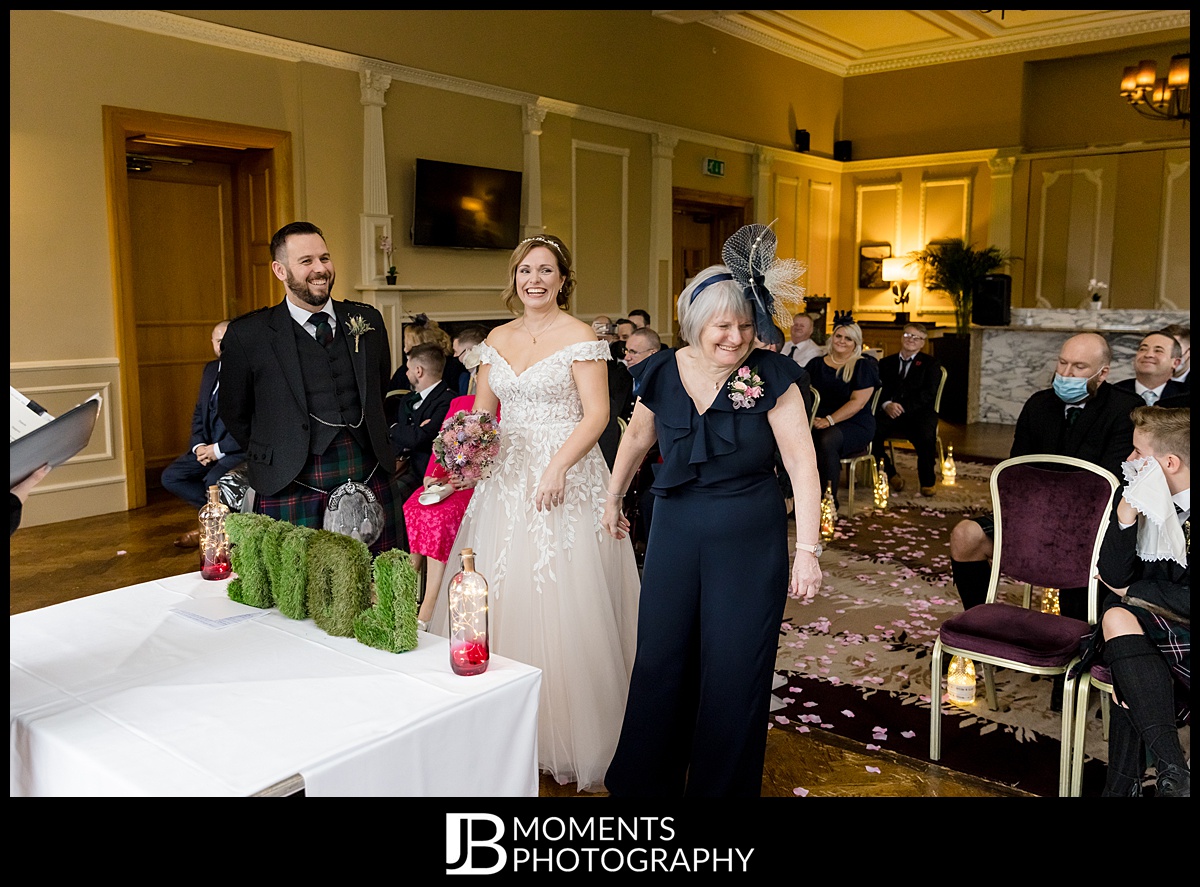 To when Paul first laid eyes on his beautiful bride, being given away by her mum. 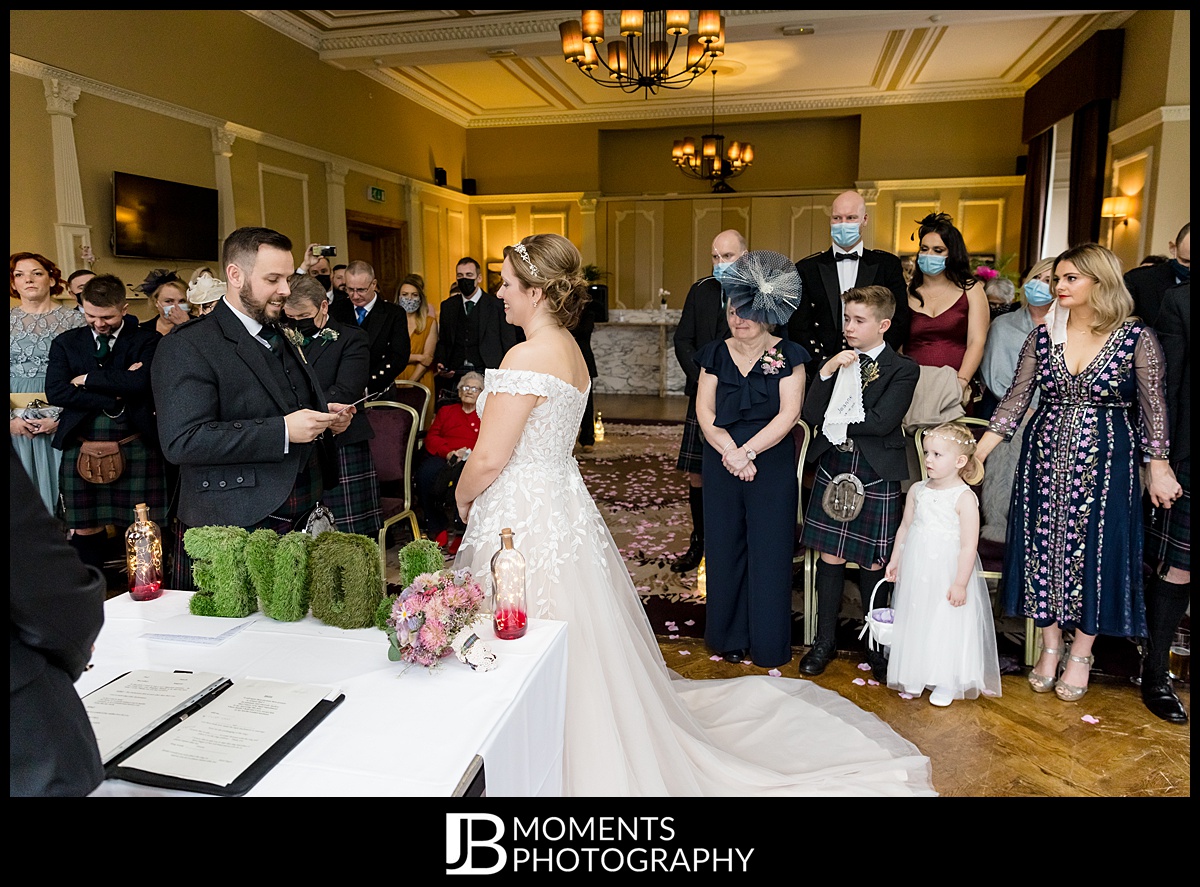 To the reading one of the groom squad gave and then the sweet vows the couple had written each other. There wasn’t a dry eye left in the audience. 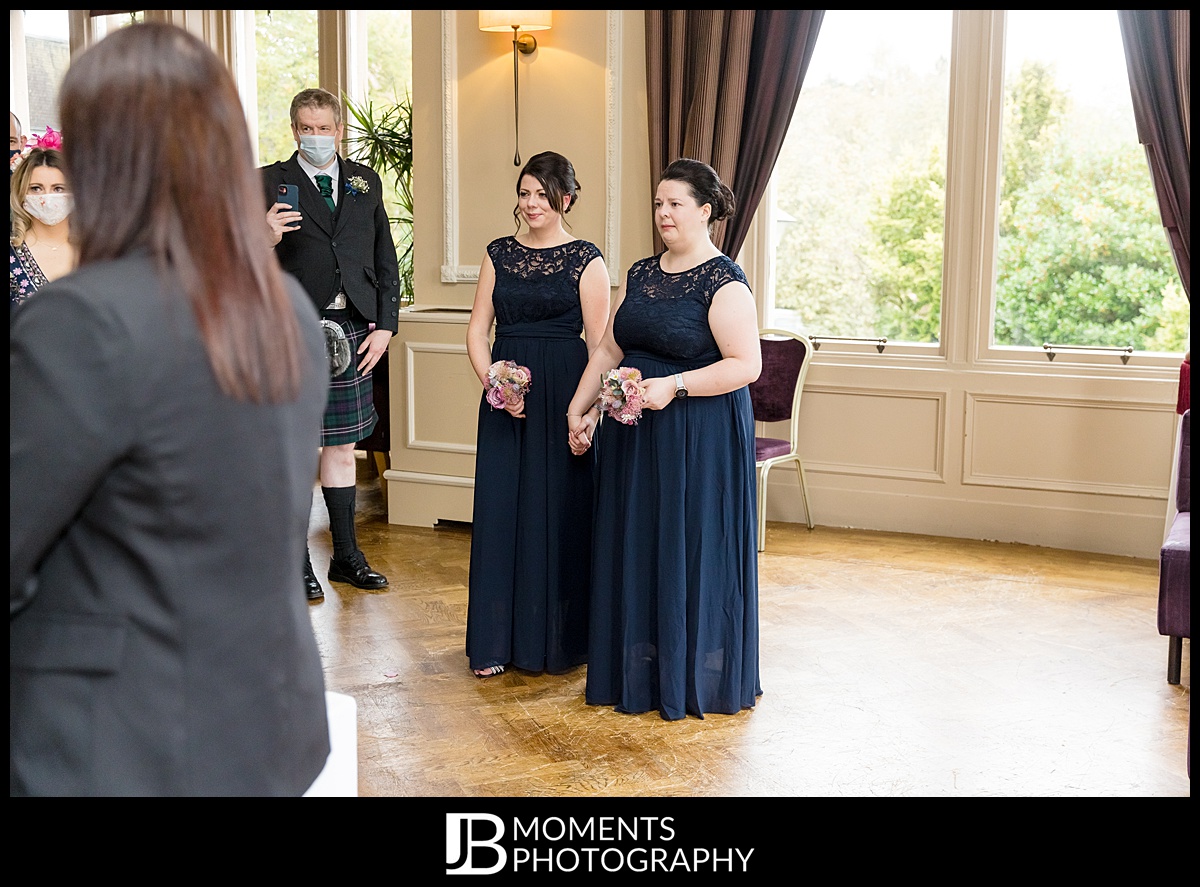 The bridesmaids were clinging onto each other to keep it together and somehow I managed to hold the camera steady as I started to get emotional! It really was a poignant, heartfelt ceremony. Finished with a burst of Suddenly by Angry Anderson and a confetti cannon (see it all makes sense now!). 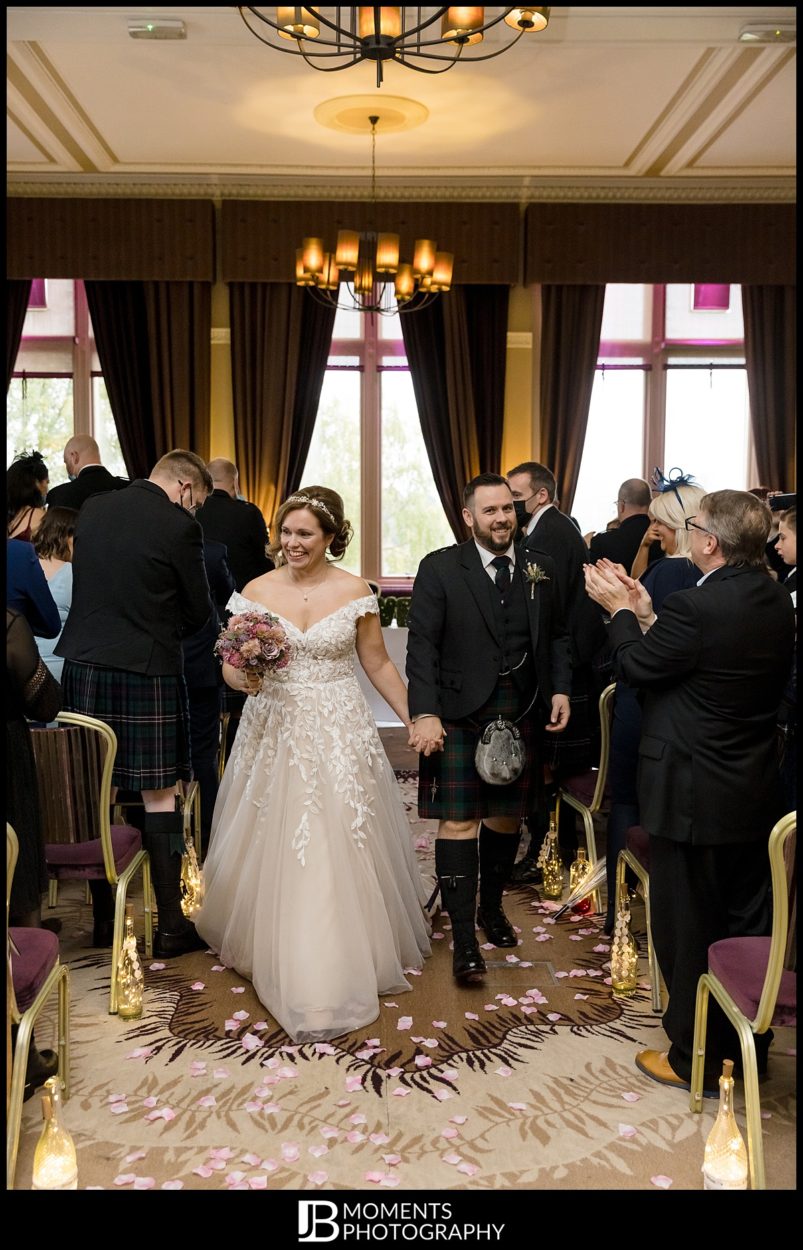 I honestly fely humbled and honoured to not only witness it but to be able to capture it as well. Proving once again that I have the best job, with the very best clients in the world.

Time for the group shots and I have discovered a new way of getting the whole group to smile at once…getting trapped in the automatic doors whilst trying to take their picture. Worked a treat!

One of the bar areas had a lovely bay window and it was perfect for the bridal party images. 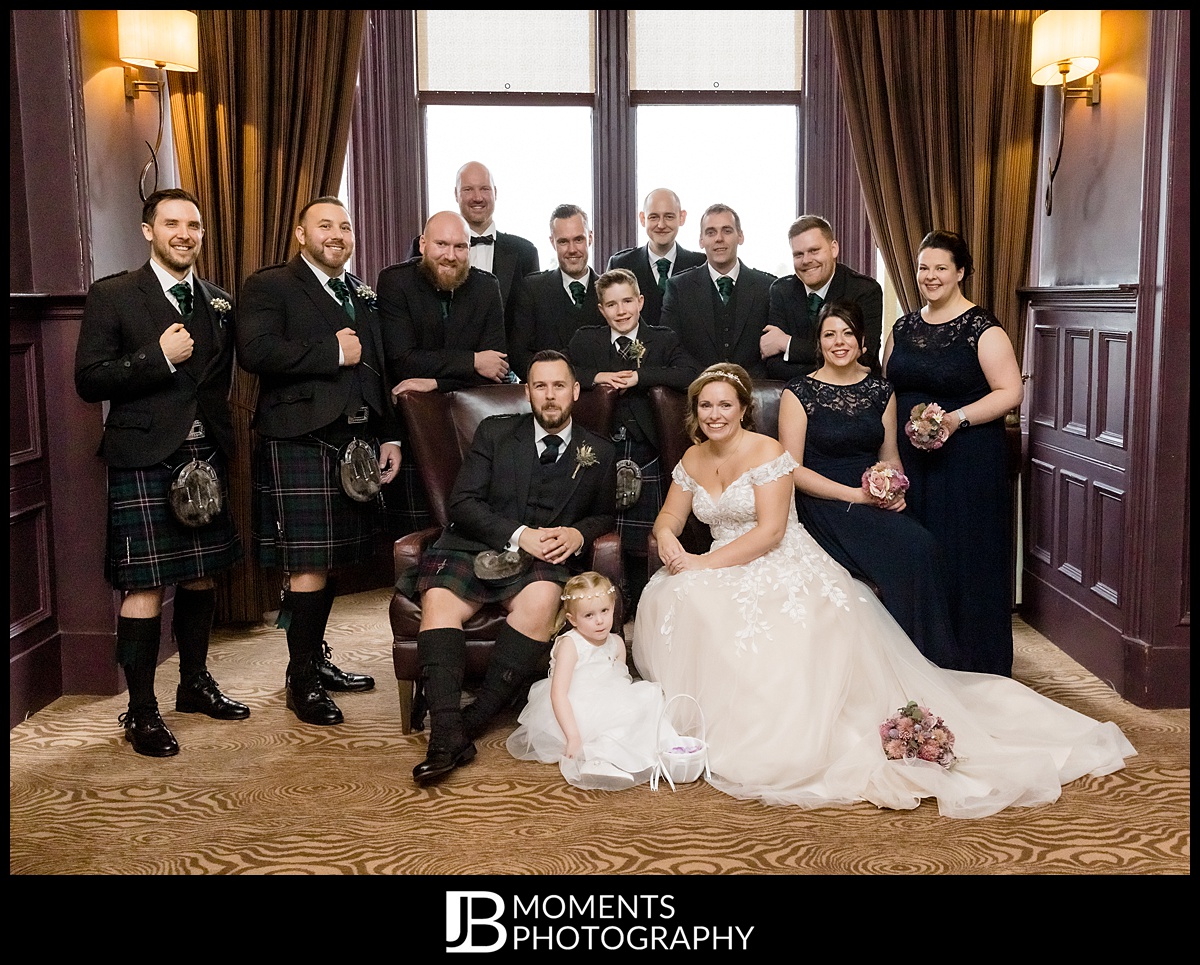 I feel like this has a Downton Abbey vibe going on. 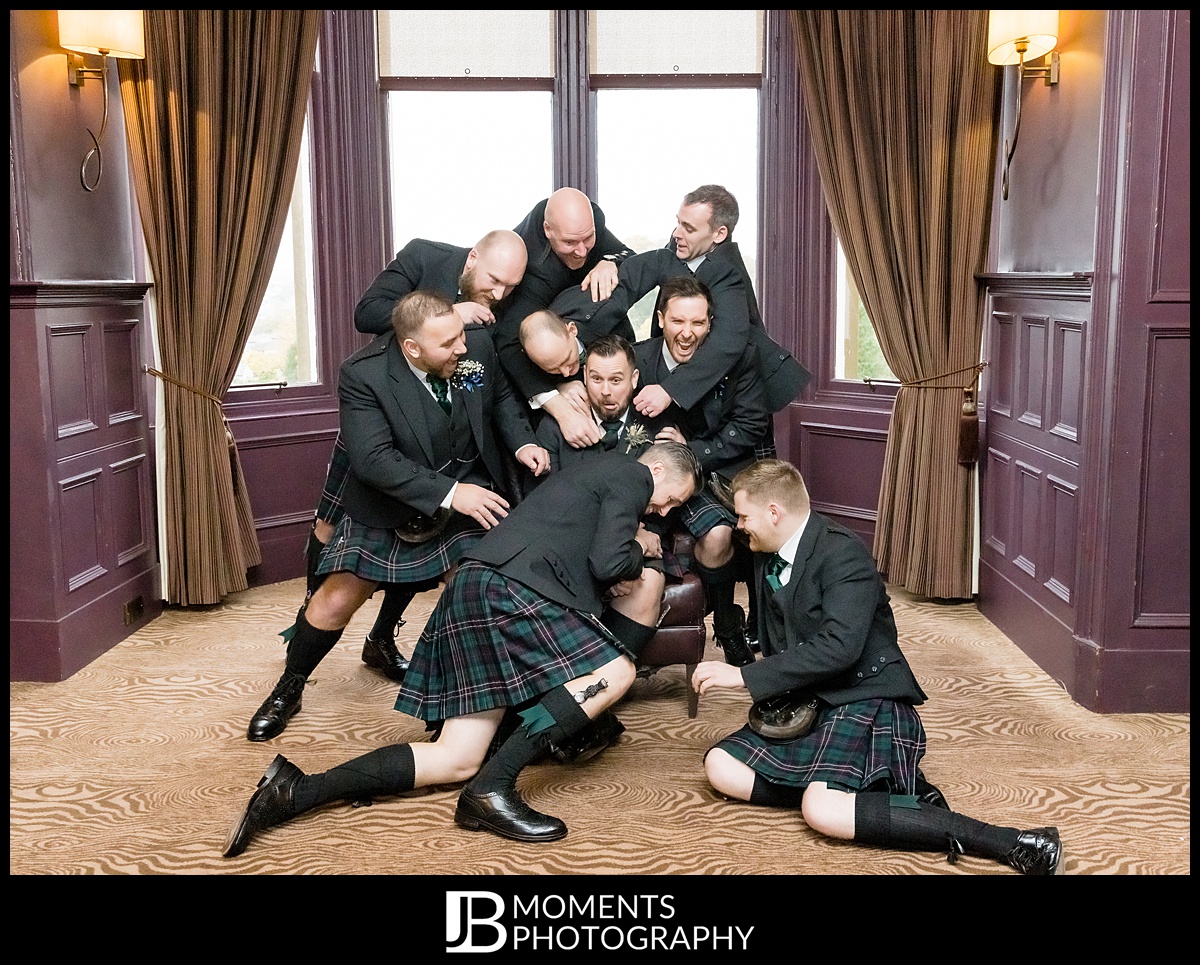 I had Paul’s groom squad stand all around him for a formal pose then I told them to rugby tackle him. Well, they didn’t need telling twice and piled on the poor groom! These guys are Paul’s ride or die guys that have been with him through thick and thin and their connection shows. 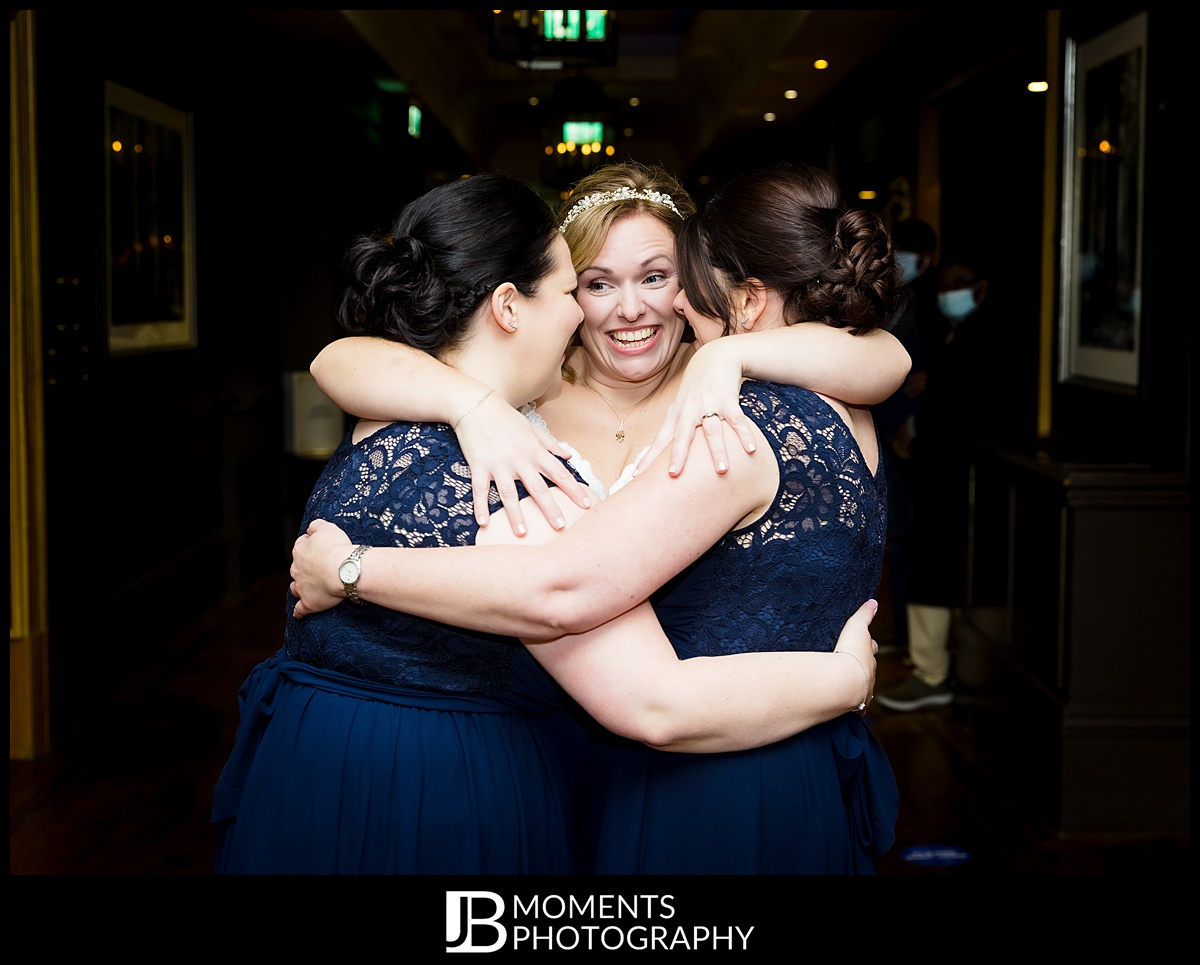 Likewise Pamela’s bridesmaids have been friends from school and are with her all the way.

But what about those steps?

Once we had completed all the formal images and group shots my couple wanted I asked if Pamela would mind getting the bottom of her dress a wee bit wet for a photo outside in the rain, under one of my wedding umbrella’s. Yes it was pishing it down but I had a vision of how good this picture would look… 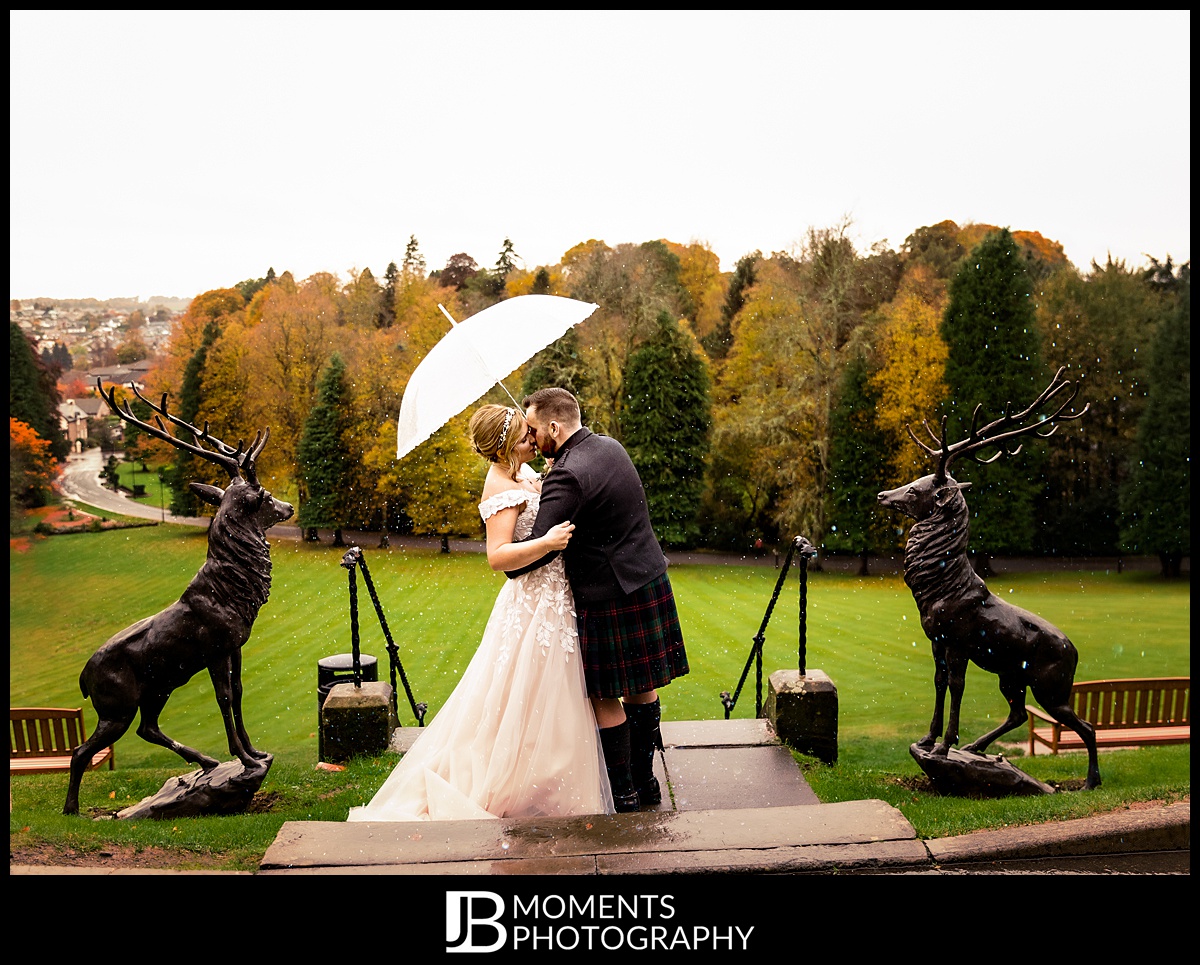 …and they absolutely nailed it!

Paul made and decorated the wedding cake. Three sumptious tiers of lemon and poppyseed, red velvet and chocolate and guiness flavour. 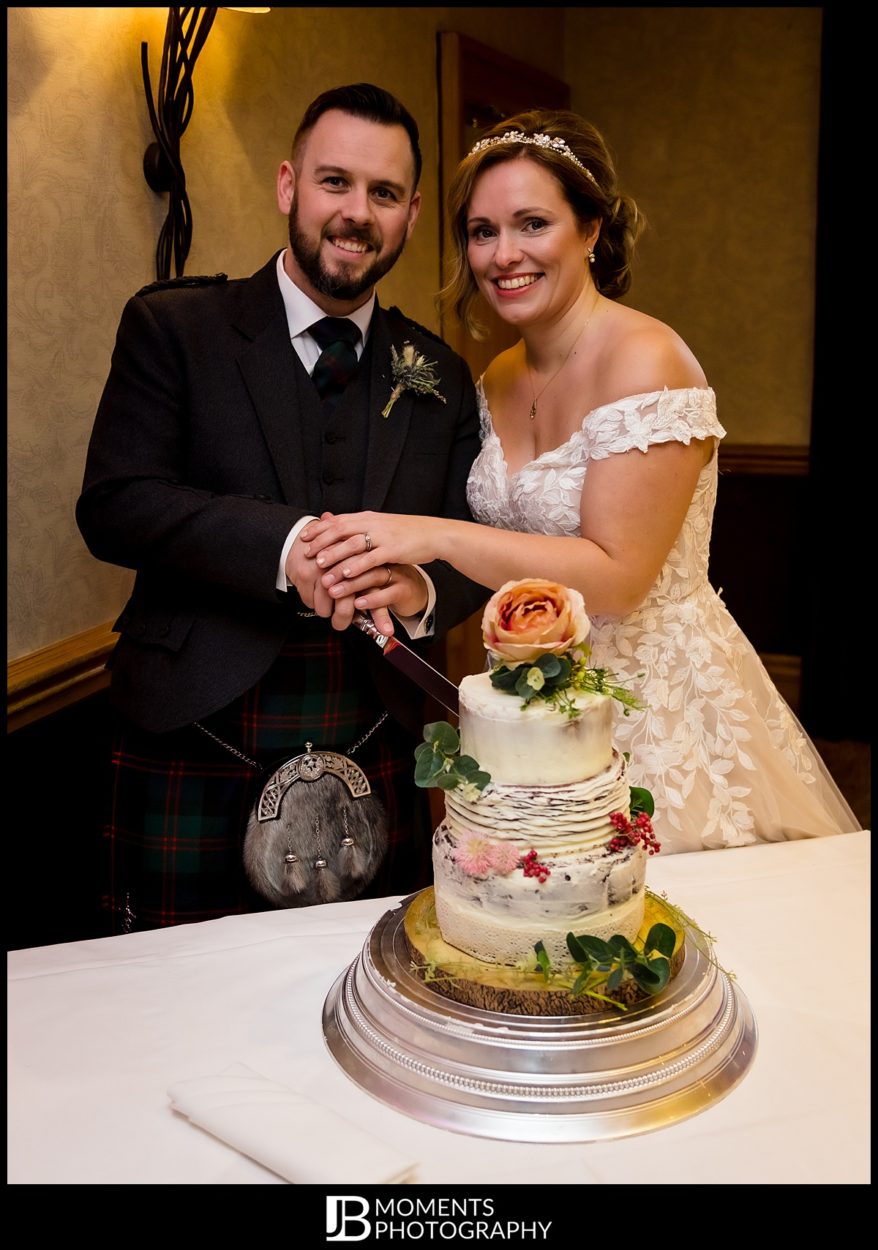 I bet it tasted as good as it looked.

Just when I thought everyone (including me) had pulled themselves back together emotionally, it was time for the speeches! 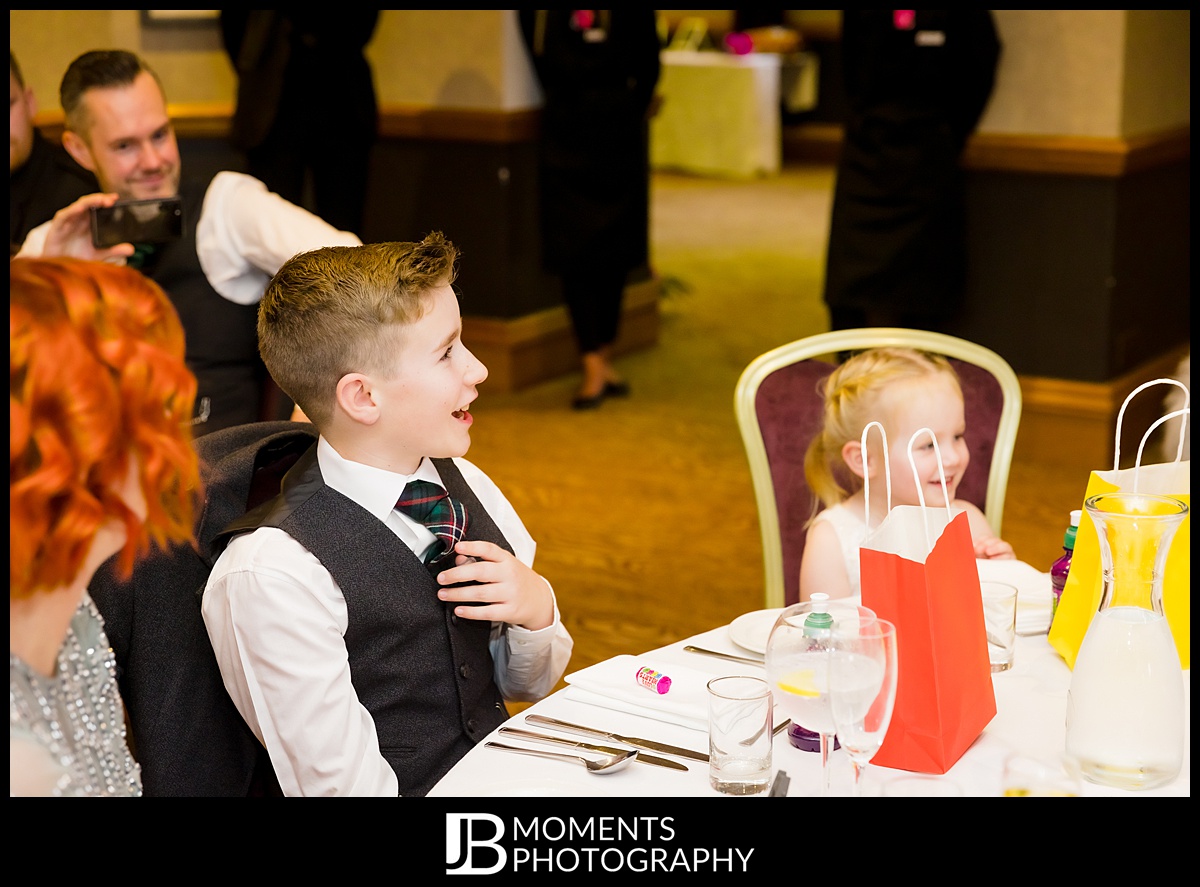 Paul and his two best men also gave good speach. So much so that everyone was welling up again. 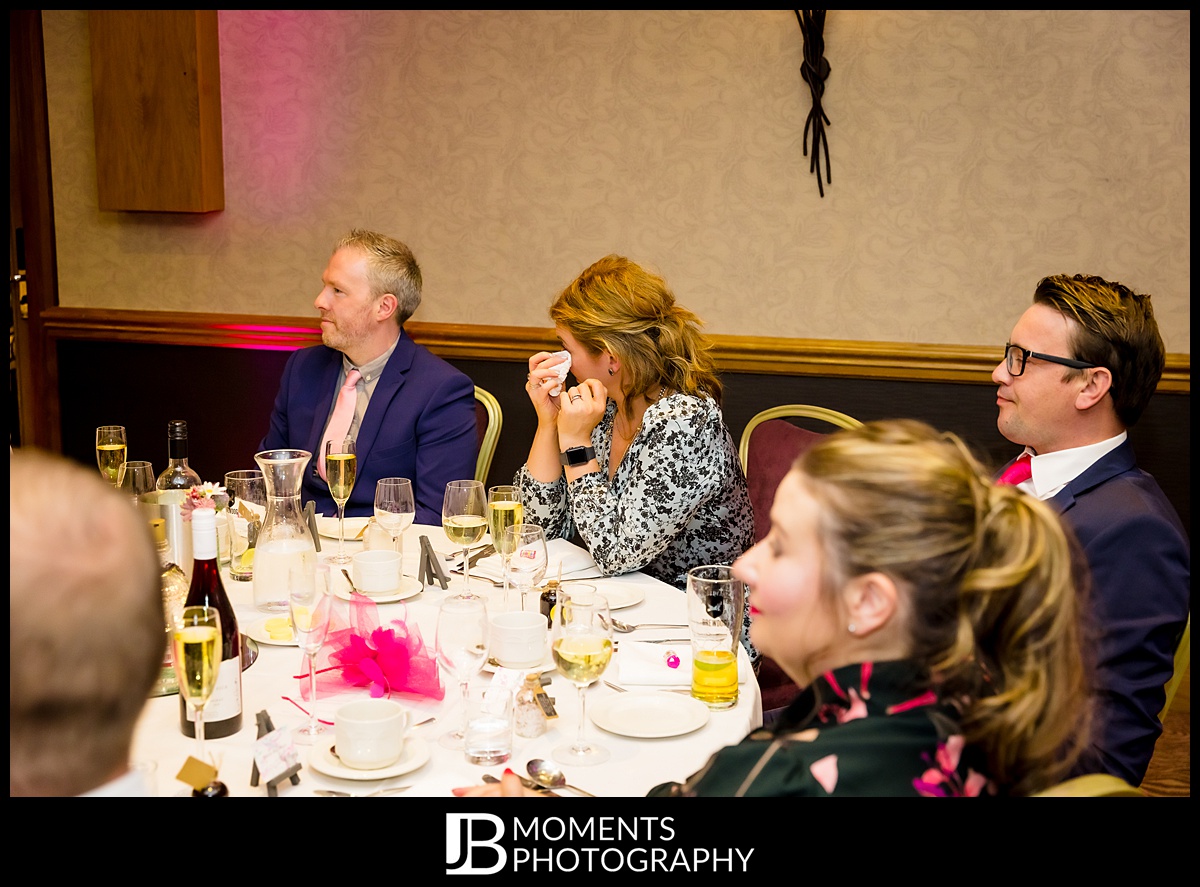 I had a wonderful time capturing this wedding. Pamela and Paul’s love for each other, their kids and their family and friends envelops you like a warm blanket. 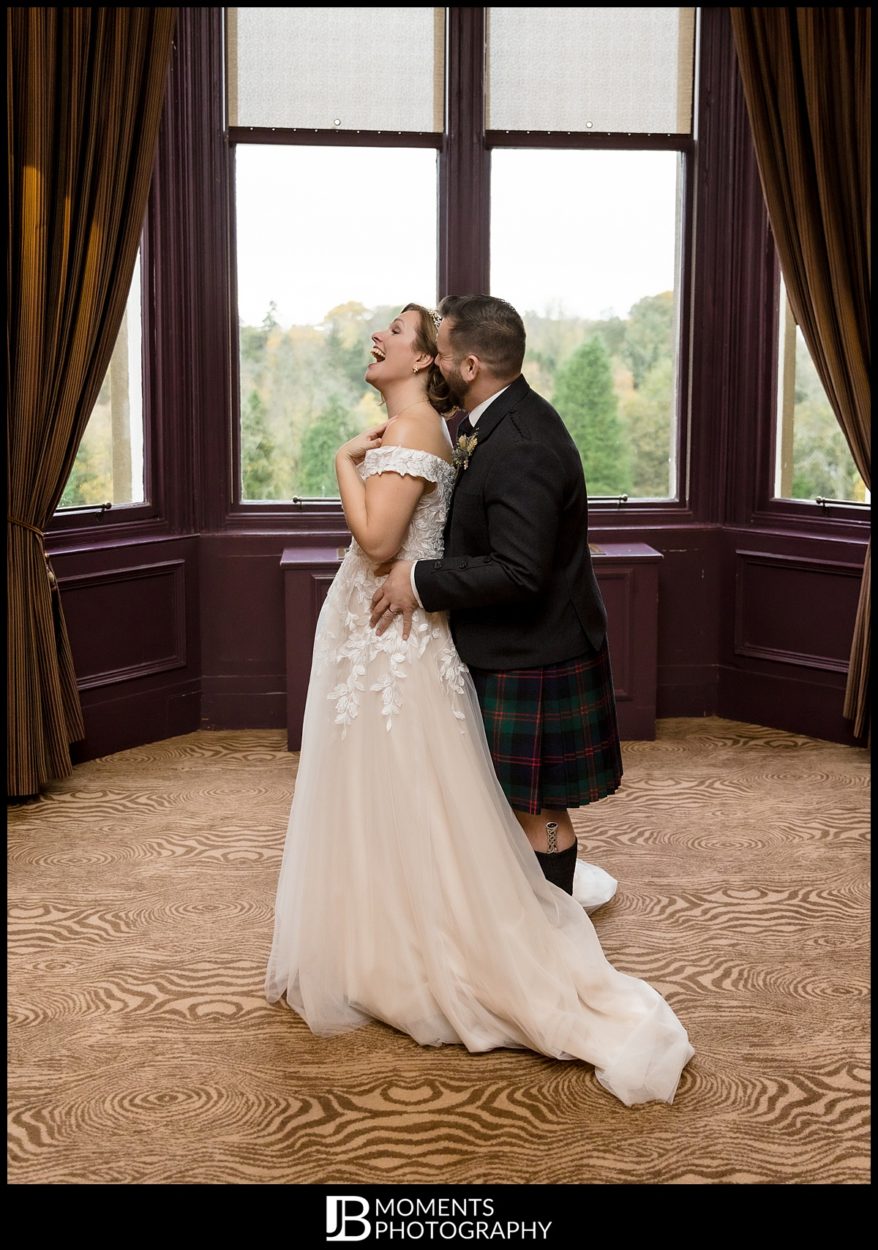